AF in patients with heart failure and reduced ejection fraction (HFrEF) is common and is associated with an increased risk of stroke, heart failure hospitalisation and all-cause mortality. Rhythm control of AF in this population has been traditionally limited to the use of antiarrhythmic drugs. Clinical trials assessing superiority of pharmacological rhythm control over rate control have been largely disappointing. Catheter ablation has emerged as a viable alternative to pharmacological rhythm control in symptomatic AF and has enjoyed significant technological advancements over the past decade. Recent clinical trials have suggested that catheter ablation is superior to pharmacological interventions in patients with co-existing AF and HFrEF. In this article, we will review the therapeutic options for AF in patients with HFrEF in the context of the latest clinical trials beyond the current established guidelines.

AF is the most common rhythm disorder. It is estimated AF will affect 6–12 million Americans by 2050 and 17.9 million Europeans by 2060.1–4 AF is responsible for significant morbidity, mortality and healthcare costs.5–7 Heart failure with reduced ejection fraction (HFrEF) is also a rising epidemic that will afflict over 8 million Americans by 2030.8 AF is common in patients with HFrEF9,10 and leads to increased risk of stroke, heart failure hospitalisation and death.11–13

Current Recommendations for Management of AF in Patients with HFrEF

The current American and European guidelines for AF management do not make specific recommendations for patients with co-existing AF and HFrEF (Figure 1). Rather, they suggest a strategy similar to that in AF patients with structurally normal hearts, combined with heart failure specific therapies.14–16 Rate control and rhythm control are considered to be equally effective and aggressive rhythm control is recommended only in highly symptomatic patients despite rate control. For sinus rhythm maintenance, pharmacologic rhythm control is preferred over catheter ablation. Amiodarone is recommended as the only pharmacologic rhythm-control agent in the European Society of Cardiology/European Association for Cardio-Thoracic Surgery guidelines, while either amiodarone or dofetilide are recommended in the American Heart Association/American College of Cardiology/Heart Rhythm Society (HRS) guidelines.14,15 Catheter ablation is recommended as a second line therapy unless it is the patient’s initial preference. In the 2017 HRS/European Heart Rhythm Association/European Cardiac Arrhythmia Society/Asia Pacific Heart Rhythm Society/Latin American Society of Electrophysiology and Cardiac Stimulation AF ablation guidelines, use of ablation for treatment of AF ablation in patients with HFrEF was again given the same recommendation as in patients with structurally normal hearts.16 In this updated guideline, ablation has been given class I indication in symptomatic paroxysmal AF when used as second-line therapy (failed medical management) and class IIa recommendation as first-line therapy. 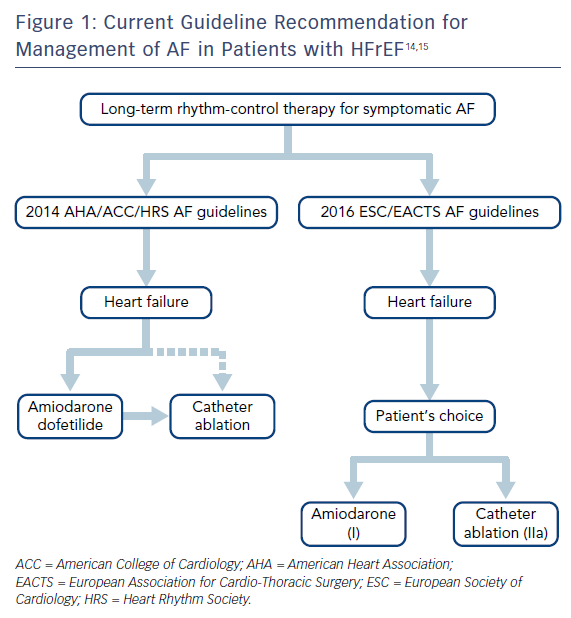 Two landmark studies have assessed the efficacy of pharmacological rhythm control in patients with concomitant AF and HFrEF (Table 1). In the Danish Investigators of Arrhythmia and Mortality on Dofetilide in Congestive Heart Failure (DIAMOND-CHF) trial,17 1,518 patients were randomised to receive either dofetilide (n=762) or placebo (n=758). At the conclusion of the trial, 65 % of patients in the dofetilide arm were in sinus rhythm versus 30 % of patients in the placebo arm. There was no difference in overall mortality between the dofetilide and placebo groups. Among the patients who were in AF at baseline, those in the dofetilide arm had lower rates of heart failure hospitalisation compared with those in placebo.

Pharmacological rhythm control for patients with co-existing HFrEF and AF is currently limited to amiodarone and dofetilide, with dofetilide mostly unavailable outside of the US. Class I antiarrhythmics, along with sotalol and dronedarone, are contraindicated in patients with reduced ejection fraction.19–23 Although amiodarone and dofetilide are safe to be used in HFrEF, dofetilide initiation requires initial hospitalisation. Amiodarone use is associated with a high discontinuation rate and is suggested to be associated with increased non-cardiovascular death.24

The DIAMOND-CHF and AF-CHF trials raised valid scepticism on the benefit of sinus rhythm maintenance over rate control in patients with co-existing AF and HFrEF. The reason for such a lack of clinical benefit of pharmacologic rhythm control may be in part due to the significant toxicity that is associated with antiarrhythmic drugs. Catheter ablation is an alternative means for sinus rhythm maintenance while sparing the patient from potential side effects of antiarrhythmic drugs. 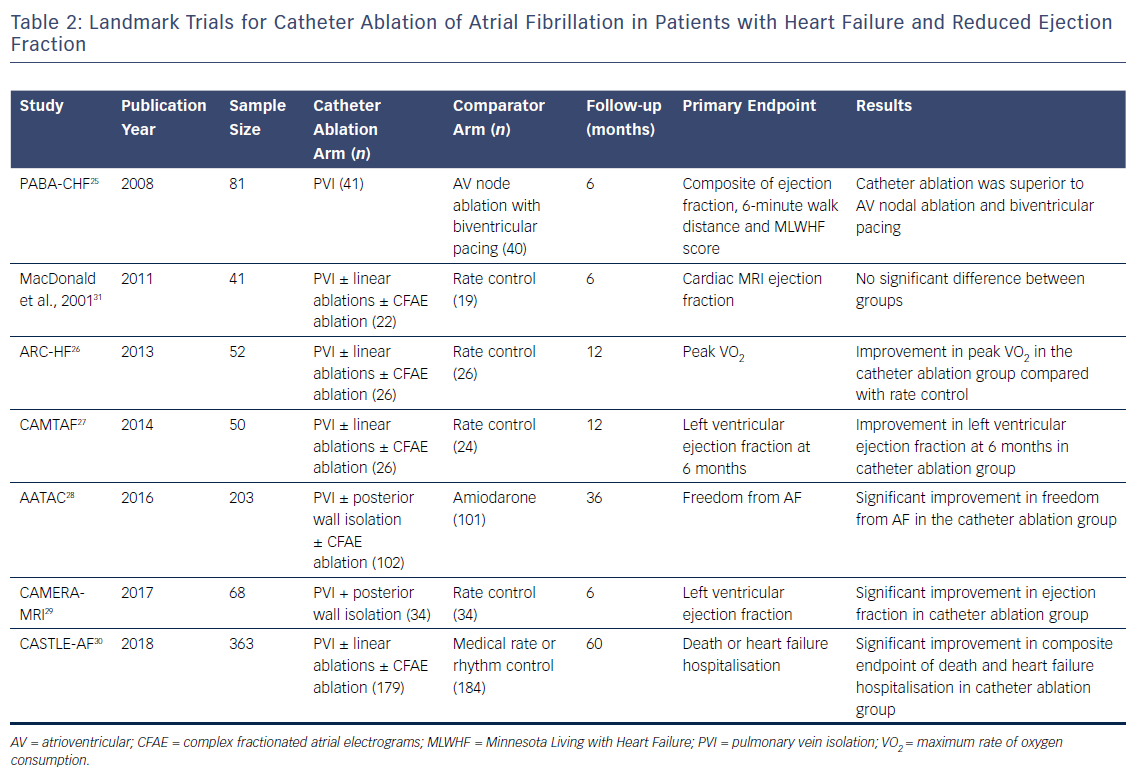 In the Ablation Versus Amiodarone for Treatment of Atrial Fibrillation in Patients with Congestive Heart Failure and an Implanted ICD/CRT Defibrillator (AATAC) trial, 203 patients with persistent AF and HFrEF (ejection fraction <40 %) and an ICD or CRT defibrillator were randomised to either catheter ablation (n=102) or amiodarone (n=101) for rhythm control.28 The primary endpoint of the study was freedom from AF or atrial flutter during the follow-up period of 2 years. The patients in the catheter ablation group had significantly higher rates of freedom from AF (70 %) compared with the amiodarone (34 %) group. The secondary endpoints of the AATAC trial were unplanned hospitalisation and death; the catheter ablation group showed significant improvement in both. The number needed to treat (NNT) to avoid one unplanned hospitalisation was 3.8 patients and NNT to avoid one death was 10 patients for catheter ablation versus amiodarone. Patients who underwent catheter ablation also had significantly higher improvements in their ejection fraction, 6-minute walk distance and MLWHF scores.

Catheter Ablation Versus Medical Rate Control in Atrial Fibrillation and Heart Failure: An MRI Guided Multicentre Randomised Controlled Trial (CAMERA-MRI) randomised 68 patients with persistent AF and idiopathic cardiomyopathy (ejection fraction <45 %) to receive either catheter ablation (n=34) or medical rate control (n=34).29 All patients received a cardiac MRI prior to randomisation. Patients in the catheter ablation arm had a significantly higher improvement in their left ventricular ejection fraction at 6 months. In patients who underwent catheter ablation, absence of left ventricular late gadolinium enhancement at baseline was a predictor for greater improvement in the ejection fraction at 6 months.

CASTLE-AF is distinct from previous randomised controlled trials as it is the first trial to include hard primary endpoints of death and worsening heart failure hospitalisation. It is also the largest study for catheter ablation in AF and HFrEF population and has the longest follow-up period (60 months), which included patients with both paroxysmal and persistent AF. Moreover, the comparison arm included both rate and rhythm control as the target strategy.

Some limitations of CASTLE-AF are prolonged enrolment period, lack of blinding with respect to randomisation and treatment. In addition, all patients in the study had an ICD or a CRT defibrillator, which may have affected the overall mortality.

Should Catheter Ablation be the First Line of Therapy?

The current American and European guidelines for management of patients with AF and HFrEF relied heavily on the DIAMOND-CHF and AF-CHF trials, which found no mortality benefit in pharmacological rhythm control over rate control. At the time of these publications, randomised controlled trials to assess the efficacy of catheter ablation were small and none had assessed mortality as a primary endpoint. The CASTLE-AF trial, on the other hand, evaluated the hard endpoints of death and heart failure hospitalisations and showed catheter ablation to be superior to conventional medical treatment of either rate or rhythm control. Given this information, the CASTLE-AF trial argues the current guidelines endorse catheter ablation as first-line therapy for the treatment of AF in patients with HFrEF regardless of AF type.