In this article, the authors discuss the differential diagnostic methods used in clinical practice to identify types of wide QRS tachycardias (QRS duration >120 ms). A correct diagnosis is critical to management, as misdiagnosis and the administration of drugs usually utilised for supraventricular tachycardia can be harmful for patients with ventricular tachycardia.

The term narrow QRS tachycardia indicates individuals with a QRS duration ≤120 ms, while wide QRS tachycardia refers to tachycardia with a QRS duration >120 ms.1 Narrow QRS complexes are due to rapid activation of the ventricles via the His–Purkinje system, suggesting that the origin of the arrhythmia is above or within the His bundle. However, early activation of the His bundle can also occur in high septal ventricular tachycardia (VT), resulting in relatively narrow QRS complexes of 110–140 ms.2 Wide QRS tachycardias can be VT, supraventricular tachycardia (SVT) conducting with bundle branch block (BBB) aberration, or over an accessory pathway, and account for 80%, 15% and 5% of cases, respectively.3 The correct diagnosis of VT is critical to management, as misdiagnosis and the administration of drugs usually utilised for SVT can be harmful for patients in VT.4

In this article, we discuss the differential diagnostic methods encountered in clinical practice. The text is mainly based on the recently published ESC guidelines on SVT.1

As a rule, the default diagnosis of a wide QRS tachycardia should be VT until proven otherwise. VT is defined as a tachycardia (rate >100 BPM) with three or more consecutive beats that originate in the ventricles.5,6 Differential diagnoses include (Table 1):7

If the QRS morphology is identical during sinus rhythm and tachycardia, then VT is unlikely. However, bundle branch re-entrant VTs and high septal VTs exiting close to the conduction system can have similar morphologies to sinus rhythm. The presence of a contralateral BBB pattern in sinus rhythm is more indicative of VT.

The presence of either atrioventricular dissociation or capture/fusion beats in the 12-lead ECG during tachycardia are key diagnostic features of VT (Table 2). Atrioventricular dissociation may be difficult to recognise because P waves are often hidden by wide QRS and T waves during a wide QRS tachycardia. P waves are usually more prominent in inferior leads and modified chest lead placement (Lewis lead).3 The relation between atrial and ventricular events is 1:1 or greater, i.e. more atrial than ventricular beats, in most SVTs. Atrioventricular nodal re-entrant tachycardia can be associated with 2:1 conduction, but this is rare.8 Although VA conduction can be found in up to 50% of patients with VT and a 1:1 relation is possible, most VTs have a relation of <1:1, i.e. more QRS complexes than P waves.

A QRS duration >140 ms with RBBB or >160 ms with left bundle branch block (LBBB) pattern suggests VT. These criteria are not helpful for differentiating VT from SVT in specific settings, such as pre-excited SVT or when class IC or class IA antiarrhythmic drugs are administered.9

Since VT circuits, especially post MI or in cardiomyopathies, frequently lie outside the normal His–Purkinje network, significant axis shifts are likely to occur that enable diagnosis. In SVT patients with aberrancy, the QRS axis is confined between −60° and +120°. Extreme axis deviation (from −90° to ±180°) is strongly indicative of VT in the presence of RBBB and LBBB.7

The presence of negative chest lead concordance (i.e. when all QRS complexes in leads V1–V6 are negative) is almost diagnostic of VT, with a specificity of >90%, but is only present in 20% of VTs (Figure 1). Positive concordance can be indicative of VT or an antidromic tachycardia utilising a left posterior or left lateral accessory pathway.10

In the V1 lead, typical RBBB aberrancy has a small initial r’, since in RBBB the high septum is activated primarily from the left septal bundle. This means that rSR’, rSr’ or rR’ patterns are evident in lead V1. However, in VT the activation wavefront progresses from the LV to the right precordial V1 lead in such a way that a prominent R wave (monophasic R, Rsr’, biphasic qR complex or broad R >40 ms) will more commonly be seen.11 Additionally, a double-peaked R wave (M pattern) in lead V1 favours VT if the left peak is taller than the right peak – the so-called ‘rabbit ear’ sign. A taller right rabbit ear characterises RBBB aberrancy but does not exclude VT.

In the V6 lead, a small amount of normal right ventricular voltage is directed away from V6. Since this is a small vector in RBBB aberrancy, the R:S ratio is >1. In VT, all of the right and some of the left ventricular voltage is directed away from V6, leading to an R:S ratio <1 (rS and QS patterns). An RBBB morphology with an R:S ratio <1 in V6 is seen rarely in SVT with aberrancy, mainly when the patient has a left axis deviation during sinus rhythm. 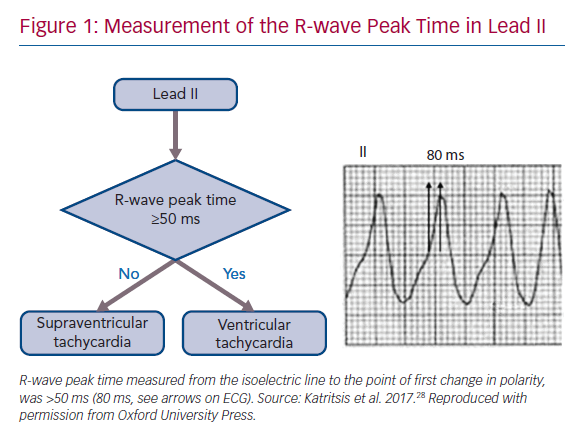 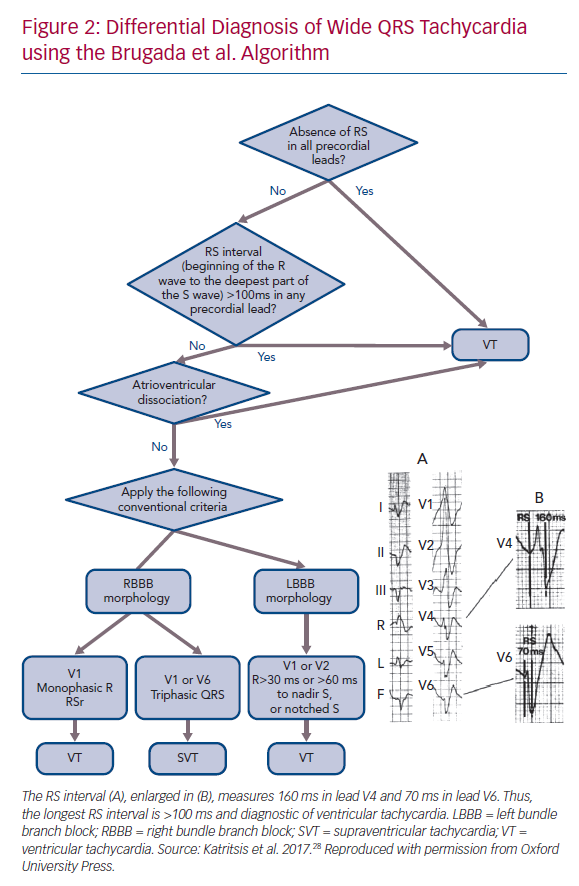 Differentiating fascicular VT from SVT with bifascicular block (RBBB and left anterior hemiblock) is very challenging. Features that indicate SVT in this context include QRS >140 ms, r’ in V1, overall negative QRS in aVR and R/S ratio >1 in V6.

In the V1 lead, the presence of broad R wave, slurred or notched downstroke of the S wave and delayed nadir of the S wave are strong predictors of VT for the same reasons as stated for RBBB.11

In the V6 lead, no Q wave is present in the lateral precordial leads in true LBBB. The presence of any Q or QS wave in lead V6 favours VT, indicating that the activation wavefront is moving away from the left ventricular apical site.

A number of algorithms have been developed to differentiate VT from SVT.12–14 The most established are the Brugada algorithm and the Vereckei algorithm, which utilises a single aVR lead.12,13,15

RS Interval in the Precordial Leads

The absence of RS complex in the precordial leads, i.e. only R and S complexes are seen on ECG, is only found in VTs (Figure 2). An RS complex is found in all SVTs and in 74% of VTs. No SVT with aberrant conduction has an interval >100 ms between the onset of the R wave and the deepest part of the S wave at its longest duration, irrespective of the morphology of the tachycardia.15 About half of VTs have an RS interval ≤100 ms and the other half have an RS interval >100 ms. The Brugada et al. algorithm has a sensitivity and specificity of 98.7% and 96.5%, respectively.12 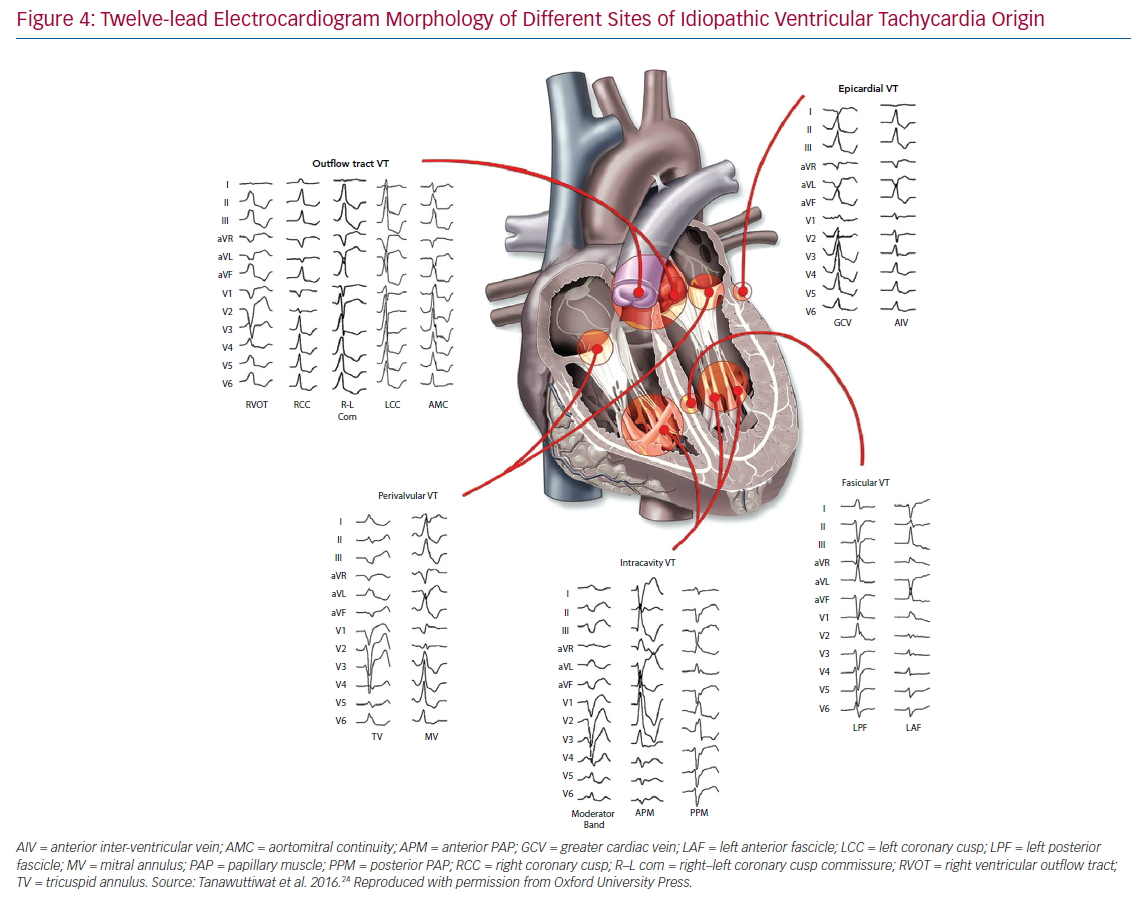 QRS Complex in the aVR Lead

During sinus rhythm and SVT, the wavefront of depolarisation moves away from the aVR lead, yielding a negative QRS complex in the aVR lead with few exceptions, e.g. inferior myocardial infarction. In contrast, the presence of an initial R wave (Rs complex) in the aVR lead suggests VT (Figure 3). The Vereckei et al. algorithm has a 91.5% overall accuracy in the diagnosis of VT.13

This criterion has the potential advantage that lead II is easy to obtain and is almost always present on ECG rhythm strips recorded in different settings, e.g. ECG monitoring in emergency rooms and intensive care units. In lead II an R-wave peak time ≥50 ms, independent of whether the complex is positive or negative, has been reported to have a sensitivity of 93% and specificity of 99% for identifying VT (Figure 1), but these results were not verified in the first large external application of this criterion.10,16

All criteria have limitations. Several conditions, such as bundle branch re-entrant tachycardia, fascicular VT, VT with exit site close to the His–Purkinje system and wide-QRS tachycardia occurring during antiarrhythmic drug treatment, are difficult to diagnose using the morphological criteria mentioned. This is most pronounced in VT originating from septal sites, particularly Purkinje sites and the septal outflow tract regions.17 Left posterior fascicular VT, the most common form of idiopathic left ventricular VT, is frequently misdiagnosed as SVT with RBBB and left anterior hemiblock aberration.2

Several independent studies have found that various ECG-based methods have specificities of 40–80% and accuracies of ~75%.2,10,19–22 A similar diagnostic accuracy of ~75% would be achieved effortlessly by considering every wide QRS tachycardia to be a VT because only 25–30% are SVTs. Emerging approaches to integrate these algorithms to provide more accurate scoring systems are being evaluated.23 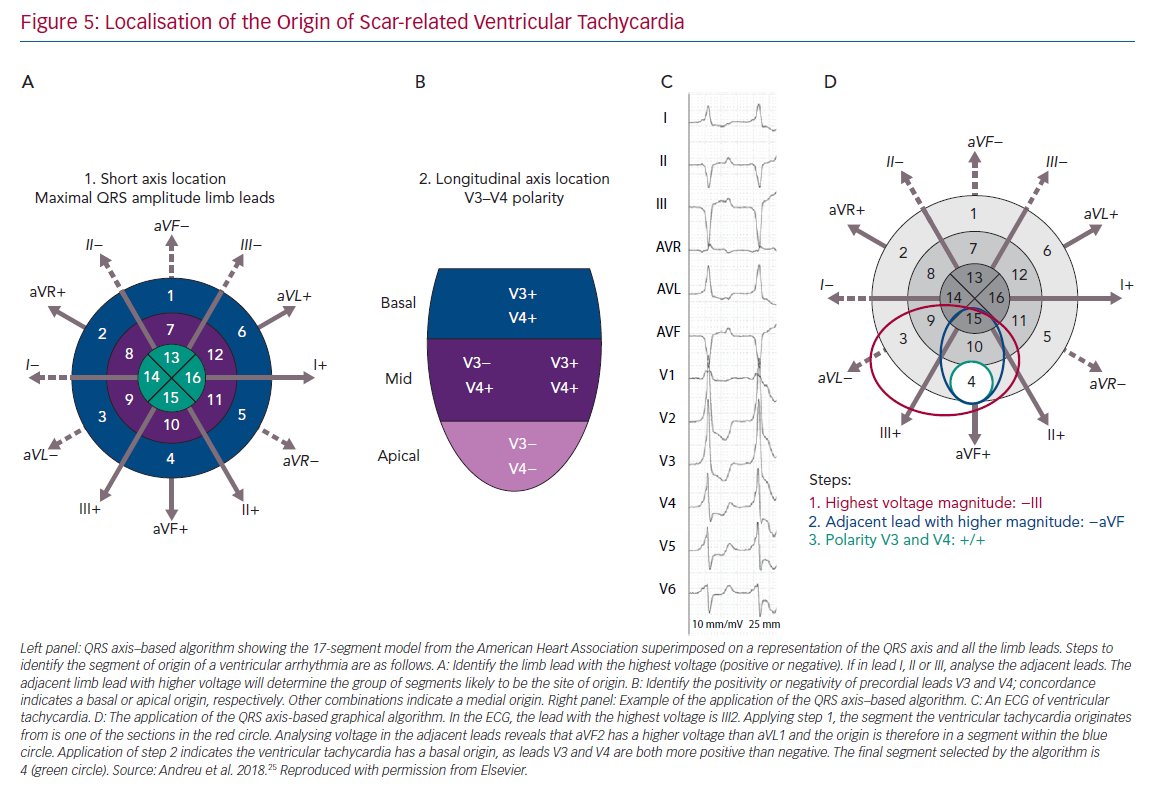 Figure 4 presents the ECG morphology of idiopathic ventricular tachycardia with different sites of origin24 and Figure 5 demonstrates localisation of the origin of scar-related VT.25

On certain occasions, such as tachycardias with borderline QRS duration and/or in the absence of atrioventricular dissociation, an electrophysiology study is necessary for diagnosis.26