With the widespread use of implantable cardioverter-defibrillators, an increasing number of patients present with ventricular tachycardia (VT). Large multicentre studies have shown that ablation of VT successfully reduces recurrent VT and this procedure is being performed by an increasing number of centres. However, for a number of reasons, many patients experience VT recurrence after ablation. One important reason for VT recurrence is the presence of an epicardial substrate involved in the VT circuit which is not affected by endocardial ablation. Epicardial access and ablation is now frequently performed either after failed endocardial VT ablation or as first-line treatment in selected patients. This review will focus on the available evidence for identifying VT of epicardial origin, and discuss in which patients an epicardial approach would be benefitial.

With an ageing population and widespread use of implantable cardioverter-defibrillators, physicians are confronted with an increasing number of patients with symptomatic, drug-refractory ventricular tachycardia (VT). Catheter ablation is an important treatment option in the management of patients with structural heart disease and VT.1,2 In many patients, VT can be successfully ablated from the endocardium of the left or right ventricle via a trans-venous, trans-septal or retrograde trans-arterial access. However, even in high-volume centres, VT ablation from the endocardium fails in over one third of patients.3–5 One important reason for this high failure rate is that VT origin may lie in the epicardium which is not affected by endocardial ablation with current techniques.1

In 1996, Sosa first described a technique to obtain percutaneous access to the pericardial space in three patients with chagasic cardiomyopathy.6 Epicardial ablation has since been incorporated into VT ablation strategies by many centres7–10 with its use increasing in recent years.4 The addition of epicardial mapping and ablation to the VT ablation strategy in patients with failed, previous endocardial ablation, increases success rate.7–10 Epicardial access can be obtained in most patients by experienced operators. Nevertheless, epicardial mapping and ablation has its risks and the complication rate is higher than an endocardial approach.11

Several clues can suggest whether important epicardial substrate will be present in a given patient, and these will be discussed in the following sections. Some of these clues, like the type of cardiomyopathy and 12-lead electrocardiogram (ECG) of VT, are available before a first procedure; while intra-procedural findings, like electrogram characteristics and results of endocardial mapping, may help to define the strategy of future procedures in case of failure. In some instances, epicardial access is contra-indicated or, conversely, the only available option to ablate VT; this will be discussed in the last section.

Several groups have investigated the value of the 12-lead ECG of VT or electrogram characteristics for prediction of epicardial VT origin (see Tables 1 and 2).

Berruezo et al. included patients with heart disease and VT with right bundle branch block morphology, and compared VT successfully ablated from the endocardium, with VT either successfully ablated from the epicardium or not successfully ablated from the endocardium.12 A pseudo-delta wave ≥34 ms, an intrinsicoid deflection time in V2 ≥85 ms and a shortest precordial RS complex duration ≥121 ms all suggested an epicardial origin of VT (see Tables 1 and 2). Later studies confirmed that these criteria are useful for distinguishing an epicardial origin for left ventricular VT, but sensitivity and specificity of the suggested cut off values were lower when applied to select areas of the left ventricle.13,14 Another study compared epicardial with endocardial paced beats and showed that these criteria did not apply to the right ventricle.15 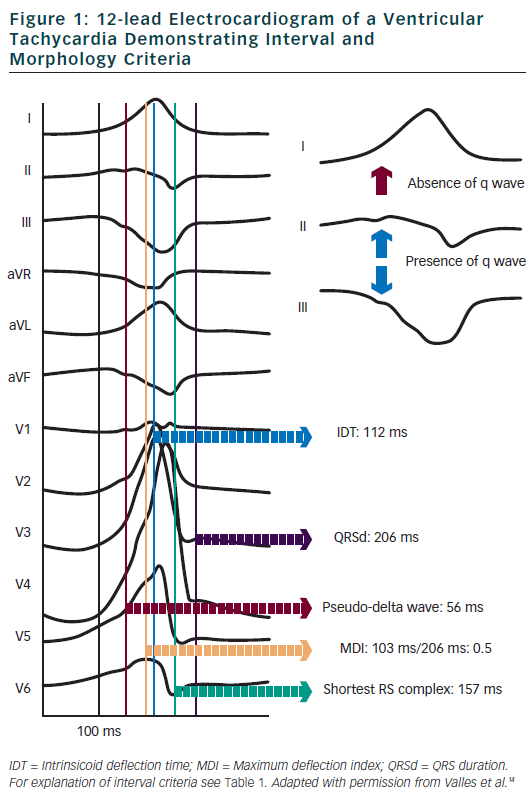 Daniels et al. reported on patients with idiopathic VT arising from the left epicardium, remote from the aortic sinus of Valsalva.6 Compared to the remaining patients with idiopathic VT, a maximum deflection index ≥0.55 identified patients with VT of epicardial origin (see Tables 1 and 2). Bazan et al. compared ECG features of paced beats at endocardial and epicardial right ventricular sites in a mixed population with and without structural heart disease.15 They found that a stimulus arising from the anterior right ventricular epicardium presents with a Q wave or QS complex in lead I and V2, respectively, and that a stimulus arising from the inferior right ventricular epicardium shows an initial Q wave in the inferior leads (see Table 2). In another study on 15 patients without prior myocardial infarction, the same group investigated QRS morphology during endocardial and epicardial left ventricular pace mapping and looked at QRS morphology of 19 epicardial VT.13 Site-specific morphology criteria that identified an epicardial origin were a Q wave in lead I for basal superior and apical superior sites, the absence of a Q wave in any of the inferior leads for basal superior sites, and a Q wave in inferior leads for basal inferior and apical inferior sites. Their proposed morphology criteria correctly identified epicardial origin in 84 % of VT (see Table 2). Vallès et al. tested most of the above-mentioned criteria in 14 patients with non-ischaemic cardiomyopathy, comparing endocardial and epicardial pace maps at basal superior to lateral sites in the left ventricle.14 They applied these criteria to VT mapped from the same region. Of all published criteria, the morphology criteria (presence of a Q wave in lead I and absence of Q waves in the inferior leads) were the most specific for both epicardial pace mapping and epicardial VT origin. The presence of a Q wave in lead I was also a very sensitive criterion (see Table 2). All interval criteria had modest specificity. They proposed a 4-step algorithm, including two morphology criteria and two interval criteria, with modified cut-offs. This algorithm, when applied to a validation cohort, had high specificity and sensitivity in determining epicardial versus endocardial VT origin in patients with non-ischaemic cardiomyopathy and VT from basal superior to lateral origin.14

In summary, although some ECG criteria suggest an epicardial VT origin, other factors significantly influence their validity; most importantly the type of cardiomyopathy and region of VT origin. These limitations have to be considered when applying the above-mentioned ECG criteria for assessment of VT origin. 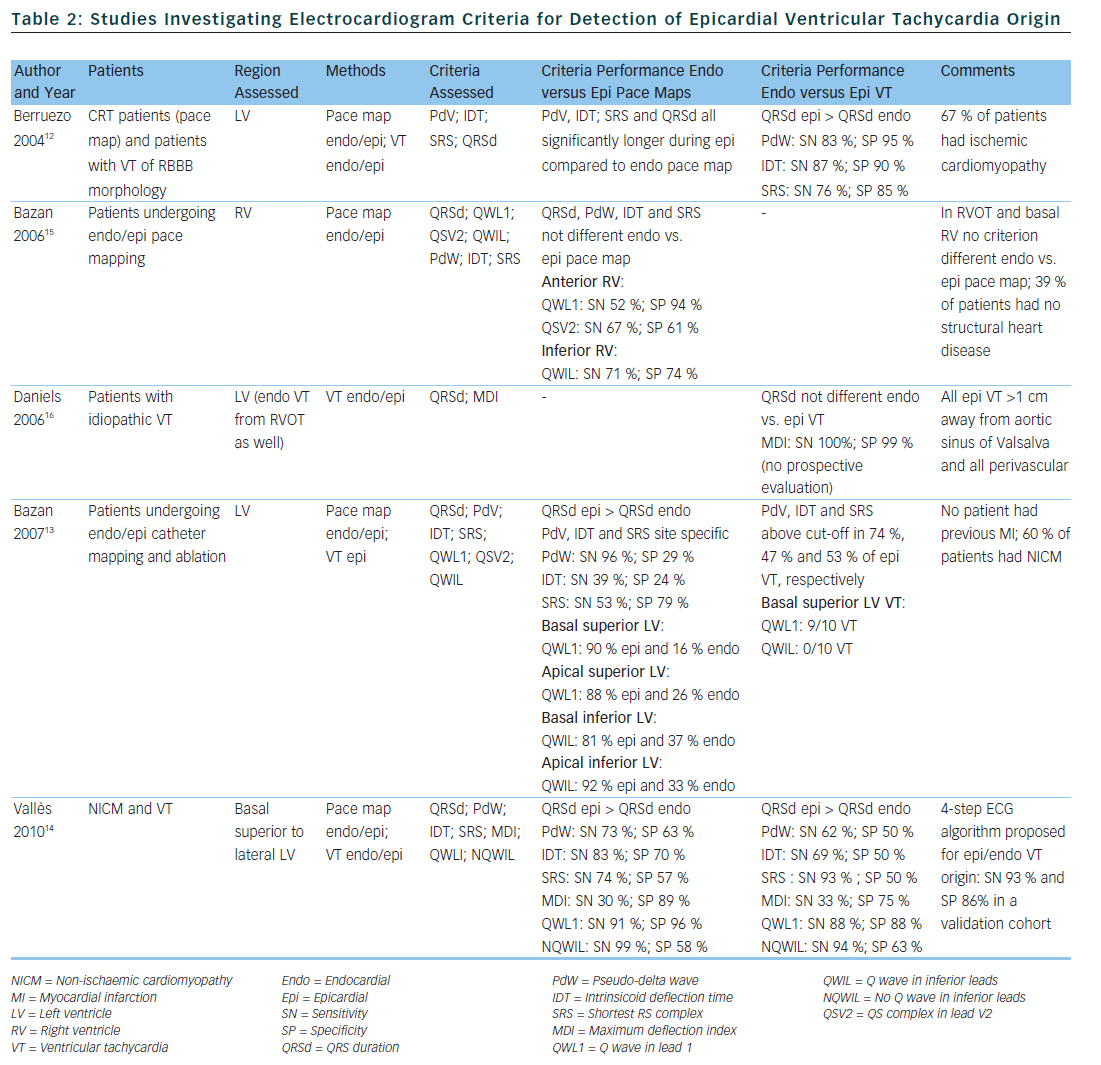 Epicardial Substrate According to the Type of Cardiomyopathy

Attempts at endocardial VT ablation in patients fulfilling taskforce criteria for ARVC/D were disappointing, with high recurrence rates despite multiple procedures irrespective of acute procedural success.21 In a study by Verma et al., arrhythmia-free outcome was somewhat improved with a substrate-based endocardial ablation strategy, but after years half the patient experienced arrhythmia recurrence despite continuing their anti-arrhythmic drug treatment.22

Because of the unique pathology of ARVC/D, epicardial scar plays a major role in VT origin; important parts of re-entry circuits may lie epicardially in this patient population.23,24 Therefore, if VT ablation is contemplated in ARVC/D patients, an epicardial approach may be considered during the first procedure, following ineffective endocardial ablation, or following arrhythmia recurrence after an initially successful endocardial ablation. As discussed above, the extent of the epicardial substrate in ARVC/D patients may be identified by endocardial unipolar mapping.18

The method of percutaneously accessing the pericardial space for epicardial VT ablation was first described in three patients with chagasic cardiomyopathy.6 Using combined endo- and epicardial access for VT ablation, the same group reported a high arrhythmia-free success rate.40 It was later demonstrated that patients with chagasic cardiomyopathy and VT have a two-fold greater epi- than endocardial scar area.41 Combined epi- and endocardial substrate ablation was very successful in reducing the number of recurrent arrhythmia in this study .

The first case series described results of ablation in eight patients with VT and sarcoidosis.48 In two patients, endocardial ablation failed to abolish VT; subsequent epicardial mapping showed an extensive epicardial substrate in one patient. Of note, four out of these eight patients ultimately required heart transplantation for recurrent VT. Another case series on nine patients with cardiac sarcoidosis reported one patient who underwent successful epicardial ablation after no endocardial substrate was found.49 Necropsy findings in patients with cardiac sarcoidosis show a predilection of granulomas to the sub-epicardium and interventricular septum.50

Large, multicentre studies on the outcome of endocardial VT ablation in patients with predominantly coronary heart disease consistently report an arrhythmia-free success rate of approximately 50 % and a significant reduction of the number of VT episodes in the remaining patients.3,5,51–53

Up to 14 % of outflow tract VT originate from the great cardiac vein and can be successfully ablated from within a cardiac vein or via a direct epicardial approach.60,61 Daniels et al. described ECG characteristics of idiopathic VT of epicardial origin, remote from the aortic sinus of Valsalva and compared them to idiopathic outflow tract VT.16 A myocardial deflection index ≥0.55 (MDI, see Table 1) was 100 %

sensitive and 98.7 % specific for an epicardial origin (see Table 2). Origin of VT was perivascular in all cases and ablation was successful in the majority, either through the coronary veins or via a direct epicardial approach. Another group described four patients with idiopathic epicardial VT originating from the crux of the heart.62 All patients had a MDI ≥0.55 and ablation was successful from the coronary veins in one and via a direct epicardial approach in two. According to another study, the MDI had limited value for discriminating endocardial from epicardial VT origin in sites adjacent to the left sinus of Valsalva like the distal great cardiac vein and anterior inter-ventricular cardiac vein.63 In patients with idiopathic VT a perivascular origin has to be considered and mapping and ablation from within the cardiac venous system is feasible and successful.

Other Considerations, Contraindications and Complications

In some instances, endocardial VT ablation is not possible because of left ventricular thrombus, mechanical valves in aortic and mitral positions, or severe peripheral artery disease that prohibits retrograde trans-arterial access. In such cases, epicardial ablation without simultaneous endocardial access is a possible alternative before considering surgical options.

Pericardial bleeding is the most frequent complication of pericardial puncture and can be present to some degree in up to 30 % of patients.1,11 Hepatic or intraabdominal bleeding may also occur after accidental puncture of the liver or a subdiaphragmatic vessel.68 Injury to the coronary arteries or the phrenic nerve by nearby ablation are other well recognised complications of epicardial ablation.11,68 It is important to remember that air in the pericardial space can increase the defibrillation threshold and should be evacuated before attempting defibrillation.69 Pericarditic symptoms have been reported in up to 29 % of patients after epicardial ablation and may manifest as major pericardial inflammatory reaction in some patients.11,68

Several clues may suggest the presence of epicardial substrate involved in a VT circuit and help with the decision to gain pericardial access. The most important factor is the type of cardiomyopathy. An epicardial substrate is frequently present in cases with ARVC/D or dilated cardiomyopathy. Electrocardiogram characteristics may have a role, but it is important to recognise their limitations. Both interval and morphology ECG criteria have been assessed for selected patient populations and morphology criteria also are site-specific. Electrogram characteristics and endocardial maps can provide additional evidence for the presence of epicardial substrate and should also be considered. Finally, pericardial adhesions may be present in patients with prior cardiac surgery or pericarditis and prohibit percutaneous pericardial access.