Pulmonary vein antrum isolation is the most effective rhythm control strategy in patients with paroxysmal AF. However, catheter ablation of non-paroxysmal AF has a lower success rate, even when persistent isolation of pulmonary veins (PVs) is achieved. As a result of arrhythmia-related electophysiological and structural changes in the atria, sites other than the PVs can harbour triggers. These non-PV triggers contribute to AF relapse. In this article, we summarise the rationale and current evidence supporting the arrhythmogenic role of non-PV triggers and our ablation approach to patients with non-paroxysmal AF.

AF is the most common sustained arrhythmia, and carries an increased risk of cardiovascular and cerebrovascular complications. The latest estimates on the prevalence of AF portray an alarming scenario, with a steep increase in the number of people developing AF and prediction that the number affected will more than double in the next 40 years.1 Among the strategies to restore and maintain sinus rhythm, AF ablation has emerged as an effective approach, with mounting evidence also supporting a role for ablation in patients with comorbidities and other concomitant cardiovascular disorders.2–5

Since the pivotal study by Haïssaguerre, et al. demonstrating the role of ectopic beats from the pulmonary veins (PVs) in initiating paroxysms of AF,6 PV isolation and, subsequently, PV antrum isolation (PVAI) have become the standard strategy in patients undergoing AF ablation. Although catheter ablation is the most effective rhythm control strategy in patients with paroxysmal AF, and PVAI is the mainstay of the procedure, patients with non-paroxysmal AF show a significantly lower success rate with PVAI alone, compared to those with paroxysmal AF.

Many ablation strategies have been proposed to achieve better outcomes in non-paroxysmal AF.7–10 Of these, adjuvant substrate modification (e.g. linear ablation and ablation of complex fractionated electrograms) has found a widespread use in clinical practice. However, in the randomised Substrate and Trigger Ablation for Reduction of Atrial Fibrillation II (STAR-AF II) trial,7 neither linear ablation nor ablation of complex fractionated electrograms in addition to PVAI was found to be superior to PVAI alone in patients with persistent AF.

From a pathophysiological standpoint, spontaneous firings from the PVs are frequently the only arrhythmogenic triggers involved in paroxysmal AF initiation. However, as arrhythmia persists, especially in patients with comorbidities and/or other cardiac and extra-cardiac diseases, the pathogenic role of PVs decreases and other atrial areas become involved in triggering AF. These non-PV triggers may arise from specific sites outside the PVs;the most frequent locations are the left atrial posterior wall (PW), left atrial appendage (LAA), crista terminalis, interatrial septum (IAS) and other thoracic veins, such as the coronary sinus (CS) and the superior vena cava (SVC).11–14

Even though no consensus has been reached on the ablation strategy to adopt in non-paroxysmal AF in order to improve long-term outcomes, several groups have reported higher arrhythmia-free survival rates in non-paroxysmal AF patients undergoing ablation of non-PV sites, either induced by a provoking pharmacological test and/or empirically targeted.7–10,15–19

Given the progressive nature of AF, electrical and structural changes affect the atria as a result of arrhythmia persistence. AF promotes electrical and structural remodelling, which increases atrial vulnerability to sustain atrial tachyarrhythmias. Persistence of AF determines atrial structural and functional derangement, as a result of extracellular matrix remodelling, cell-to-cell coupling abnormalities, and disorganised distribution of gap junction proteins (e.g. connexin-40 and -43). Additionally, myocyte density shows regional heterogeneities, which contribute to the development of areas of slow conduction and abnormal electrical properties.

Structural and electrical remodelling, fibrosis, and areas of slow conduction represent a perfect substrate for perpetuation of atrial tachyarrhythmia, but do not explain AF initiation, since there cannot be AF without a trigger inducing it. This paradigm has been the foundation of every AF ablation procedure. PV isolation has been the standard approach ever since triggers initiating AF were described in the late 1990s.6 However, when the changes in the atrial substrate occur, PVs become less likely to trigger AF and it is not uncommon to observe PVs electrically silent due to atrial remodelling and fibrosis in patients with a long history of AF who are undergoing their first catheter ablation. At the same time, other extra-pulmonary atrial sites with preserved rapid conduction may retain the ability to harbour ectopic beats triggering AF, owing to abnormal automaticity, triggered activity, or micro-re-entry. This mechanism has also been observed in dogs undergoing rapid pacing to elicit arrhythmia-induced atrial structural and functional changes.20 After several days of pacing, atrial cells display increased action potential durations, and delayed afterdepolarisation‐induced triggered activity of atrial tissue is responsible for the developmentof atrial tachyarrhythmias.

The viability of this concept has been confirmed by several clinical studies enrolling patients with persistent and long-standing persistent AF (LSPAF), in which ablation strategies targeting the atrial substrate (e.g. scar homogenisation, linear lesions and ablation of complex fractionated electrograms) did not show a significant benefit over PVAI alone.7,21,22 On the contrary, when ablation of extra-pulmonary triggers is performed in combination with PVAI, the outcomes significantly improve.13–17

Achieving permanent PV isolation is challenging and may require multiple procedures. The incidence of PV reconnection is very variable in studies and PV re-isolation in combination with elimination of detected non-PV triggers should be the strategy of choice in patients with recurrences.15,23–25 Of note, Prabhu et al. demonstrated that PV activity, specifically rapidity of PV firing and the presence of fibrillatory activity, does not predict catheter ablation outcomes in patients with persistent AF.24

To date, there is no standard definition for “significant” non-PV triggers or agreement on the protocol to adopt to induce them. As a result, their prevalence is widely variable in studies. Some investigators classify as significant only those non-PV triggers initiating reproducible sustained (>30s) atrial tachyarrhythmias, whereas others include those initiating runs of non-sustained (<30s) focal atrial tachycardia or leading to repetitive premature atrial contractions (PACs).15–17,19,22,26–28 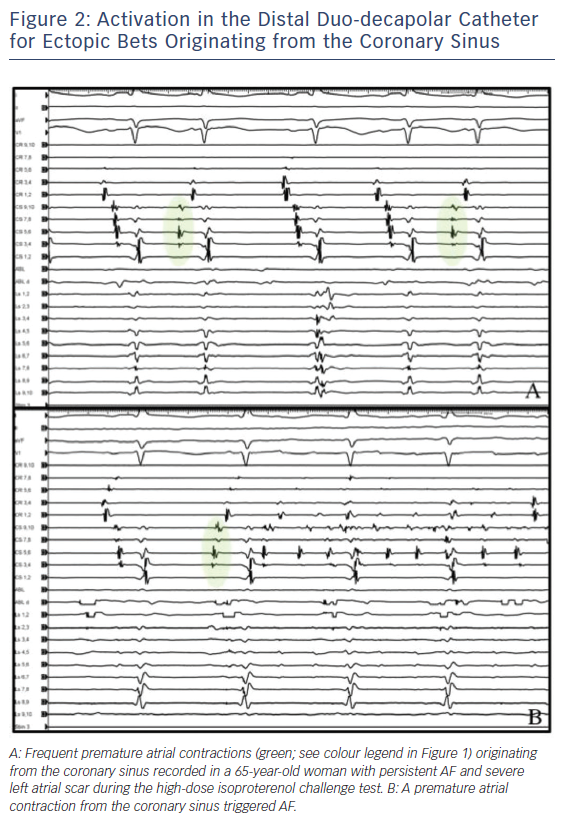 A lower prevalence of non-PV triggers has been reported in studies utilising low doses and/or an incremental infusion of isoproterenol, especially when AF ablation is performed under deep sedation or general anaesthesia. In this specific case, the likelihood to induce non-PV triggers is lower. A higher dose of isoproterenol appears to be necessary and even non-sustained focal atrial tachycardias and repetitive PACs should be considered significant and eventually targeted for ablation. Patients with non-paroxysmal AF tend to display a high prevalence of non-PV triggers, as well as specific sub-populations of patients, specifically female, elderly, obese individuals, and those suffering from sleep related breathing disorders such as heart failure, hypertrophic cardiomyopathy and valvular heart disease.

Among them, the likelihood of arrhythmia relapse due to non-PV triggers is higher; therefore, it appears reasonable to target those extra-pulmonary sites for ablation at the time of the first procedure.

Our Approach to Catheter Ablation of Non-paroxysmal AF

In our laboratory, all procedures are conducted under general anaesthesia. All anti-arrhythmic drugs are discontinued for at least five half-lives before the procedure, in order to reduce the likelihood of non-inducibility.

The standard ablation protocol includes empirical PV antra, left atrial PW, and SVC isolation. PW isolation includes the entire PW down to the CS and to the left side of the septum anterior to the right superior PV until electrical silence is achieved. Given the close proximity of the left atrial PW to the oesophagus, real-time temperature monitoring is performed by moving an oesophageal probe along the oesophagus in order to align the ablation electrode with the temperature probe. Power and contact force titration are also necessary, regardless of the location of the probe, as the real size and position of the oesophagus do not perfectly correspond to the probe’s position.

Subsequently, a pharmacological challenge test with high dose isoproterenol (starting at 20 µg/min and up to 30 µg/min for 10–15 minutes) is performed in sinus rhythm.

During the challenge test, catheters are positioned with the following set-up (Figure 1):

Localisation of non-PV triggers can be easily performed as follows:

If needed, a detailed activation mapping is performed to better localise the site of origin of non-PV triggers. Our definition for significant non-PV triggers includes those initiating AF, atrial flutter, sustained and non-sustained atrial tachycardia, as well as frequent PACs ≥10/min. The ablation strategy of choice is complete isolation when targeting triggers from the SVC, the LAA, and the CS, and focal ablation for other atrial structures (e.g. IAS, crista terminalis).

In our lab, SVC isolation is performed by targeting the septal segment of the SVC–right atrial junction, and continues posteriorly and inferiorly with ablation of sites of early activation until electrical isolation is achieved.28 This approach eliminates any risk of sinus node injury or SVC stenosis. Similarly, the chances of phrenic nerve injury are very limited and can be easily prevented by performing high-output pacing to localise the course of the nerve.

In some patients with factors predisposing to the development of non-PV triggers (female gender, sleep apnoea, obesity) or an arrhythmia history suggesting a higher prevalence of triggers (e.g. late recurrence post-PVAI), isolation of the LAA and the CS can be performed empirically, if triggers from these structures are not elicited during the isoproterenol challenge test.

Empirical isolation of LAA and CS is usually reserved for specific sub-populations of patients, specifically those with LSPAF whose PVs and PW have severe scarring at the time of the first procedure, and in all LSPAF patients at the time of redo-procedure in the eventuality that LAA and/or CS triggers are not disclosed by the isoproterenol challenge. As demonstrated in the Effect of Empirical Left Atrial Appendage Isolation on Long-term Procedure Outcome in Patients With Persistent or Longstanding Persistent Atrial Fibrillation Undergoing Catheter Ablation (BELIEF) randomised trial,empirical electrical isolation of the LAA at the time of the first procedure may significantly improve arrhythmia-free survival without increasing complications (unadjusted HR for recurrence with standard ablation without empirical LAA isolation: 1.92; 95 % CI [1.3–2.9]; p<0.001).17

In patients with persistent AF, we perform empirical CS isolation at the time of repeat procedure when PVs are persistently isolated and no other non-PV triggers are detected. In the same cohort of patients, empirical LAA isolation is performed on a case-by-case basis, owing to the need for long-term oral anticoagulation if isolation-induced mechanical dysfunction of the LAA is confirmed by transoesophageal echocardiogram. SVC is isolated in all patients, either empirically or because triggers from this structure are detected.

Although PVAI is the mainstay of each AF ablation, mounting evidence has demonstrated a pivotal role of non-PV triggers in early and late atrial tachyarrhythmia relapse and progression.

Patients with non-paroxysmal AF display a higher prevalence of triggers from sites other than the PVs and targeting these arrhythmogenic foci is of utmost importance to achieve better long-term outcomes. Their localisation can be easily achieved by means of multi-electrode catheters positioned in specific areas of the right and left atrium during the pharmacological challenge test. Moreover, empirical non-PV trigger ablation may further improve long-term freedom from atrial arrhythmias in selected cohorts of AF patients.