Premature ventricular contractions (PVCs) are very common and usually do not require treatment. However, in the clinical setting of troublesome symptoms, or when PVCs trigger polymorphic ventricular tachycardia or cause cardiomyopathy, proper treatment is critical. In this review, the clinical syndrome of PVC-induced cardiomyopathy, including risk factors for development and treatment, is discussed. Although PVC-induced cardiomyopathy is typically associated with frequent PVCs there are also patients with this burden that do not develop cardiomyopathy, suggesting a differential susceptibility. Treatment often consists of catheter ablation, although antiarrhythmic medications may also provide both reduction in PVC frequency and resolution of left ventricular dysfunction.

Premature ventricular contractions (PVCs) are very common cardiac arrhythmias, detected on up to 75 % of Holter monitors of ambulatory patients.1 Although PVCs in the setting of advanced structural heart disease have independent negative prognostic implications,2 the majority of PVCs are quite benign, associated with neither symptoms nor signals of future harm. For an important minority, PVCs represent an important medical condition that requires treatment. The three indications for treatment are symptom control, to prevent recurrence in PVC-triggered ventricular fibrillation and to potentially reduce the effects of PVC-induced cardiomyopathy. Anecdotally, there is considerable confusion regarding the application of therapy in general and catheter ablation specifically in all three of these indications. The tendency of general cardiologists seems to be undertreatment (after coronary heart disease is excluded) and the tendency of electrophysiologists may be overtreatment, particularly regarding the potential development of PVC-induced cardiomyopathy. The purpose of this review is to discuss what is understood about this syndrome, its prognosis and how catheter ablation may alter its natural history. It must be stressed that much of what follows represents my point of view, as observational studies supply most of the available data.

The concept of PVC-induced cardiomyopathy was first proposed by Duffee and coworkers, who observed a small group of patients with cardiomyopathy recover normal left ventricular (LV) function after pharmacological suppression of frequent PVCs.3 The salient features of how we think of this diagnosis may be summarised as follows: (1) LV dilatation and reduction in systolic function, either in the absence of pre-existing cardiac pathology or a recognised further reduction in LV function in the setting of pre-existing heart failure; in association with (2) frequent PVCs and (3) full or partial resolution of LV dysfunction with successful treatment of PVCs.4

As in most things in medicine, the details of all of these qualifiers are important. An early description of the potential effect of catheter ablation on PVC-induced cardiomyopathy by Yarlagadda et al. seems prescient.5 From a group of 27 patients referred for ablation of right ventricular outflow tract PVCs, eight had depressed LV function. Although the mean PVC burden in this study was >17,000/24 h, two of the eight with depressed LV function had <6,000/24 h. Seven of the eight had successful ablation and LV function normalised in all seven. Importantly, the authors proposed that this small experience supported a differential susceptibility between patients to develop cardiomyopathy, as a clear dose response could not be established.

Subsequent investigations have focused on distinguishing risk factors for the development of cardiomyopathy in patients with PVCs. This line of reasoning has been important, both to identify clinical risks and to try to “back calculate” something about the underlying mechanism. Mixed (but mostly negative) results have been observed with studies of PVC site of origin. If these studies pointed to site dependence, there would be considerable support for PVCs causing cardiomyopathy through production of dyssynchrony, analogous to the situation with right ventricular pacing. PVC morphology,6 PVC QRS duration7 and interpolation8 have been associated with PVC-induced cardiomyopathy in single-centre studies. However, most of the investigation has focused on PVC burden in observational studies of patients referred for ablation.7,9–13 A large and influential experience was presented by Baman and coworkers, who reported on 174 consecutive patients referred for PVC ablation, 54 of whom had depressed LV function.10 Patients with depressed LV function (mean ejection fraction 37 %) had significantly more PVCs than the group as a whole (33 ± 13 versus 13 ± 12 %); no patient in the low EF group had a burden less than 10 %. In an analysis of PVC frequency and ejection fraction (Figure 1), a “line in the sand” of 24 % PVC burden best separated those with LV dysfunction from normal (sensitivity 79 %, specificity 78 %). The authors concluded that although PVC-related cardiomyopathy may occur in patients with less PVCs, “in the presence of a PVC burden ≥24 %, it may be prudent to suppress the PVCs by catheter ablation or drug therapy to avoid the development of cardiomyopathy.” 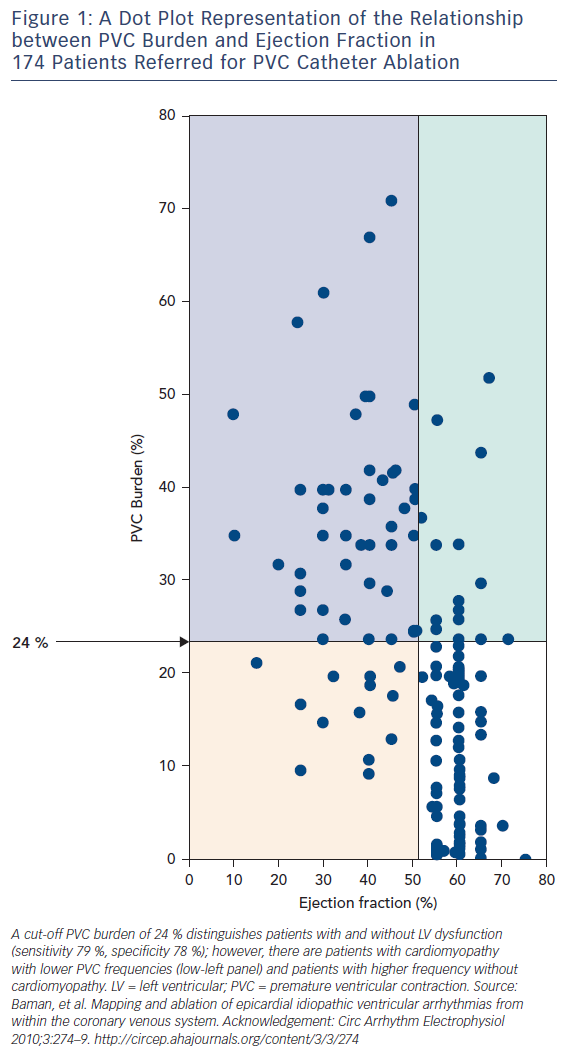 In my opinion, this statement has led to unfortunate, unintended consequences. In addition to the inherent bias in referral populations (patients referred for catheter ablation would be expected to have an enriched frequency of LV dysfunction), the figure has been misinterpreted. There are certainly patients (the upper right corner of Figure 1) who have a high PVC burden and normal ejection fraction. There is limited data in unselected populations about the time-dependent impact of frequent PVCs. The best data is from Niwano et al., who followed 249 patients (189 with complete follow-up data) with frequent (>1,000/24 h) PVCs from the right or left ventricular outflow tract and no discernable structural heart disease for a mean of 5.6 ± 1.7 years in the absence of treatment (except beta blockers as required for relief of symptoms).14 They segregated groups of high (>20,000), moderate (5,000–20,000) and less frequent (1,000–5,000/24 h) PVCs. Over follow up, 13 patients developed LV dysfunction, defined in this study as an absolute drop in ejection fraction of >6 % (the level of resolution by echocardiography, in their opinion). However, although it is difficult to completely determine from the manuscript, it seems that only one patient developed an ejection fraction <50 %. Although anecdotal, this is in keeping with my clinical practice supplemented by conversations with many electrophysiologists – it is unusual but certainly possible to develop PVC-induced cardiomyopathy over time. Most patients are discovered at presentation, which may be a considerable but indeterminable time from PVC onset as most patients with cardiomyopathy have no specific symptoms from their PVCs. This is an expression of differential susceptibility: subjects that are susceptible develop the problem at presentation, those that are not seldom do during follow up. Guideline statements reflect this observation, and recommend conservative management and follow-up imaging for patients with frequent PVCs and preserved LV function.15 If patients develop LV dysfunction during follow up (increased LV dimension is probably more sensitive than decreased ejection fraction), then treatment with ablation medications is certainly warranted. Nonetheless, many electrophysiologists are performing PVC ablation in asymptomatic patients with normal LV function, feeling justified by high PVC burden. This is at best unproven, at worse potentially hazardous.

Frequent PVCs may also exacerbate a pre-existing cardiomyopathy. Many physicians struggle with causation – are the PVCs caused by the myopathy or the other way around? Although these decisions can be subtle, they are usually assisted by assessing the PVC morphology. The vast majority of PVCs are from the outflow tracts, which is an unusual location for ischemic or non-ischemic pathology (excepting arrhythmogenic right ventricular cardiomyopathy). The presence of idiopathic-appearing frequent PVCs, particularly with a singular morphology, should suggest the possibility of contribution to LV dysfunction. Mountantonakis and colleagues studied 69 patients with frequent outflow tract PVCs and LV dysfunction referred for catheter ablation (ejection fraction 35 ± 9 %, ischemic heart disease excluded in all subjects).11 Twenty of these patients had a pre-existing diagnosis of non-ischemic cardiomyopathy. With successful catheter ablation, these patients also improved LV ejection fraction, but not to the same degree as those with only PVC-related cardiomyopathy (Δ LV ejection fraction 8 versus 13 %, p=0.046). In addition, lower baseline LV ejection fraction predicted a less dramatic response. Deyell et al. assessed predictors of LV recovery in 110 patients with frequent PVCs referred for ablation, 48 of whom had depressed LV function pre-procedure.7 They observed a gradient of PVC QRS duration between patients with normal LV function (134.7 ± 12.3 ms), PVC cardiomyopathy patients who recovered normal LV function (158.2 ± 8.6 ms) and those who did not (173.2 ± 12.9 ms). On multivariate analysis, the only predictor of failure to recover despite successful ablation was PVC QRS duration. The authors suggested that increases in PVC QRS duration may announce development of underlying fibrosis, which may account for the lack of reversibility. This further suggests that imaging may define possible candidates for intervention in the near future. Other groups have also found that PVC QRS duration is broader in patients with PVC-induced cardiomyopathy, suggesting a duration of ≥150 ms as a predictive indicator.16,17

Although very limited data exist to guide treatment, catheter ablation is highly effective (particularly for outflow-tract PVCs) and complications are unusual. One randomised trial in patients with outflow tract PVCs (without PVC-induced cardiomyopathy) demonstrated ablation to be superior in efficacy to metoprolol or propafenone.18 The recent ventricular arrhythmia guideline document recommends catheter ablation in patients with PVC-induced cardiomyopathy “for whom antiarrhythmic medications are ineffective, not tolerated, or not the patient’s preference.”15 Very limited data exist for antiarrhythmic drug treatment of PVC-induced cardiomyopathy. Although primarily a heart failure trial, in a randomised, placebo controlled study of 674 patients with heart failure (LV ejection fraction <40 %) and >10 PVCs/h, amiodarone therapy was associated with an increase in LV ejection fraction of 42 % at 2 years without an effect on mortality.19 Hyman and colleagues identified 20 patients with PVC-induced cardiomyopathy who were treated with flecainide or propafenone.20 Most patients had failed catheter ablation attempts, and coronary artery disease was excluded, but seven patients had some degree of fibrosis on MRI (<5 % of total LV mass). Treatment with flecainide or propafenone decreased mean PVC burden from 36.2 ± 3.5 to 10.0 ± 2.4 % (p<0.001) with a resultant increase in mean LV ejection fraction from 37.4 ± 2.0 to 49.0 ± 1.9 % (p<0.001).

In summary, PVC-mediated cardiomyopathy requires a high index of suspicion to identify based on the presence of cardiomyopathy plus PVCs, rather than frequent PVCs in isolation. Typical patients have a high burden of PVCs with a single morphology usually from the right or left outflow tract and no history of previous structural heart disease. Successful treatment, particularly when provided relatively early in the disease process, allows recovery of LV dysfunction.