Over the past few decades, significant progress has been made in understanding the mechanistic basis of atrial fibrillation (AF). One of the most important discoveries in this context has been that pulmonary veins (PV) play a prominent role in the pathogenesis of AF. PV isolation has since become the most widely used technique for treatment of paroxysmal AF. Multiple studies have demonstrated that the electrophysiological and anatomical characteristics of PVs create a proarrhythmogenic substrate. The following review discusses the mechanistic links between PVs and AF.

Atrial fibrillation (AF) is the most commonly encountered arrhythmia in clinical practice. The discovery that pulmonary veins (PV) play a prominent role in the pathogenesis of AF has revolutionised the management of AF. PV isolation has become the most widely used technique for treatment of paroxysmal AF. Since the initial discovery implicating PVs in AF pathogenesis, the mechanistic link between PVs and AF has been the subject of intense interest. The aim of this review is to provide an overview of the evidence linking PVs with the pathogenesis of AF.

Nearly a century ago, researchers postulated that focal atrial triggers play an important role in the genesis of AF.1 The first theories suggested that these triggers are distributed throughout the atria. In the ensuing years, multiple different theories emerged regarding AF maintenance. The circus movement theory proposed that a single rapid reentrant circuit drives AF.1–3 In the 1960s Moe et al. proposed the ´multiple wavelet´ hypothesis which postulates that AF is maintained by numerous reentrant wavelets that constantly meander through the atrium.4 A competing theory regarding AF maintenance focussed on the role of multiple high-frequency rotors as major drivers of AF.3

One of the most important discoveries regarding the mechanisms of AF came from studies by Jais et al. and Haissaguerre et al. in the late 1990s.5,6 They reported that in a subset of patients with paroxysmal AF, catheter ablation of focal triggers originating from the PVs effectively treated the arrhythmia. Their findings demonstrated that the PVs play an important role, both as triggers and drivers of AF (see Figure 1). Hence, after close to a century of research, the role of focal triggers in AF once again gained prominence.

The left atrial musculature extends from the atrium and envelopes the proximal PVs. The length of the PV sleeves varies between
13 mm and 25 mm.7 PV morphology has been reported to influence arrhythmogenesis. The superior veins, which have longer muscular sleeves,7 have been reported to be more arrhythmogenic than the inferior veins.5 In autopsy studies the PV myocardium has been reported to be more hypertrophied and discontinuous in AF patients.8 However the presence of hypertrophy and discontinuity has not been a consistent finding in all studies.9,10

A number of studies have reported the presence of ectopic pacemaker tissue within the PV myocardium. Blom et al. demonstrated that in human embryos, the myocardium around the PVs transiently stains for HNK-1, an antigen that is specific to the cardiac conduction system.15 In transgenic mice, Jongbloed et al. identified cells expressing antigens specific to the atrioventricular conduction system (CCS LacZ) at the PV orifice.16 Nguyen et al. performed biopsies of tissue from the PV–left atrial junction in AF patents and identified cells that were positive for the HCN4 channel, which underlies the pacemaker current.17 In PVs from explanted human hearts, Morel et al. found Cajal cells with positive immunostaining for HCN4.18 Cajal cells have previously been found to be able to depolarise spontaneously and act as pacemakers in smooth muscle cells.19 On the basis of these observations, it has been speculated that the PVs harbour cells with pacemaking function. 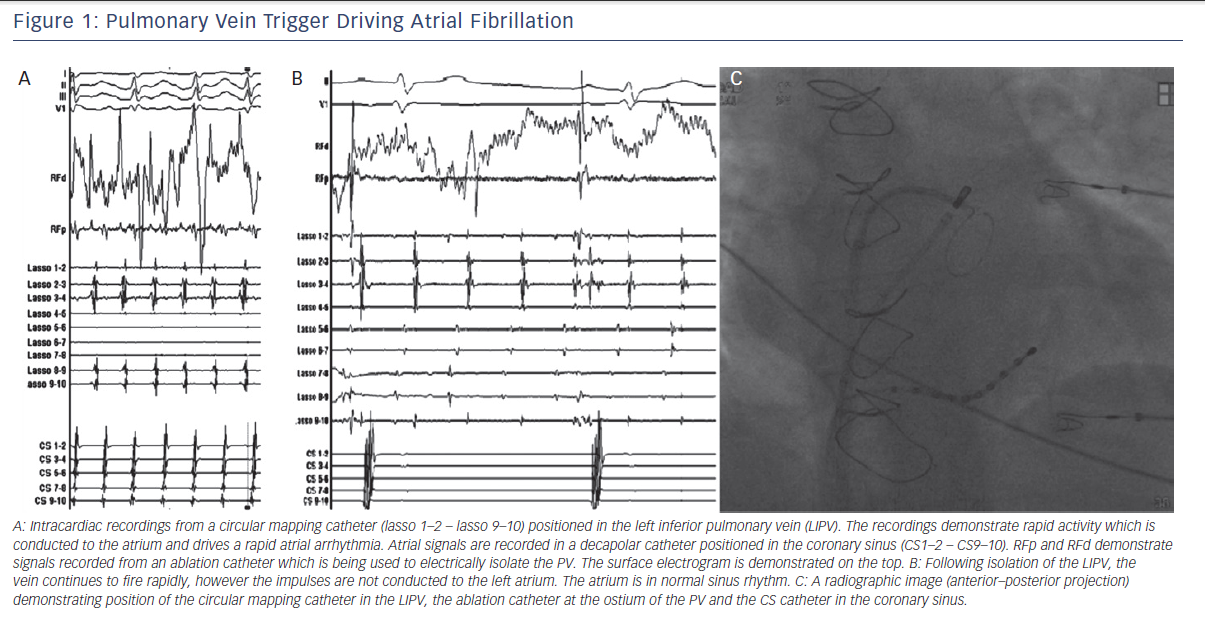 Interestingly, findings from a study by Morel et al. suggested that patients with AF may have a higher density of Cajal cells in PVs.18

Ultrastructural imaging studies have also identified pacemaker-like cells in PVs. Masani et al. used electron microscopy to demonstrate that interspersed between normal atrial myocytes, the PVs harbour clear cells with ultrastructural characteristics that closely resemble sinus nodal cells. These cells were located in the intrapulmonary, preterminal portion of the PVs.20 Perez-Lugonez et al. reported that human explanted hearts harbour pale cells with morphological characteristics reminiscent of P cells, transition cells and Purkinje cells.21 While there were some potential technical limitations of the study, these findings were suggestive of the presence of conduction tissue in the walls of PVs.22 Gherghiceanu et al. performed electron microscopy and identified interstitial Cajal-like cells in the PV myocardium.23

It is important to note that, despite the studies outlined above, there exists some controversy regarding the existence of nodal cells in adult PVs. Hocini et al. performed histological analysis of canine PVs and did not identify any cells resembling conduction tissue. All the cells consistently demonstrated histological properties to atrial myocytes.24 Verheule et al. reported that in canine PVs, the morphology and distribution of connexins were the same as those observed elsewhere in the atrium.25 They did not observe significant ultrastructural changes between the PVs and the left atrium. These findings argue against the presence of specialised conduction tissue in the PV myocardium.

The genetic mechanisms linking PVs and AF are not well understood. However, potentially important findings have emerged from recent studies. The bulk of evidence relates to the PITX2 gene. PITX2 plays an important role during development of the pulmonary myocardium.26,27 Interestingly, genetic variants in proximity to PITX2 (4q25 locus) have demonstrated a consistent and robust association with AF in multiple population genetic studies.28,29 Functional studies in animal models have also linked altered expression of PITX2 with increased arrhythmia susceptibility. However these studies have not focused specifically on PVs.30,31 Further, risk variants at the PITX2 locus have been reported to predict AF recurrence in patients undergoing pulmonary vein isolation (PVI).32 In addition to PITX2, other transcription factor genes are involved in PV morphogenesis and could potentially play an important role AF susceptibility.33 However further research is necessary to determine whether these genes are relevant to PV-mediated arrhythmogenesis.

The cellular electrophysiological characteristics of PV myocytes have been reported to be distinct to those of atrial tissue. Ehrlich et al. reported that PVs have a shorter action potential duration and amplitude in addition to a lower upstroke velocity in comparison to the left atrium. In terms of the specific ionic currents underlying this observation, the inward rectifier current (IKs), the transient outward potassium (Ito) current and the L-type calcium current (ICaL) was reported to be lower. On the other hand, delayed rectifier current densities were greater in the PVs. In turn, the augmented delayed rectifier currents and the attenuated inward rectifier currents have been attributed to higher expression of ERG and KvLQT1 and downregulation of Kir2.3 expression in PVs compared with atrial myocytes. These channel subunits also demonstrate a distinct subcellular distribution in PV myocytes.34

The electrophysiological characteristics of PV myocytes have been reported to change in response to chronic rapid pacing. Chen et al. reported that in isolated canine myocytes, rapid atrial pacing results in a shortening of the action potential with a higher incidence of both early and late afterdepolarisations. Measurement of specific ionic currents demonstrated that the slow inward and transient outward currents were smaller, however the transient inward and pacemaker currents were larger.35 They also observed a higher incidence of spontaneous arrhythmias in PVs from chronically paced dogs.36

The action potential characteristics of PV myocytes have been reported to vary depending on location. Hocini et al. demonstrated that the action potential duration at the distal PV is shorter than that at the orifice.24 In contrast to the aforementioned studies by Chen et al., burst pacing did not result in early or late afterdepolarisations. 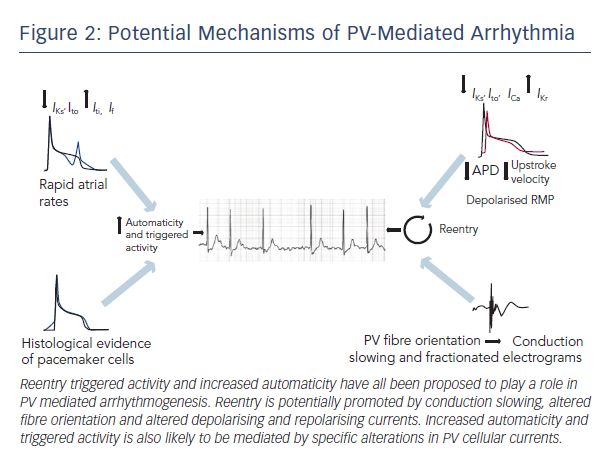 The basic mechanisms underlying PV arrhythmogenesis have yet to be fully characterised. It has been proposed that reentry, enhanced automaticity and triggered activity could all contribute to abnormal impulse generation. The potential mechanisms are discussed in more detail below (summarised in Figure 2).

Multiple studies have demonstrated that re-entry in the PV or at the PV–left atrial junction is a potentially important driver of AF. At a cellular level, as discussed above, in comparison with atrial myocytes, pulmonary venous cells have a shorter action potential duration, a slower upstroke velocity and a more depolarised resting membrane potential. These alterations in action potential characteristics are predicted to promote micro-reentry in the myocardial sleeves.37

Studies in animal models have demonstrated evidence of re-entry in PVs. In Langendorff-perfused dog hearts, Hocini et al. demonstrated complex arrangements of myocardial fibres with crossing over of parallel and diagonal fibres.24 There was evidence of slow and complex conduction over the PVs, which may be attributable to the fibre orientation. Regional conduction slowing is predicted
to create a substrate for PV reentry.

In canine left atrial preparations, Arora et al. demonstrated marked conduction slowing in the proximal PV relative to the distal vein. Atrial extrastimuli resulted in functional unidirectional conduction block and re-entry within the proximal PV.38 Chou et al. demonstrated that re-entry circuits induced by pacing clustered at the junction between the left atrium and the PVs.39 These regions of clustering of re-entry circuits corresponded with areas of abrupt change in myofibre orientation.

Atienza et al. demonstrated that administration of adenosine accelerated drivers and increased dominant frequency in both persistent and paroxysmal AF patients.41 In the subset of patients with paroxysmal AF, the highest dominant frequency was recorded at the junction between the PVs and the left atrium. Adenosine is predicted to augment the inward rectifier potassium current. Therefore, the observed increase in dominant frequency strongly supports a re-entrant mechanism at the junction between the PV and the left atrium as a major driver of AF.

Jais et al. reported that patients with AF display significant electrophysiological alterations when compared to those in sinus rhythm.43 Specifically, they demonstrated that in patients with AF, the ERPs were significantly shorter. They also demonstrated decremental conduction in the PVs. These changes are predicted to promote PV re-entry, which may drive AF.44

As discussed previously, morphological studies have identified pacemaker-like cells in the PVs. These findings suggest that automaticity and triggered activity is potentially an important driver of PV-mediated arrhythmogenesis. However the majority of the morphological studies have not characterised the electrophysiological characteristics of the node-like tissue. The electrophysiogical studies that have demonstrated direct evidence of abnormal automaticity and triggered activity in PVs are discussed in more detail here.

In an elegant series of experiments, Chen et el. investigated the action potential characteristics and ionic currents in canine PV myocytes. They demonstrated the presence of two distinct populations of PV myocytes: those with spontaneous pacemaker activity and those without. In response to rapid atrial pacing, the myocytes with pacemaker activity displayed faster beating rates in addition to a high incidence of early and delayed afterdepolarisations. Measurement of ionic currents demonstrated that these PVs have smaller slow inward and transient outward and larger transient inward and pacemaker currents.35 An attenuated IK1 current is predicted to enhance ectopic pacemaker activity.

The sodium current has also been implicated as an important mediator of enhanced automaticity in PV myocytes. Malecot et al. demonstrated that PVs have a higher basal permeability to sodium compared with left atrial myocytes. Pharmacological blockade of the INa current resulted in a decrease in the incidence of catecholaminergic automatic activity by reducing the slope of slow depolarisation.45

The PVs play a central role in the pathogenesis of AF. Significant progress has been made over the past two decades in understanding the basic mechanisms of PV arrhythmogenesis. Re-entry, automaticity or potentially a combination of mechanisms have been reported to underlie PV arrhythmogenicity. However the mechanisms of arrhythmia have not been fully elucidated. In the future, a more in-depth understanding of the science linking PVs and AF may result in the development of novel, more efficacious therapies.