With an ageing population globally, the burden of atrial fibrillation (AF) and its consequent complication of stroke and risk of mortality will continue to increase. Although opportunistic screening for AF by pulse check or ECG rhythm strip for people >65 years of age is currently recommended, data are now emerging that demonstrate the possible benefits of systematic community screening. Such screening is capable of identifying previously undiagnosed AF in 0.5–3.0 % of all those screened. The effectiveness of screening programmes will be markedly weakened by the lack of a structured downstream management pathway, making it a mandatory component in any AF screening programme for the general population. Different tools, especially smartphone-based devices, have made AF screening in the community more feasible. However, the sensitivities and positive predictive values of the current versions of automated diagnostic algorithms for AF have to be improved further to increase the cost-efficiency of screening programmes.

Atrial fibrillation (AF) is the most common sustained heart rhythm disorder1 and in a recently conducted community screening programme in Hong Kong the total burden of AF in the population was estimated to be 0.77 % in 2016. This is predicted to increase to 1.1 % in 2030 due to population ageing, see Figure 1.2 As in other developed countries and regions with ageing populations, AF has become an epidemic condition. Although the risk of stroke related to AF can be reduced by 64–70 % by oral anticoagulation,3 underutilisation of this effective treatment and delayed diagnosis remain major obstacles. Around a quarter of patients have silent or asymptomatic AF4 and up to 25 % of patients with AF-related stroke only have this arrhythmia diagnosed at the time of the stroke.4–6 Current European Society of Cardiology guidelines recommend opportunistic screening for AF by pulse taking or ECG rhythm strip instead of a systematic approach in people >65 years of age.3 In fact, in a randomised controlled study, systematic and opportunistic screening in a primary care setting in England detected similar numbers of new AF cases.7 This review article therefore discusses the current evidence for and obstacles to systematic community screening for AF.

AF satisfies most of the World Health Organization criteria for a disease suitable for screening, see Table 1.8 The European Society of Cardiology guidelines recommend opportunistic screening for AF, as outlined above, short term followed by continuous ECG monitoring for at least 72 hours in patients with transient ischaemic attack or ischaemic stroke, and regular interrogation of pacemakers and implantable cardioverter-defibrillators for atrial high-rate episodes (Class I recommendations).3 Additional ECG monitoring by long-term non-invasive ECG monitors or implantable loop recorders to document silent AF in stroke patients is a Class IIa indication. Lastly, systematic ECG screening to detect AF is only recommended as a Class IIb indication in those >75 years or who are at high stroke risk.

Screening for AF has recently been tested in different settings using different tools.9 Various models of systematic community-based AF screening programmes have been reported on.

Systematic AF Screening in the Community

Large-scale systematic AF screening in the community (>4,000 individuals) has been conducted in different countries and regions, see Table 2.

In the US Cardiovascular Health Study, a population-based longitudinal study of risk factors for coronary artery disease and stroke, a random sample of citizens from Medicare eligibility lists from four communities was recruited.10 A response rate of 57.6 % was achieved and 12-lead ECG was performed in 5,151 patients. AF was detected in 277 (5.4 %) of participants, with 77 (1.5 %) previously being undiagnosed.

The US Reasons for Geographic and Racial Differences in Stroke (REGARDS) study was designed to investigate the racial and regional disparities in stroke incidence.11 Individuals were recruited from a commercially available list of residents. Two groups of individuals known to have high stroke mortality rates, including black Americans and residents of the southeastern “stroke belt region”, were over-represented in the total study sample. By using a combination of mail and telephone contact, a 49 % participation rate was achieved. Of the total 29,861 participants, AF was revealed in 432 people by seven- or 12-lead ECG. Of these, 174 (0.58 %) were previously undiagnosed. 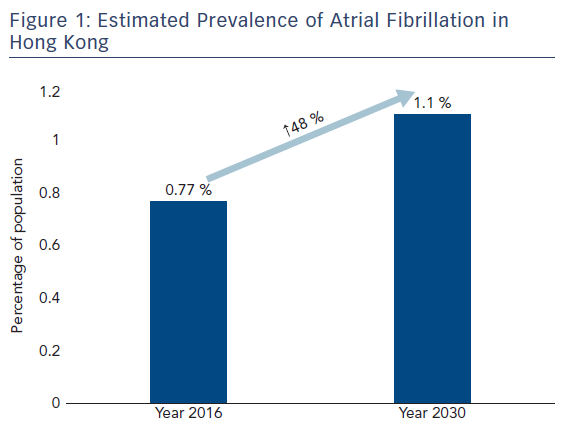 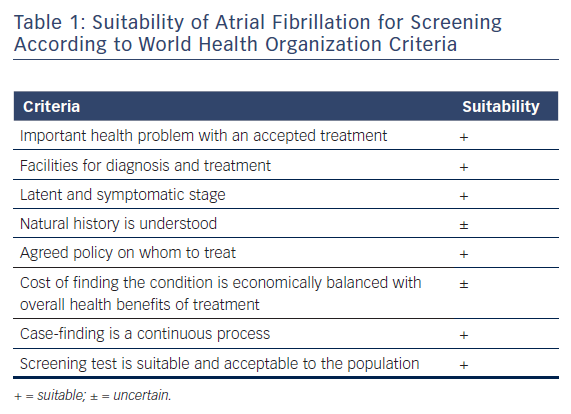 The population-based Gutenberg Health Study was performed to determine the incidence of cardiovascular morbidity and cardiovascular diseases such as AF and myocardial infarction.12 Persons aged between 35 and 74 from the city of Mainz and the region of Mainz-Bingen in Germany were selected at random via the registration office and invited to take part in a 5-hour examination. The response rate was 60.4 %. Of the 5,000 participants, 161 (3.2 %) already had AF, as detected by a 12-lead ECG and/or diagnosed by a physician. Twenty-five participants (0.5 %) were first diagnosed during the study.

The Irish Longitudinal Study on Ageing (TILDA) was a prospective cohort study of ageing comprised of community-dwelling citizens aged ≥50 years in the Republic of Ireland. The objectives of this study were to describe the social, economic and health status of older adults and determine the factors underlying healthy ageing.13 A nationally representative sample was drawn from a list of all residential addresses in the country. The response rate was 62 % and a total of 8,175 individuals were recruited. Of these, 4,890 underwent three-lead ECG recording. The prevalence of AF was 3 %. Forty-five (0.92 %) of those with ECG evidence of AF had not previously been diagnosed with the condition.

The on-going Systematic NT-proBNP and ECG Screening for Atrial Fibrillation Among 75-year-old Subjects in the Region of Stockholm, Sweden (STROKESTOP) study aimed to determine whether systematic screening for untreated AF in the community with the initiation of oral anticoagulation could cost-effectively reduce the risk of ischaemic stroke over 5 years of follow up.14 Computerised 1:1 randomisation was performed in the 75- to 76-year-old population, with stratification for sex, year of birth and region. Those residing in Stockholm Country or the Halland region were eligible to participate. Individuals were identified by their unique civic registration numbers. They were randomised to the screening or non-screening arm. An invitation was sent by mail to those in the screening arm and non-responders were sent one or two reminder letters. The response rate was 53.8 % and 7,173 individuals participated in screening. A single-lead ECG recorder (Zenicor, Zenicor Medical Systems) was used for AF screening. AF was newly diagnosed in 0.5 % in the screened population on the first ECG and in 3 % of the screened population with repeated ECGs performed twice daily for 2 weeks and on palpitations.

Chan et al. reported on a study to assess the feasibility of community screening for AF using smartphone ECG (AliveCor, AliveCor Inc.) and generate epidemiological data on AF prevalence and risk factors in Hong Kong.2 All citizens aged ≥18 years were eligible to participate. Of the 13,122 participants (mean age 64.7 years), AF was detected in 239 individuals (1.8 %). Of these, 101 (0.8 %) had newly diagnosed AF, with 66 (65.3 %) being asymptomatic. The mean CHA2DS2VASc score was 3.1 in patients with newly diagnosed AF and the number-needed-to-screen (NNS) for one case of newly diagnosed AF was 129.

Proietti et al. reported on data obtained from Belgian Heart Rhythm Week, which is a national campaign including an untargeted voluntary AF screening programme organised by the Belgian Heart Rhythm Association.15 AF was diagnosed with a 30-second one-lead ECG recording with a hand-held machine (HeartScan HCG-801, Omron Healthcare). Of a total 65,747 participants in 2010–14, 911 (1.4 %) had AF and 603 (0.92 %) were previously undiagnosed.

Chan et al. recently examined the effectiveness of the community-based AFinder programme.16 This programme was initiated by a panel of cardiologists, led by the Hong Kong Council of Social Services and carried out by a group of trained lay volunteers. Individuals aged ≥50 years were eligible to participate. Among the 10,735 individuals (mean age 78.6 years) screened with interpretable smartphone ECGs (AliveCor), 244 (2.3 %) had AF and 74 (0.69 %) had newly diagnosed AF. The mean CHA2DS2VASc score was 3.9 in the latter group, and the NNS for one newly diagnosed AF was 145. A nurse followed-up the AF patients at 9 months by telephone and assessed their health-seeking behaviour. Those with indications for oral anticoagulation were asked whether they were receiving this treatment and whether they were compliant with it. Of the 72 newly diagnosed patients in this group, only 47 (65 %) had sought medical attention and, more disappointingly, only 17 (24 %) had been prescribed oral anticoagulants. Once they were given oral anticoagulation, most of them (16, 94 %) reported 100 % compliance with therapy. Compared with the NNS of 145 for a newly-diagnosed case of AF, the NNS for one patient receiving appropriate oral anticoagulation for newly diagnosed AF increased 3.6-fold to 671. This underscores the importance of a more structured management pathway being embedded in any AF screening programme.

With the advent of mobile and other technologies, many new tools for screening AF in the community have become available. The AFinder programme used the Kardia mobile device (AliveCor), which produces a single-lead ECG.16 Compared to a reference diagnosis made following interpretation of the ECG by a cardiologist, the sensitivity and specificity of the automated algorithm in diagnosing AF were determined to be 75 % and 98.2 %, respectively. The positive and negative predictive values were 64.9 % and 99.5 %, respectively. It was concluded that the suboptimal sensitivity and positive predictive value of the current version of the algorithm makes doctors’ interpretation of smartphone ECGs essential. 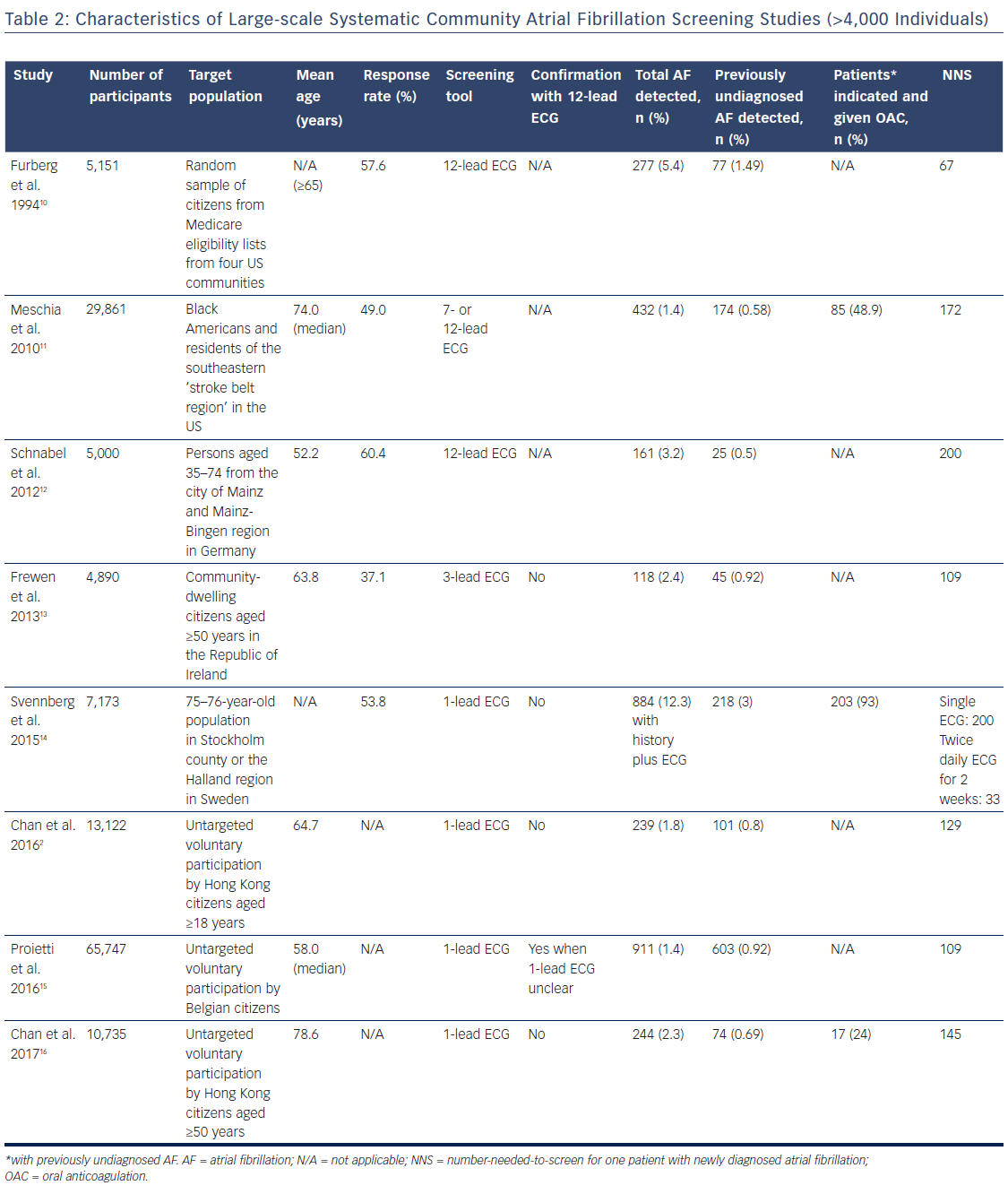 Despite increasing data on community-based AF screening becoming available in recent years, questions remain regarding the most appropriate setting and tools. Large and appropriately powered randomised outcome studies to answer these questions and confirm that such programmes can indeed reduce the burden of stroke and consequent mortality are eagerly awaited. At this juncture, a few obstacles and challenges have already been identified.

As shown by AFinder, the effectiveness of a community AF screening programme will be significantly weakened by lack of a management pathway.16 The NNS for one patient receiving appropriate oral anticoagulation for newly diagnosed AF was 671 in AFinder compared to 209 in the STROKESTOP study, when such individuals were offered structured follow-up by a cardiologist.14 A structured downstream management pathway should thus be a mandatory component of any community AF screening programme.

Mass AF screening of the general population has become more feasible with the availability of new tools, especially those capable of producing single-lead smartphone ECGs. The sensitivity and positive predictive value of the automated diagnostic algorithm of any ECG-producing tool, however, has to be high enough to save the intermediate step of interpretation by a doctor. Currently, the Cardiio Rhythm seems to provide the highest sensitivity, at 92.9 %.

Data on the cost-effectiveness of systematic community AF screening programmes are, unfortunately, scarce.14,19 Data are, however, essential for health resource allocation by governments. In the STROKESTOP study, screening with smartphone ECG was shown to be cost-effective using a lifelong decision-analytic Markov model.14

Last but not least, there remains room for improvement in the response rates observed in different systematic community screening programmes for AF. Regular large-scale community AF awareness programmes highlighting the condition’s potentially disabling and fatal complication of stroke should be implemented to enhance the response rate.