Catheter ablation has become an important modality in the treatment of most cardiac arrhythmias. In recent years there has been significant development of new ablation energies and technologies in an attempt to improve clinical outcomes and decrease disease burden. Ablation failure is often associated with inadequate lesion formation, and catheter-to-myocardial contact force (CF) and catheter stability are two of the parameters required to produce effective lesions during radiofrequency energy application. Recently, CF sensing catheters and tagging modules have been developed to give operators realtime data on catheter force and stability. This review describes the novel ThermoCool® SmartTouch® Catheter (Biosense Webster Inc., CA, US) and VisiTag™ Module (Biosense Webster Inc., CA, US) software, and discusses the results of several studies on CF and catheter stability during mapping and ablation of the left atrium and ventricle from our electrophysiology laboratory. We assess the short- and longer-term outcomes during mapping and ablation with and without CF data, as well as the use of the VisiTag Module™ software, which allows the evaluation of multiple parameters of lesion formation, then integrates and displays this as automatic tags in a relatively objective way.

The role of percutaneous catheter ablation for the treatment of cardiac arrhythmias has become paramount over the last 30 years. Although there has been a dramatic increase in the number of different ablation energies and technologies (such as cryoablation,1,2 laser balloon3,4 and high-intensity focused ultrasound,5,6 multi-electrode ablation catheters,7,8 robotic navigation,9,10 and focal impulse and rotor modulation11,12), radiofrequency (RF) energy continues to be the cornerstone of catheter ablation. Although the success rate for the ablation of most supraventricular tachycardias (SVTs) is acceptable,13,14 more complex arrhythmias such as atrial fibrillation (AF), atrial tachycardia (AT) and ventricular arrhythmias (VA) continue to have significant recurrence rates.15–18 This may be attributed to inadequate lesion formation or incomplete block during linear ablation.19 Therefore, effective lesion formation is important to decrease recurrence and the need for re-ablation.

Contact Force Technology on the Market
The TactiCath Quartz® (Endosense SA, Geneva, Switzerland) is a third generation standard open-irrigated 7 French (Fr), 3.5 mm ablation catheter that uses a fibre optic sensor, which detects realtime axial and lateral changes in CF without the need for pre-procedure calibration.26 This information is displayed both graphically and numerically during the procedure. In addition to the recognised force-time integral (FTI), a new algorithm, the lesions index parameter correlates lesion formation with RF power, ablation time and CF, and provides a realtime indication of lesion quality.

The Intellisense System uses the 8 Fr Artisan® robotic ablation catheters to measure CF. It provides visual and vibration feedback of force via the Instinctive Motion® Controller when incorporated into the Sensei® X Robotic Catheter Navigation System.9,10,29 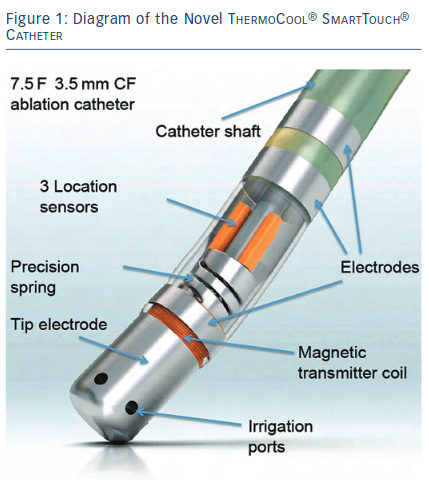 Download original
The ThermoCool® SmartTouch® Ablation Catheter and Contact Force Technology
The novel ThermoCool® SmartTouch® Catheter is a 7.5 Fr, 3.5 mm irrigated tip ablation catheter. The tip electrode is connected by a tiny precision spring to the catheter shaft, which allows a small amount of tip deflection and is also connected to a transmitter coil that emits a reference location signal (see Figure 1). The catheter tip-to-myocardial CF and direction of force are measured with a resolution of 1 g every 50 ms by three location sensors within the shaft, and the degree of spring bending via a magnetic transmitter at the catheter tip. This produces a CF reading averaged over one second. The catheter and information is then integrated into the Carto® 3 Mapping System and can be displayed to the operators. This allows precise tracking of the catheter tip. The catheter needs to be equilibrated to body temperature, and this is achieved by placing it within the blood pool for a minimum of 15 minutes.

The realtime CF that is displayed on the Carto® 3 Mapping System is updated every second. CF is also displayed on the system in other formats, such as a graphical representation seen as a force vector arrow at the catheter tip. User-defined value limits can be programmed, and operators can be graphically alerted to excessively high or low CF. All CF data, as well as data for impedance, power and temperature, in relation to the reconstructed electroanatomical map, are recorded and can be accessed offline. The CF information can also be integrated into the VisiTag™ Module software as one of the operator-defined parameters. 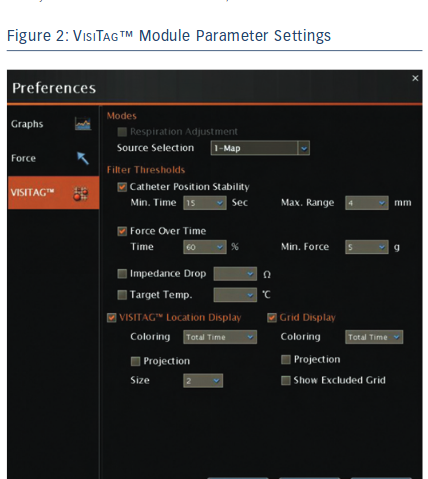 The tags are displayed in two methods: VisiTag™; grid cells; or a combination of both (see Figure 3). 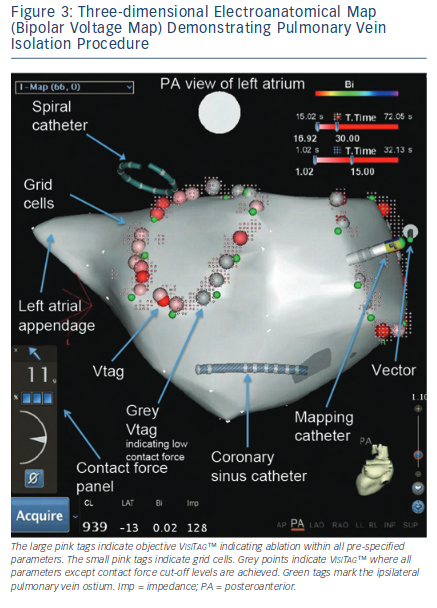 VisiTag™ are large 4 mm2 tags representing each ablation application meeting all user-defined criteria. Grid cells are small tags representing each 2 x 2 mm area that has received RF energy and displays the cumulative amount of RF application time spent in this area. They are coded using a colour gradient based on user-defined parameters, such as total time, average force and force-time interval. The tags are non-deletable and are therefore an objective recording of the RF applications. All data are recorded and can be accessed offline. The parameters can also be adjusted offline to display ablation tags when different value limits are used (see Figure 2). The additional benefit of the VisiTag™ Module compared with conventional ablation tagging is the quantitative assessment of parameters that influence lesion formation, which may improve clinical outcomes.

The Impact of Contact Force
Although CF data add another level of complexity to the information displayed on the Carto® 3 Mapping System, operators can quickly become familiar with this information. The addition of the VisiTag™ Module is also simply displayed to be operator-friendly. The fact that both new technologies have parameters that can be pre-defined and selectively displayed, assists to reduce the operator learning curve.

Our electrophysiology laboratory has performed a high volume of CF guided arrhythmia ablations to date. Our analysis of this technology includes several CF parameters.

Firstly, assessment of the relative CF obtained whilst mapping and ablating in the left atrium (LA) during pulmonary vein isolation (PVI) using a non-steerable SL1 sheath, and the correlation between CF and tissue impedance during LA mapping and ablation was performed.30In this study, 30 patients underwent PVI with CF data recorded, but not displayed to the operators. A total of 3,475 mapping points and 878 ablation points were analysed. Overall median CF during mapping was 14.0 g, and interestingly we consistently showed that the median CF obtained at the left atrial appendage (LAA) ridge and mitral isthmus was very low (5.1 g and 6.9 g, respectively), and that extremely high and potentially dangerous levels of CF >100 g occurred even when non-steerable sheaths were used. During ablation, median CFs were lower during ipsilateral circumferential PVI ablation around the left pulmonary veins, compared with the right (12.3 g and 22.8 g, respectively), and this was again predominantly due to the low CFs obtained at the LAA ridge. These results suggest a reason for pulmonary vein reconnection post circumferential PVI ablation, which has been shown in previous studies to occur most frequently at the LAA ridge and mitral isthmus.31 Although lesion formation is due to several parameters, one of which includes CF, force visualisation may help improve CF in these areas, potentially leading to more durable lesion formation. In contrast, excessively high CFs have been shown in animal models to be associated with steam pop and crater formation, and consciously avoiding such high forces with CF visualisation may reduce complication rates.32 Impedance values during mapping and impedance drop that occurs at the start of RF application was also shown to correlate with CF, which has since been confirmed in a recent publication by Reichlin et al.33

Secondly, comparison of CF guided with non-CF guided LA mapping and PVI ablation was performed, and the impact of CF on AF recurrence was analysed. A total of 70 patients underwent PVI, in which operators were blinded to CF data in 35 patients, and CF was displayed in the other 35. A total of 8,401 mapping and 2,064 ablation points were analysed. Our results demonstrated that during CF guided ablation, more points were taken within the optimal CF range defined as between 10 g and 40 g, and in particular the median CF obtained at the mitral isthmus and LAA ridge was higher when CF was displayed (7.7 g versus 12.2 g and 5.3 g versus 11.7 g, respectively). In respect to complication risk, we noted that there were excessively high CFs seen at the roof areas when CF was not displayed, and this was not seen when operators were aware of forces applied and could avoid high and potentially dangerous CFs. Interestingly, there was no difference in the AF recurrence rates after a follow-up of six months, and these data will be further analysed with longer term follow-up.

Thirdly, catheter stability using CF data was assessed. Of the multiple factors influencing lesion formation, catheter stability has been shown to be important.34,35 During CF blinded PVI, performed in 32 patients, 932 points were analysed – 426 visually stable and 506 visually unstable points. Stability was calculated as standard deviation of CF, and relative standard deviation (RSD) was used, which significantly correlated with visual catheter stability. We demonstrated that catheter instability occurred predominantly at the LAA ridge and posteroinferior segments of the right PVs.

Finally, the clinical impact of CF during antegrade transseptal and retrograde transaortic mapping of the left ventricle (LV) was assessed.29 In total, 3,324 mapping points using non-steerable sheaths in 10 patients were analysed. Although we showed that the median CF obtained from either approach was similar (antegrade = 16.0 g, retrograde = 15.3 g), there were significant differences between the CFs obtained at different LV segments. This suggests that LV mapping with only one approach may lead to poorer catheter-to-myocardial tissue contact in various areas of the LV, and a combined approachmay improve overall LV mapping.

ThermoCool® SmartTouch® Catheter Ablation Using the VisiTag™ Module
There are currently no published data regarding the short- and long-term outcomes when the VisiTag™ Module is used in combination with CF data to guide catheter ablation. Our institutional standard for VisiTag™ Module settings during LA ablation are as follows:

When the CF data are added as an additional parameter in the VisiTag™ Module criteria, regular tags as described above are taken, unless the CF is below the pre-specified cut-off. When all other parameters except the CF cut-off are met, a ‘grey point’ is tagged to mark this region (see Figure 1). Although several different parameters are required for effective lesion formation, the use of objective CF tagging may improve one of the major criteria for successful ablation, and could potentially improve short- and longterm clinical outcomes.

Conclusion
Contact force technology is a novel measurable parameter that can be measured and controlled during catheter ablation of various cardiac arrhythmias. Due to the importance of this parameter in achieving effective lesion formation and therefore potentially improving long-term clinical outcomes, several new ablation catheters that measure CF have been introduced into the market. This novel technology may also decrease the rate of complications associated with catheter ablation. Although further studies are required, the addition of the VisiTag™ Module, a relatively objective indicator for several different ablation parameters, may assist operators in forming long-lasting RF lesions, and may improve clinical outcomes from catheter ablation of various cardiac arrhythmias. 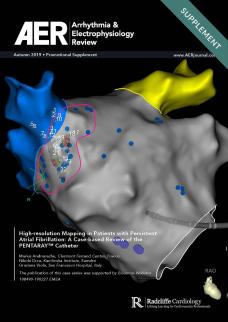