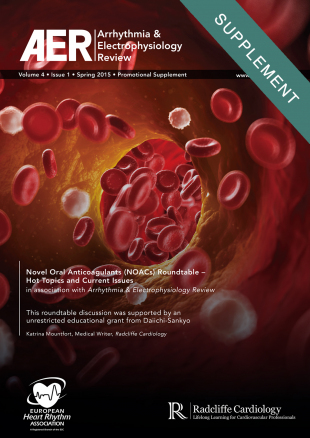 Login or register to view PDF.

Atrial fibrillation (AF) is the most common abnormal heart rhythm and is associated with a fivefold increased risk of stroke, and therefore represents a significant global healthcare burden. Recently, the therapeutic options for AF have increased, following the availability of non-vitamin K antagonist oral anticoagulants (NOACs).1,2 In order to discuss some of the most important issues regarding NOACs, a roundtable event was held in London on 12 November 2014, with the following objectives: to review the established evidence base for non-vitamin K antagonist (VKA) thromboprophylaxis in AF; to consider recent and emerging data on NOACs in AF trials and registries; to discuss on-going NOAC research in patients with AF; to identify and refine the indications for specific NOACs in AF; and to establish the nature of further NOAC research needed for new AF indications. The expert panel was chaired by John Camm (St George’s, University of London, UK) and also included Marco Alings (Amphia Ziekenhuis, Julius Clinical Research Julius Center, UMC Utrecht, the Netherlands), Raffaele De Caterina (G d’Annunzio University-Chieti and G Monasterio Foundation-Pisa, Italy), Paulus Kirchhof (University of Birmingham, UK), Jean-Yves Le Heuzey (Georges Pompidou Hospital, René Descartes University, Paris, France), and Freek Verheugt (Onze Lieve Vrouwe Gasthuis, Amsterdam, the Netherlands)

The use of NOACs in patients with AF is associated with benefits in terms of mortality and major bleeds, especially intracranial haemorrhage, but concerns persist regarding their use. This roundtable discussion has addressed several important matters, including the importance of registry data, dosage frequency, the monitoring of blood levels of NOACs and the development of antidotes, the use of NOACs in specific patients and the optimum choices of NOACs. While there remains a need for further clinical trial data, the expert panel concluded that, with the exception of patients with severe renal impairment, NOACs are safe and effective in the large majority of patients