Biventricular pacing has revolutionised the treatment of heart failure in patients with sinus rhythm and left bundle branch block; however, left ventricular-lead placement is not always technically possible. Furthermore, biventricular pacing does not fully normalise ventricular activation and, therefore, the ventricular resynchronisation is imperfect. Right ventricular pacing for bradycardia may cause or worsen heart failure in some patients by causing dyssynchronous ventricular activation. His bundle pacing activates the ventricles via the native His-Purkinje system, resulting in true physiological pacing, and, therefore, is a promising alternate site for pacing in bradycardia and traditional CRT indications in cases where it can overcome left bundle branch block. Furthermore, it may open up new indications for pacing therapy in heart failure, such as targeting patients with PR prolongation, but a narrow QRS duration. In this article we explore the physiology, technology and potential roles of His bundle pacing in the prevention and treatment of heart failure.

His bundle pacing in humans was first described in 1970 by Narula et al.1 They demonstrated that it was possible to stimulate the His bundle to produce normal physiological ventricular activation via the His-Purkinje system. However, the first report of permanent His bundle pacing, by Deshmukh et al., did not occur until 2000.2 In that study, His pacing was performed in a series of patients with impaired left ventricular systolic function and AF prior to atrioventricular (AV) node ablation.

The lack of dedicated tools for implantation initially hampered enthusiasm; however, the development of specially designed sheaths and leads for delivering permanent His bundle pacing has led to a renewed interest. The potential role of His pacing in heart failure is large: it may prevent the development of pacing-induced cardiomyopathy; it may be used as an alternative to biventricular pacing in patients with heart failure and left bundle branch block (LBBB); and it may extend pacing therapy in heart failure to patients with narrow QRS and PR prolongation by providing AV synchrony without inducing ventricular dyssynchrony.

Anatomy of the His Bundle and Implant Technique

The bundle of His extends from the compact AV node to the membranous interventricular septum, and measures approximately 20 mm in length. The bundle is a cord-like structure made up of multiple strands, which, even before the branching, are predestined to become the right or left bundle branches. His bundle pacing can be achieved by placing the lead at the atrial portion against the septum.

The most commonly used lead for His bundle pacing is the 69 cm Select Secure™ 3830 (Medtronic). This is a non-stylet-driven active fixation lead. Importantly, the screw forms part of the tip electrode allowing penetration of the capsule of the bundle of His and, therefore, direct stimulation of the His bundle fibres. The lead can be delivered to the His bundle region using either the specially-designed non-deflectable His delivery sheath (C315 43 cm; Medtronic) or a deflectable sheath (C304 69 cm; Medtronic). Unlike traditional lead placement that primarily uses fluoroscopic guidance, His lead placement primarily uses electrical mapping. An electrogram from the lead tip is displayed using placement via either a lab electrophysiology system or a standard pacing system analyser.

A His signal is targeted, aiming for the local ventricular electrogram to be approximately twice the amplitude of the atrial signal (Figure 1). To confirm successful His capture, a 12-lead ECG is used to assess the QRS morphology with pacing. Criteria used to establish whether His capture has occurred are well described.3 Recently-published data suggests thresholds of <2.5 at 1 ms should be achieved.3 An increase in pacing threshold is observed in ~10 % of patients, leading to shorter battery duration. There is also a higher rate of lead revisions (6.7 %) due to loss of capture or increased threshold.4

His pacing has the potential to provide better pacing solutions in several clinical situations compared with existing techniques. It may be useful in preventing pacing-induced cardiomyopathy, and pacing therapy may be an option for patients with existing heart failure in a range of settings (Figure 2). 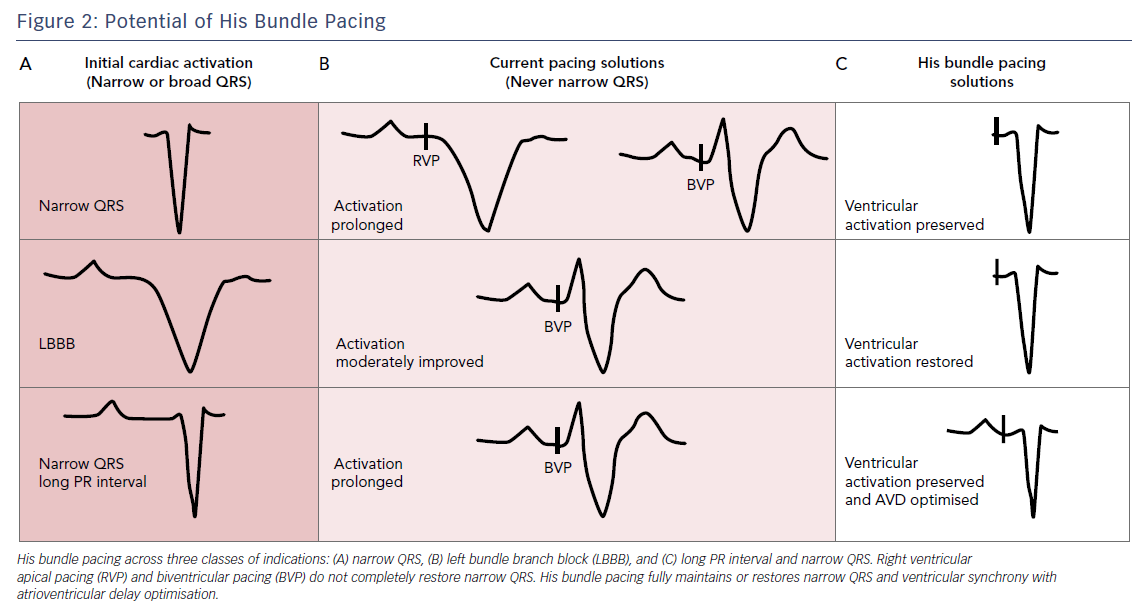 His pacing offers an elegant solution to potentially avoid pacing-induced deterioration in cardiac function. Since activation occurs via the normal conduction system, it does not result in ventricular dyssynchrony.18 Compared with right ventricular pacing, His pacing results in improved LVF both acutely19 and with chronic pacing.20 Pacing-avoidance algorithms may be unnecessary, which has the advantage of allowing physiological AV delays to be programmed.

There have been no large randomised controlled-outcome studies comparing His pacing with right ventricular pacing; however, the available data are encouraging (Table 1). Data from observational studies show chronic His pacing, in patients with a bradycardia pacing indication, appears to be feasible and safe.4 His pacing success rates have improved with the development of dedicated tools, and, in this population, successful His lead implantation occurs in 90 % of patients. 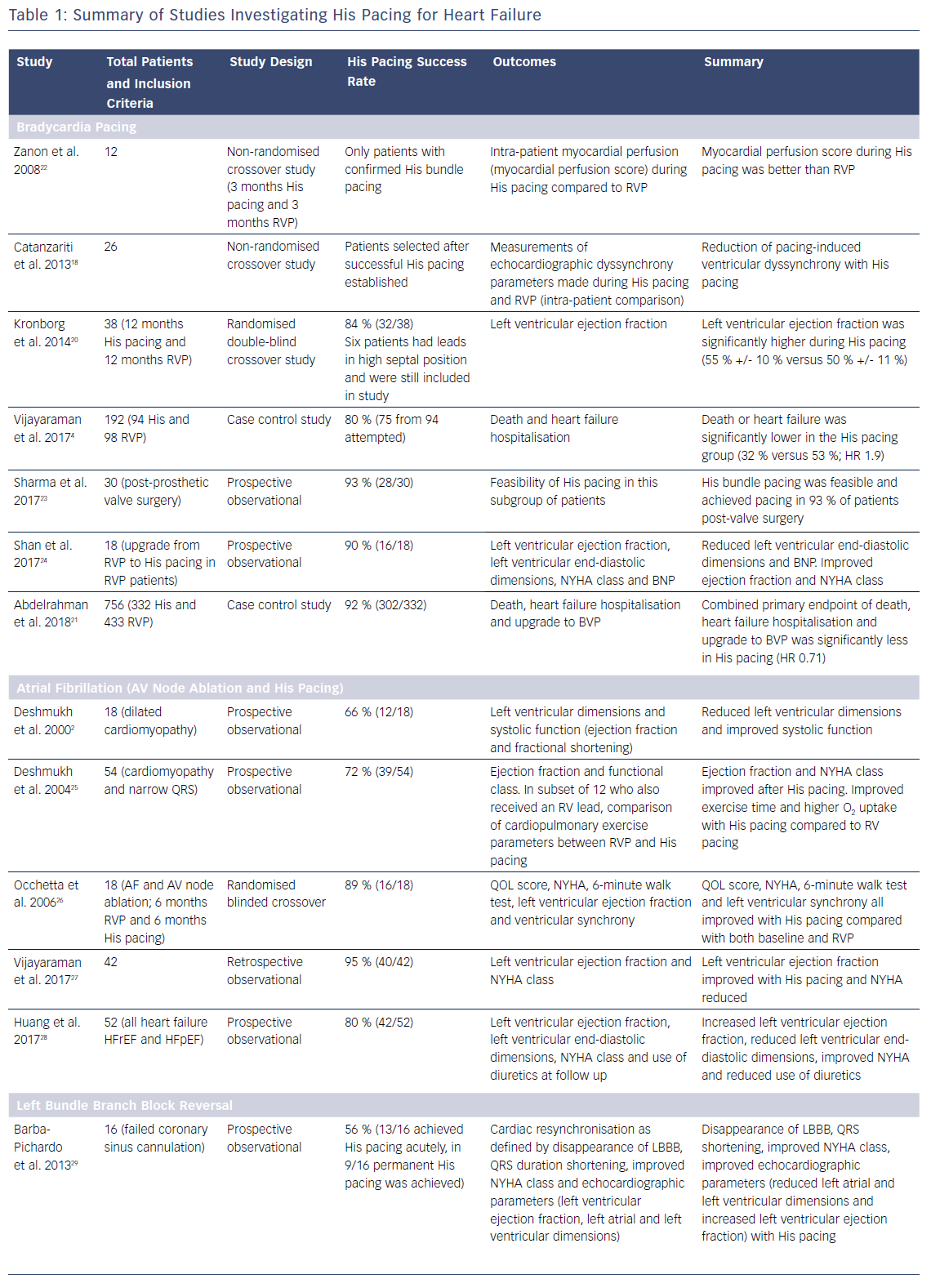 A recent non-randomised case control study found that patients who received His pacing for a bradycardia indication had a lower incidence of death and hospitalisation for heart failure compared with a group of patients treated with right ventricular pacing.21 A randomised controlled trial is now required to establish whether these encouraging results translate into clinical benefits in adequately-powered randomised control trials.

Theoretically, His pacing is a better method for delivering pacing since the lead can be positioned distal to the ablation site, and can maintain normal conduction via the His-Purkinje system. This is also an option in patients with a narrow QRS where inadequate rate-controlled AF contributes to poor LVF.

Heart failure patients were the first group in which permanent His pacing was applied. Despite lacking dedicated tools for His pacing, Deshmukh et al. achieved successful His pacing in 60 % of patients and were able to successfully perform AV node ablation with the His lead in situ.2 Improvements in left ventricular systolic function and left ventricular dimensions were observed.

Observational studies performed with dedicated tools for His pacing have found a higher rate of implant success (Table 1). A recent study successfully achieved permanent His pacing in 80 % of patients with both heart failure with a preserved ejection fraction and heart failure with reduced ejection fraction. These patients had AF and a narrow QRS, and despite rate-controlled AF they observed a reduction in hospital admissions, diuretic use, symptoms and improved cardiac function.28 However, despite the benefits seen in observational data, no randomised controlled studies are available.

There is significant potential to deliver additional improvements in cardiac function if more effective ventricular resynchronisation can be delivered.38

His bundle pacing is an alternative technique for delivering cardiac resynchronisation therapy. It can dramatically shorten QRS duration (Figure 3) and restore normal intrinsic activation patterns in some patients with ventricular conduction delays.

A number of mechanisms have been proposed for His bundle pacing narrowing or reversing a bundle branch block (Figure 4):

His pacing has been shown to be feasible in this population of patients. Reductions in QRS duration have been observed in 70–92 % of patients with LBBB (Table 1). The reductions in QRS duration appear to be maintained even with chronic pacing, and mean thresholds are similar to those seen for left ventricular leads; for example, in one study thresholds to achieve this are 2.0 V at 1 ms (mean threshold 1.4 V at 1 ms). There has been no demonstrated correlation with QRS morphology and axis, and QRS normalisation patterns (i.e. even broad LBBB with left axis deviation where the lead is unlikely to be screwed in distally to the block).

His pacing has the advantage that it does not require the use of contrast and can often be performed more quickly than left ventricular lead placement. However, adequately powered randomised studies are required to compare this strategy for resynchronisation therapy with biventricular pacing. In 2016 recruitment started for the His Bundle Pacing Versus Coronary Sinus Pacing for Cardiac Resynchronisation Therapy (His-SYNC; NCT02700425) study, which is aiming to randomise 40 patients to either His pacing or biventricular pacing and will look at time to first cardiovascular hospitalisation or death.

Heart Failure in Patients with Narrow QRS and PR Prolongation

There PR prolongation may represent a treatment target in patients with heart failure and normal QRS duration or right bundle branch block (RBBB). Delivering biventricular pacing to this group of patients may induce ventricular dyssynchrony relative to normal intrinsic activation, which may offset some of the beneficial effects of AV delay shortening.16 In the context of a normal QRS, biventricular pacing can increase mortality.16,37,46

His pacing has the advantage that it may allow AV delay to be optimised while normal intrinsic ventricular activation is maintained. We have previously demonstrated that acute haemodynamic function is improved with AV-optimised His bundle pacing in patients with heart failure and PR prolongation with either a normal QRS or RBBB.47 The magnitude of acute haemodynamic corresponded to approximately 60 % of the benefit seen in patients with LBBB receiving biventricular pacing (Figure 5). 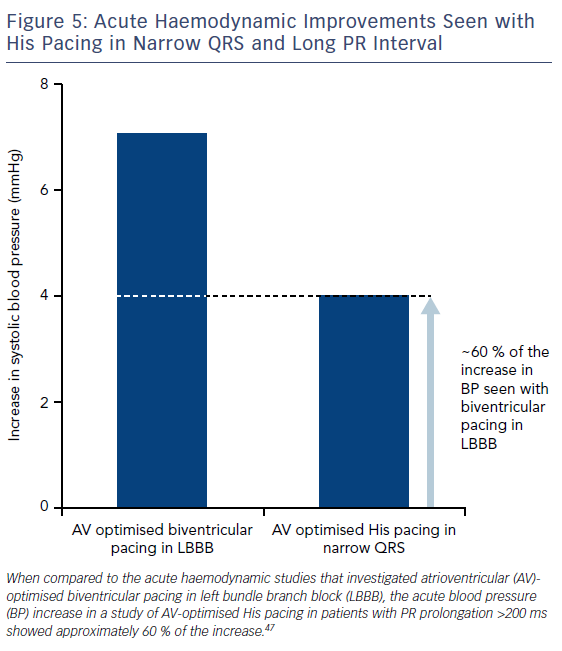 The His Optimised Pacing Evaluated for Heart Failure Trial (HOPE-HF; NCT02671903) trial is a multicentre, double-blind, randomised, crossover study that aims to randomise 160 patients with PR prolongation (≥200 ms), left ventricular impairment (ejection fraction ≤40 %), and either narrow QRS (≤140 ms) or RBBB. Participants are first randomised to either 6 months with the His lead programmed on or off before crossing over to the alternate arm. The primary endpoint is exercise capacity measured using cardiopulmonary exercise testing. When randomised to the His pacing arm, the patients are set to an AV delay determined by our high resolution haemodynamic optimisation protocol.45 If the results are positive then this would offer the potential of a new therapeutic option to a cohort of patients with heart failure who are not currently eligible for pacing therapy for heart failure.

There is currently limited published data available for His pacing in any clinical setting. While pacing thresholds for His pacing in bradycardia appear to be stable, there is limited long-term follow-up data available. When His pacing is used to deliver ventricular resynchronisation in patients with bundle branch block, the pacing thresholds can be relatively high, though comparable to left ventricular pacing thresholds. This has the potential implications on battery longevity, though pacing is only required via a single lead (compared to biventricular pacing). Success rates for His lead implantation have been as low as 60 % without dedicated tools and experience. Success rates have improved with the development of dedicated tools; however, the range of tools currently available are still limited, and these could be further improved.

Adequately powered randomised control trials are required to investigate whether the theoretical advantages of physiological ventricular activation are achieved with His pacing and if the encouraging results in observational studies translate into clinical benefit.

Finally, current device-based algorithms do not dovetail with His bundle pacing and this pacing sphere could benefit from industry investment in His pacing customised algorithms.

His pacing is a novel pacing therapy that allows ventricular stimulation to occur via the normal conduction system. Therefore, it maintains normal ventricular activation in patients with a narrow QRS duration and may even reverse bundle branch block.

Technical limitations have restricted the use of this therapy despite its existence for over four decades. In recent years tools dedicated to His pacing have been developed, which have improved the ease with which His pacing can be delivered. His pacing is now technically feasible in most patients and has shown promising results in small, mainly non-randomised studies in various clinical situations.

His pacing may be beneficial in the prevention of pacing-induced cardiomyopathy, as an alternative to biventricular pacing in patients with heart failure and LBBB, and as a method for extending pacing therapy for heart failure to patients with narrow QRS and PR prolongation. Large randomised studies are now required to provide confirmation these promising results translate into proven clinical benefits.