For more than 100 years physicians have observed that heartbeats following extrasystolic beats are characterised by augmented myocardial contractility. This phenomenon was termed post-extrasystolic potentiation (PESP). In the 1970s it was first noted that PESP measured at the blood pressure level is typically pronounced in heart failure patients. Only recently, it was shown that PESP measured non-invasively as post-extrasystolic blood pressure potentiation was a strong and independent predictor of death in survivors of myocardial infarction and in patients with chronic heart failure. A similar parameter (PESPAfib) can be also assessed in patients with atrial fibrillation. PESP and PESPAfib can be understood as non-invasive parameters that indicate myocardial dysfunction. They have the potential to improve risk stratification strategies for cardiac patients.

In 1885, Oscar Langendorff was the first person to describe the increase in contractility (‘Pulsverstärkung‘) that follows an extrasystole.1 Langendorff experimented with spontaneously beating isolated frog hearts. He recorded the heartbeats by using a lever that transferred the contractile movements of the heart to a rotating drum. Electrical stimulation resulted in premature contractions that were followed by compensatory pauses. In these experiments, he noticed that myocardial contractility during the first post-ectopic beats was typically stronger compared with the normal beats (see Figure 1A). Decades later, this phenomenon was termed postextrasystolic potentiation (PESP).2

PESP is present at the level of the myocardium, independently of pre- or afterload conditions.3 The driving force behind the augmented post-extrasystolic contractility is augmented calcium release from the intracellular stores during the post-extrasystolic action potential.4,5

Historically, PESP has been studied intensively with regard to two possible clinical applications (reviewed in Cooper3):

Besides these now widely abandoned applications, several studies have documented an interesting relationship between PESP and myocardial dysfunction. 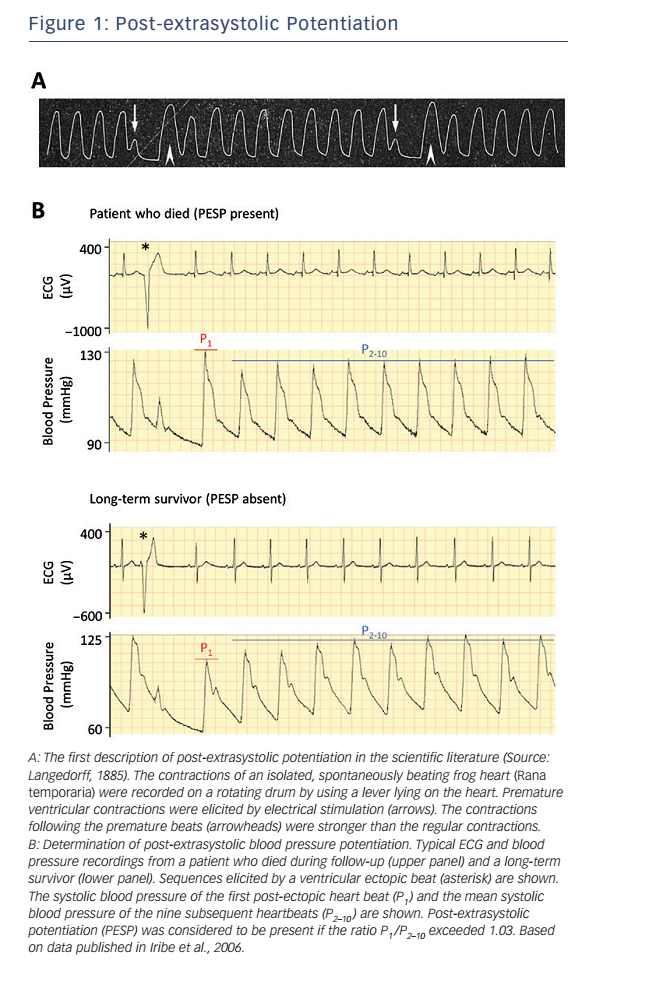 Both animal experiments12 and simulation studies13 indicate that increased PESP might result from heart failure-induced alterations of intracellular calcium cycling. In failing myocardium, the steady-state calcium content of the intracellular stores is reduced due to increased diastolic calcium leak via the ryanodine receptors. Starting from this lower steady state, the relative augmentation after an ectopic beat may be increased as compared with non-failing myocardium.

Already in 1971, Beck et al.6 reported that the potentiation of the first post-extrasystolic blood pressure wave is typically seen in failing ventricles but rarely in healthy hearts. The authors concluded that PESP measured on the level of blood pressure could be used to detect ’abnormal‘ left ventricles. However, the use of PESP as a diagnostic tool for myocardial dysfunction has not been pursued further for many years.

Post-extrasystolic Potentiation as a Risk Predictor in Cardiac Patients

To investigate whether PESP at the blood pressure level is associated with adverse outcome in cardiac patients, we prospectively analysed its correlation with mortality in a cohort of 941 survivors of acute myocardial infarction (MI).14 To establish a new, simply applicable, non-invasive risk predictor, we decided to investigate PESP at the blood pressure level using non-invasive measurements. On days5–9 after MI, patients underwent a 30-minute recording of ECG and blood pressure. Blood pressure was continuously recorded using a photoplethysmographic finger cuff device. PESP was assessed after spontaneously occurring ventricular premature contractions (VPCs).

Of the 941 patients, 220 (23.4 %) exhibited at least one VPC suitable for PESP quantification during the 30-minute recording period. In these patients, we calculated the ratio of the systolic blood pressure of the first post-ectopic beat (P1) divided by the average blood pressure of the nine following beats (P2–10; see Figure 1B). We considered PESP present if the ratio was >1.03 (i.e. if the post-VPC pulse wave exceeded the mean of the nine subsequent pulse waves by more than 3 %). According to this definition, PESP was present in 62 (28.2 %) and absent in 158 (71.8 %) of the 220 patients in whom PESP could be quantified.

In multivariable analysis considering LVEF, VPC count and GRACE (Global Registry of Acute Coronary Events) score as independent variables, PESP remained a strong independent predictor of mortality with a hazard ratio of 3.2 (95 % confidence interval 1.8–5.7; see Figure 2B). If applied together for post-MI risk stratification, PESP and LVEF provided complementary information (see Figure 2C). Patients in whom both parameters were normal were at a low 5-year mortality risk of 5.1 %. Patients, in whom one of the parameters was abnormal, had a substantially higher risk of 18.2 % (LVEF abnormal) or 23.8 % (PESP abnormal). The small group of patients in whom both parameters were abnormal had an excess 5-year mortality risk of 46.7 % (see Figure 2C).

There was no evidence for relevant confounding by baseline variables such as age, sex, diabetes mellitus or baseline medical therapy (use of b-blockers, ACE inhibitors, statins, diuretics, acetylsalicylic acid or clopidogrel). If any of these variables was additionally included in a Cox regression model consisting of PESP, LVEF, VPC count and GRACE score, the association of PESP and mortality remained highly significant.14

To validate these findings in a different patient population, we analysed data from a previously reported cohort of 146 patients with chronic heart failure,15 who were followed up for 2.7 years. At inclusion, all patients also underwent a continuous blood pressure measurement allowing PESP assessment. The mortality rate during follow-up was 28.8 %. Also in this cohort of heart failure patients, presence of PESP was a strong and independent risk predictor, with mortality amounting to 42 % and 20 % in patients with PESP present and absent/not calculable, respectively.14

PESP as described above can only be assessed in patients with sinus rhythm. However, in atrial fibrillation, the myocardial force-interval relationship translates the random variability of beat-to-beat intervals into a corresponding pulse pressure variability.16,17 We hypothesised that a parameter analogous to PESP could also be determined in atrial fibrillation. Therefore, we developed a PESP-analogous parameter (PESPAfib) and  evaluated its association with mortality in a small cohort of 32 MI survivors with atrial fibrillation.18 The ECGs were screened for short–long sequences, in which a heartbeat interval shorter than 80 % of the local average (Pi) was followed by an interval longer than 140 % of the local average (Pi+1). Based on the systolic blood pressure values elicited by Pi and Pi+1 and the corresponding RR intervals (RRi and RRi+1), we calculated PESPAfib as (Pi+1-Pi) / (RRi+1-RRi), i.e. by relating the systolic pressure change to the RR interval change.18

PESPAfib values were significantly higher in non-survivors than in survivors. When dichotomised at its median, PESPAfib distinguished between patient groups with 5-year mortality rates of 63 % and 19 %, respectively. The association of PESPAfib with mortality was independent from established risk factors such as LVEF, diabetes mellitus, age or the mean heart rate.

Taken together, these results indicate that PESP (and PESPAfib in atrial fibrillation) is a promising new risk predictor for cardiac patients.

One explanation for the close association of PESP and mortality in cardiac patients is that PESP is a surrogate parameter for myocardial dysfunction. It remains to be investigated whether PESP will be useful for clinical applications beyond risk stratification.

If changes in the clinical status of a patient translate into changes of PESP, PESP might become a tool to monitor the therapy of heart failure patients. This would be especially interesting since, in theory, sensors and algorithms necessary to quantify PESP might be incorporated into implantable cardiac devices such as pacemakers, ICDs or event recorders.

To test the hypothesis that PESP could be used to monitor the clinical status of heart failure patients, we initiated a study in which patients with acutely decompensated heart failure undergo PESP assessments at admission, before discharge and after 4 weeks. In addition, NT-proBNP (N-terminal of the prohormone brain natriuretic peptide) plasma levels are determined. Preliminary data from two patients are shown in Figure 3. Numerical PESP ratios (i.e. P1/P2–10) at admission were >1.03 in both patients, meaning that both patients would be classified as ’PESP present‘ according to the definition used in the post-MI study described above.14 In one of the patients (Patient 1), PESP numerical ratio at discharge decreased to 0.98, re-classifying the patient as ’PESP absent‘ at this time point. Concomitantly, the NT-proBNP plasma level was also lower at discharge than at admission. In the other patient (Patient 2), both PESP numerical ratio and plasma NT-proBNP level increased from admission to discharge. While the correlation of PESP with natriuretic peptide levels in these examples is encouraging, it is necessary to include additional patients before any solid conclusions can be drawn.

It is also possible that PESP could be used in the general population to predict cardiac events or to identify patients with unrecognised cardiac conditions. This hypothesis is currently being addressed in the ongoing INVADE (Prevention of Stroke and Dementia in Primary Care) study,19 in which PESP was determined in a general population sample of 1,900 patients aged ≥65 years, who are now followed up for cardiovascular events. Follow-up of this study will be completed in late 2016.

Another open question is whether PESP might improve patient selection for primary prophylactic ICD therapy. The limitations of LVEF in this regard are well known20 and the complementary nature of the prediction of post-MI mortality by LVEF and PESP (see Figure 2C) suggests that this might be the case. However, it should be noted that, in this study, the primary endpoint was all-cause mortality. While PESP was also significantly associated with cardiac death and with sudden cardiac death (with p values of 5.9 × 10-5 and 1.9 × 10-4, respectively), the numbers of events (38 and 14, respectively) were too small to investigate whether the association of PESP with these more specific endpoints was independent from established risk predictors or whether PESP is differentially associated with sudden and non-sudden cardiac death. It is, therefore, possible that presence of PESP identifies a patient group that typically dies from a cause (e.g. progressive heart failure) that cannot be prevented by ICD therapy. Accordingly, larger studies are necessary to investigate the utility of PESP to identify ICD candidates. 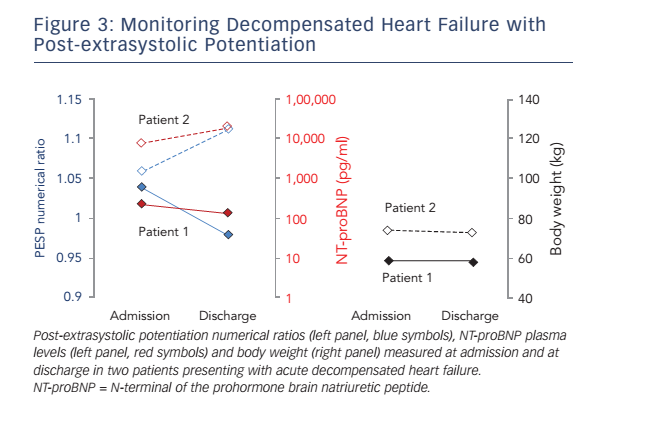 Post-extrasystolic blood pressure potentiation is a strong and independent risk predictor in survivors of MI and in heart failure patients. An analogous parameter (PESPAfib) can be determined in patients with atrial fibrillation. Open questions are whether PESP is suitable as a parameter for therapy monitoring and whether it may aid patient selection for prophylactic ICD therapy.