The closed chest convergent procedure is a multidisciplinary approach to atrial fibrillation (AF) treatment. Epicardial posterior left atrial (PLA) ablation is performed by a cardiac surgeon using a transdiaphragmatic endoscope, immediately followed by percutaneous pulmonary vein (PV) isolation performed by a cardiac electrophysiologist. Interim outcomes for the treatment of non-paroxysmal AF (NPAF) were evaluated based on peri-procedural safety and complications, freedom from recurrent AF, and need for cardioversion or repeat catheter ablation at three, six and 12 months post-procedure. A total of 43 patients (86 % NPAF) underwent the convergent procedure. Patients were 84 % male, with mean age 58.6 ± 8.7 years. Mean AF duration was 45.4 ± 40.3 months. Pre-procedure left atrium (LA) volumetric data using cardiac magnetic resonance imaging (MRI) or computed tomography (CT) was available for 30 patients (70 %). Average LA volume was 155.5 ± 48.4 millilitres (ml); two-thirds of patients had a LA volume >130 ml. There was no operative or peri-operative mortality. Sinus rhythm (SR) was recorded at three months in 31 of 39 (79 %) patients, at six months in 24 of 27 (89 %) patients and at 12 months in nine patients. The convergent procedure is a safe and effective option for both PV isolation and PLA substrate ablation in NPAF patients. Long-term follow-up is required and randomised clinical trials warranted.

Disclosure:Amit J Thosani, Robert Moraca and William Belden have consulted for nContact Inc. The remaining authors have no conflicts of interest to declare.

Support:The publication of this article was supported by nContact Inc.

Atrial fibrillation (AF) is the most common cardiac arrhythmia worldwide. In 2010, the prevalence of AF in the US was estimated at 5.9 million.1 The decision to pursue treatment to maintain sinus rhythm is driven by disabling symptoms related to AF; including palpitations, dyspnoea, fatigue, stroke and congestive heart failure. Percutaneous catheter-based ablation is an established therapy for symptomatic paroxysmal AF resistant to antiarrhythmic medications. However, treatment of non-paroxysmal atrial fibrillation (NPAF), including persistent and long-standing persistent AF, is much less effective.2 Endovascular catheter ablation for NPAF is limited by short- and long-term recurrent AF and lower arrhythmia-free survival compared with catheter ablation for paroxysmal atrial fibrillation (PAF).3,4 Particular patient characteristics, including continuous AF greater than six months duration and enlarged left atrial volume, may predict lower success rates with endovascular catheter-based ablation.5 These patients may experience post-ablation recurrent AF due to the inability to effectively perform substrate ablation in addition to pulmonary vein isolation.

Open chest and thoracoscopic epicardial surgical ablation techniques have been developed to address technical limitations of endovascular catheter ablation. However, these surgical approaches have disadvantages including peri-operative morbidity, extended hospitalisation and recovery, post-operative pain, inability to confirm bidirectional block of the pulmonary veins, and inability to reach endovascular sites to treat left or right atrial flutter.6,7

The convergent procedure was designed to address the limitations of both catheter and surgical ablation by offering a synergistic, multidisciplinary approach that does not require sternotomy, thoracotomy or thoracic ports.8 Closed chest, endoscopic epicardial ablation is combined with standard endocardial catheter ablation techniques to isolate the pulmonary veins (PVs) and ablate the posterior left atrium (PLA) substrate that may promote and/or sustain AF. Convergent epicardial–endocardial ablation is performed within the electrophysiology (EP) laboratory. Its closed chest access allows for maintenance of therapeutic peri-procedural anticoagulation and minimises post-procedure pain and length of stay. The epicardial ablation catheter used in the convergent procedure has been demonstrated to create continuous, transmural linear lesions in a canine model,9 and offers the advantage of PLA substrate ablation with unipolar radiofrequency (RF) energy directed anteriorly, thus minimising damage to the oesophagus and other posterior structures. We detail our single-centre experience with the convergent procedure for treatment of NPAF in a predominantly NPAF population with left atrial enlargement. 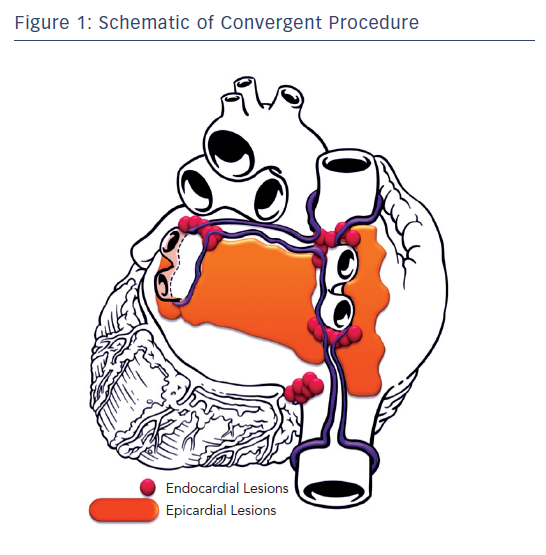 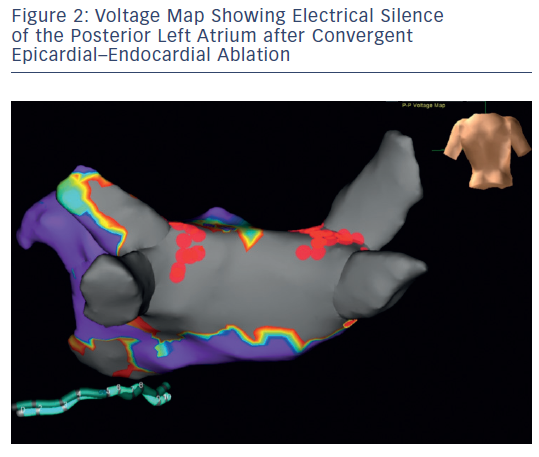 Forty-three patients with predominantly disabling NPAF resistant to class I or class III antiarrhythmic medications with no prior history of open chest cardiac surgery underwent ablation therapy between June 2010 and February 2013. The convergent procedure was recommended after consultation with both a cardiac electrophysiologist and a cardiac surgeon based upon one or more of the following:

The patients were prepped and draped in the standard sterile fashion. Cardiac computed tomography (CT) or magnetic resonance imaging (MRI) as well as transesophageal echocardiogram (TEE) were performed pre-procedure. A subxiphoid incision was made to access the pericardial space through a transdiaphragmatic pericardial window, created through the central tendon of the diaphragm. A 20 millimetre (mm) cannula was inserted through a transdiaphragmatic, pericardial window to allow direct access and visualisation of the PLA.10 Epicardial ablation was accomplished with the Numeris® Guided Coagulation Device (nContact Inc, Morrisville, North Carolina, US). Vacuum was used to ensure constant contact with epicardial tissue. Saline perfusion, controlled by the vacuum, cooled the device and epicardium to ensure localised efficient ablation. After completion of epicardial ablation, a pericardial drain was placed to mitigate the risk of tamponade during endocardial ablation and during the peri-operative period. 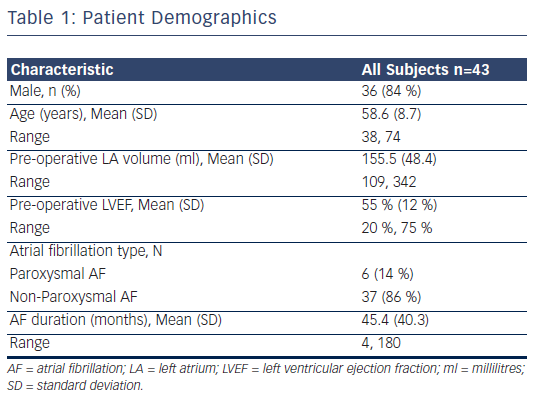 The endocardial component of the procedure was initiated immediately after completion of epicardial PLA ablation. Bilateral femoral venous access was obtained. A diagnostic 20-pole recording catheter was advanced to the anterolateral right atrium and coronary sinus. Double transseptal access was obtained under intracardiac echocardiography guidance. Heparin was administered throughout left-sided catheterisation to ensure activated clotting time (ACT) remained between 300 and 400 seconds. Electroanatomic mapping (NAVx, St. Jude Medical, St Paul, MN, US) was used to create geometry and voltage maps to guide endocardial ablation. Bidirectional block (entrance and exit block) was confirmed in each pulmonary vein in all patients. After completion of epicardial and endocardial lesions, atrial burst pacing was performed during intravenous isoproterenol infusion (up to 15 micrograms per minute [mcg/min]) to assess atrial arrhythmia inducibility. A schematic lesion pattern from epicardial–endocardial ablation is shown in Figure 1.

All patients were discharged on antiarrhythmic drug (AAD) therapy. AAD status, including the need for new or escalating therapy, was recorded at each follow-up. Anticoagulants were instituted post-procedure and continued for at least six months. Patients taking warfarin who had anticoagulation discontinued pre-procedure were bridged with Heparin until therapeutic anticoagulation was obtained post-procedure. Patients taking newer oral anticoagulants (NOACs), including dabigatran and rivaroxaban, had their anticoagulant held 24 hours before and resumed the night of the procedure.

Patients were scheduled for routine follow-up and 12-lead electrocardiography (ECG) at three, six and 12 months post-procedure. Additionally, a two-week cardiac event monitor was placed at six months to assess AF/atrial flutter (AFL) and atrial tachycardia (AT) burden. Subsequent AF treatments including changes in AAD therapy, repeat catheter ablation and need for electrical cardioversion were recorded at each follow-up visit.

Data was reported as mean ± standard deviation (SD) for quantitative variables; and counts and percentages for categorical measures. 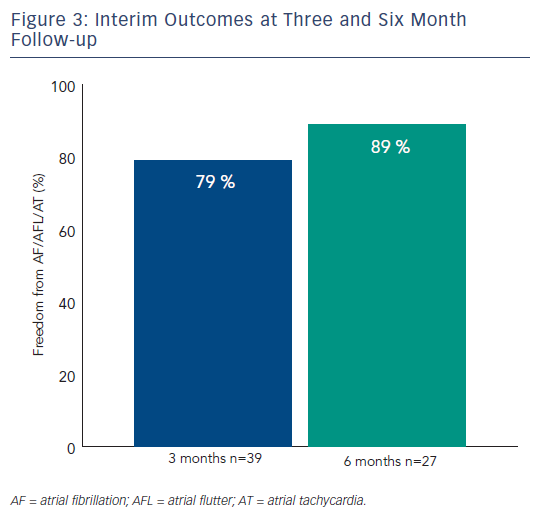 The percutaneous nature of catheter ablation overcomes many deficiencies of surgical ablation. However, endocardial ablation catheters direct energy away from the heart, increasing the potential to damage adjacent structures including the oesophagus; whereas epicardial procedures direct energy into the heat sink of the heart and reduce risk of damage to surrounding structures. Major adverse events during catheter ablation occur in 4–9 % of cases based on multicentre data from US national databases with in-hospital or peri-operative mortality of 0.24–0.96 %.11–14 While catheter ablation has become a primary treatment modality for paroxysmal AF, success has been less favourable for NPAF. Patients often require multiple interventions over a short period of time and outcomes are not sustained long-term.2,4,15 The deficiencies in catheter ablation outcomes are accentuated in patients with enlarged atria; success in patients with LA volume >135 ml was reported to be 18 % irrespective of AF type.5

The convergent epicardial–endocardial AF ablation procedure was designed to provide a safe and effective treatment option for patients with refractory NPAF, including those with enlarged atria and/or underlying structural heart abnormalities. Table 2 details published or presented data from five convergent ablation studies; outcomes demonstrate consistency in the ability to maintain sinus rhythm in NPAF patients at one-year post-procedure.

While long-term data is needed to further determine the durability of treatment, initial results are promising. A prospective study in a NPAF population with implanted loop recorders that underwent the convergent procedure demonstrated sinus rhythm maintenance in 88 % and 87 % of patients at one and two years, respectively.10

The outcomes presented in this paper show promising initial results in treating NPAF patients with enlarged atria, consistent with those published or presented previously. Our single-centre experience has demonstrated that both components of the procedure can be performed safely and efficiently without major adverse cardiac events. The lack of AF recurrence in patients with a left atrial volume <130 ml and the high interim success in patients with substantially enlarged atria highlight the applicability of treatment to the more complex patients that may not be optimal for endovascular catheter ablation alone. Whether the outcomes are the product of creating more definitive linear lesions, electrically silencing the posterior left atrium, or ablating focal AF drivers requires more investigation.

Multidisciplinary integration and coordination is inherent in the convergent procedure. The elimination of any chest incisions, avoidance of lung deflation, and simplification of the procedure by not dissecting the pericardial to left atrium attachments enable combining epicardial and endocardial ablation within EP standard practice. The closed chest epicardial and endocardial components are performed within the same anaesthetic setting, optimising patient care and integrating hospital operations, while minimising surgical risk. This multidisciplinary solution encourages the establishment of centres of excellence capable of addressing patient and payer demands while providing management options for all AF patient populations.

Convergent procedure outcomes from this and previous initiatives show that cardiac surgeons and electrophysiologists can collaborate to combine best practices for the management of patients with complex AF aetiologies. While further study remains necessary, the initial results have been encouraging and the procedure well-tolerated. Randomised clinical trials are warranted to compare treatment of NPAF with the convergent procedure versus endovascular catheter ablation alone.