A significant proportion of AF patients with advanced age are being treated in clinical practice. Cryoballoon ablation of AF, given its shorter procedure time and comparable efficacy to radiofrequency ablation, has rapidly become a commonly used tool for AF ablation. Data regarding the outcomes of cryoballoon ablation of AF in octogenarians are limited because of the exclusion of this age group in the previous studies. The authors report outcomes of 15 octogenarian AF patients undergoing index cryoballoon ablation at a single centre. The mean age of the included patients was 83 ± 3 years. In total, 13 patients (87%) presented with paroxysmal AF, and two (13%) had long-standing persistent AF. At 6 and 12 months of follow-up, freedom from AF was 80% and 70%, respectively. None of the patients suffered any procedure-related complications. Cryoballoon ablation appears to be a safe and effective approach for treating symptomatic AF refractory to antiarrhythmic drug therapy in octogenarian patients, based on outcomes in this cohort. These findings require further validation in prospective randomised studies with larger sample sizes.

AF is a common and clinically impactful arrhythmia. Given both the association of AF with aging and the increasing number of elderly people in the general population, it follows that many AF patients are of advanced age. The management of AF in the geriatric population is associated with several challenges, including multiple comorbidities, increased toxicity of antiarrhythmic drugs (AAD), an increased risk of complications from invasive procedures and an increased risk of stroke and bleeding complication secondary to anticoagulation use.1,2

Catheter-ablation-based pulmonary vein isolation (PVI) has become the most commonly performed procedure for the management of AF.3 Traditional radiofrequency-based point-by-point ablation has shown favourable clinical success rates, but is associated with a long learning curve, significant procedure time, and often the need for multiple procedures in order to achieve durable PVI.4,5 The use of cryoballoon ablation catheters to achieve PVI has been associated with a shorter procedure time with comparable efficacy compared to radiofrequency ablation approaches and has rapidly become a commonly used tool for AF ablation.6 While the safety and efficacy of AF ablation have been demonstrated in many clinical trials, the outcomes of cryoballoon AF ablation in the very elderly is limited. In this case series, we report our institutional experience with second-generation cryoballoon-based PVI in octogenarian patients.

We describe the safety and efficacy outcomes of 15 octogenarian patients undergoing index AF ablation using the second-generation cryoballoon at the Johns Hopkins Hospital between 2012 and 2019.

The study participants were non-consecutively included and derived from an institutional review board-approved, prospectively populated clinical database of AF ablation patients. Demographics, clinical history, procedural data, complications, and outcomes were recorded for each case. Patients were excluded if they had prior catheter ablation of AF, left atrial thrombus detected on pre-procedural transoesophageal echocardiography (TOE) or CT scan, and advanced comorbidities and frailty precluding catheter ablation. Arrhythmia recurrence and peri-procedural complications were ascertained based on monitoring strategies described in the 2017 Heart Rhythm Society consensus document.3 Arrhythmia recurrence was defined as any AF or atrial tachyarrhythmia sustained for >30 seconds recorded by a surface ECG or rhythm-monitoring device after a 90-day blanking period. Procedure-related complications, such as major bleeding, minor bleeding, phrenic nerve palsy, cerebral embolism, pericardial effusion/tamponade, atrio-oesophageal fistula or extended hospitalisation, were assessed.

AAD management was left to the discretion of the operator. Pre-procedure TOE was performed only for the patients presenting in AF at the time of ablation, as per the institutional practice. All patients underwent a preprocedural CT scan to assess the left atrium (LA) and pulmonary vein (PV) anatomy in detail. Catheter ablation in patients on warfarin was performed without cessation of warfarin and patients on direct oral anticoagulants (DOACs) underwent cessation of anticoagulation for 12–24 hours prior to the ablation procedure, with resumption 4 hours post-procedure. Anticoagulation was continued for a minimum of 3 months following ablation procedure for all patients unless contraindicated. 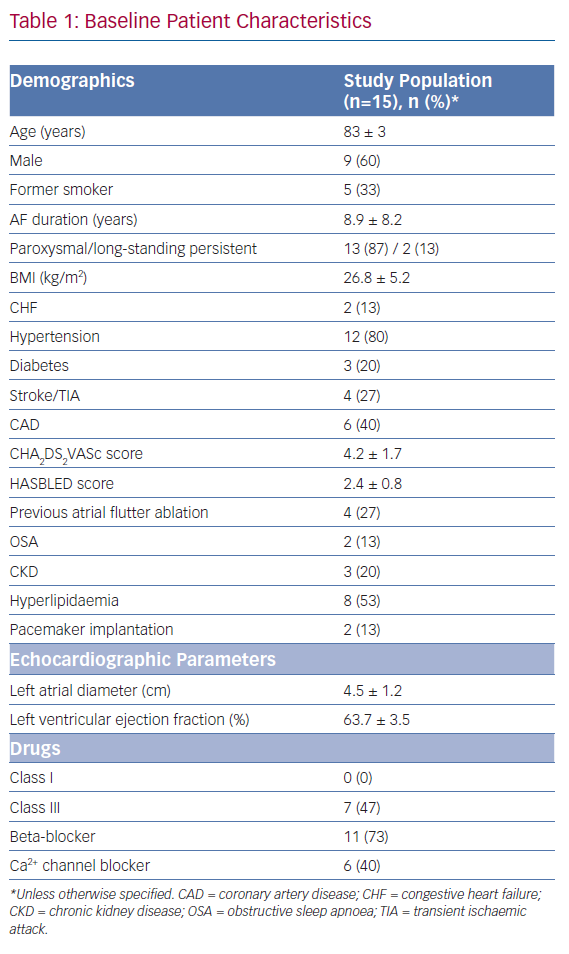 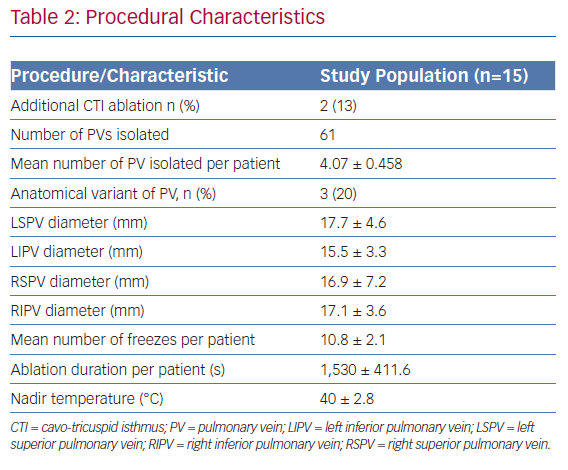 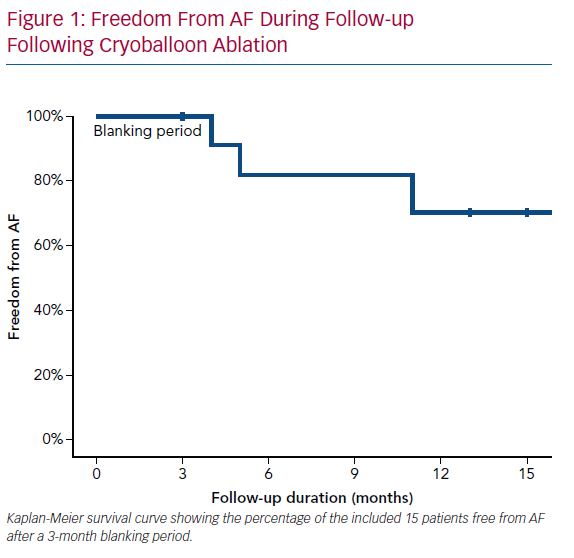 All ablation procedures were performed under general anaesthesia. Femoral site access was obtained and intravenous heparin administered to maintain activated clotting times >350 seconds. After a trans-septal puncture at the fossa ovalis, a long deflectable sheath (FlexCath Advance sheath, Medtronic) was introduced into the LA using intracardiac echocardiographic guidance. Pulmonary venous angiograms were obtained for each of the four PVs to serve as a fluoroscopic reference. An endocardial map of the LA was created via the CARTO-Biosense system (Carto 3, Biosense Webster or Ensite NavX, St Jude Medical). Right-sided phrenic nerve pacing was performed by placing a catheter against the phrenic nerve at or above the level of the superior vena cava. A second-generation cryoballoon catheter with a 23 or 28 mm balloon (Arctic Front Advance, Medtronic) and a PV mapping catheter were passed into the LA via the long sheath. Cryo lesions were targeted to the PVs after the demonstration of balloon occlusion with contrast injection. Goal temperatures were between −35°C and −55°C. Freezes were aborted if the oesophageal temperature fell below 28°C or if phrenic nerve pacing showed diminution of diaphragmatic excursion during right-sided PV lesion delivery. Following the delivery of at least two lesion sets per vein, electrical isolation of each PV was reassessed, and additional applications of cryotherapy delivered with either a 28 mm or 23 mm second-generation cryoballoon. Additional cavo-tricuspid isthmus (CTI) ablation using radiofrequency energy was performed at the discretion of the operator in patients with history of clinically documented typical atrial flutter. An endocardial map of the right atrium was created. His bundle position was identified and marked. Radiofrequency energy was delivered to create a line of electrical block along the CTI, which was verified by bidirectional, differential atrial pacing. Intracardiac electrograms and conduction were measured at rest and after ablation. 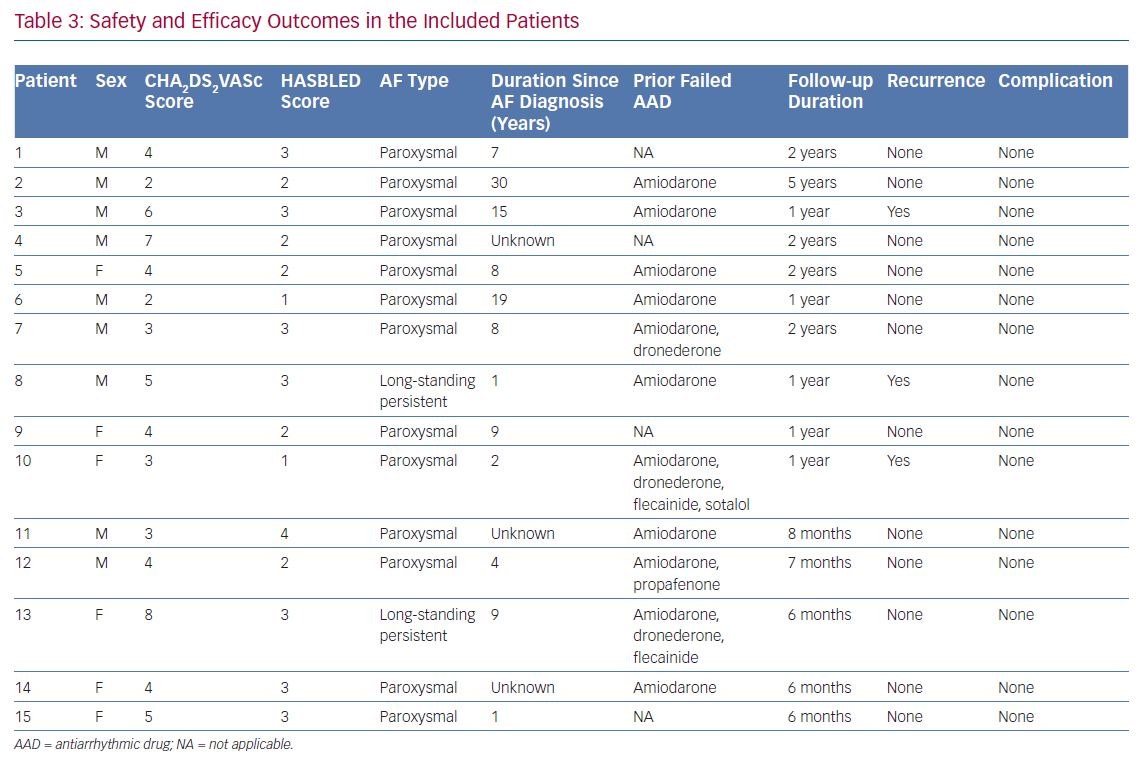 All patients were observed in the hospital for a minimum of one night post-ablation. Routine follow-up (history, exam, and electrocardiography or Holter) was performed at the outpatient clinic or by a local cardiologist at 3, 6 and 12 months and additionally, if prompted by symptoms. Status of symptoms, including AF burden and effect of ablation on quality of life, was assessed in each patient at follow-up visit. Event monitors were arranged for patients in whom symptoms suggestive of AF developed in the post-blanking phase of follow-up. AAD therapy, if present at the time of ablation, was discontinued at the 3-month follow-up visit. Outcomes were assessed via electronic health record reviews or telephone interviews.

Of the 15 patients, five (33%) had catheter ablation performed on continuous anticoagulation with warfarin and the remaining 10 (67%) underwent ablation on minimally interrupted DOAC anticoagulation. Four patients (27%) presented in AF at the time of ablation and underwent preprocedural TOE to rule out left atrial appendage thrombi before cryoballoon ablation. Table 2 describes the procedural characteristics. In all the patients, 100% of PVs were successfully isolated at the end of the procedure. Three patients had variant PV anatomy (one patient each with left common, left middle, and right middle PVs). Two patients underwent additional CTI ablation. None of the patients suffered any procedure-related complications.

Efficacy of Ablation with Follow-up

During a mean follow-up duration of 15.8 months (range 6–60 months), AF recurred in three patients. The freedom from AF recurrence was 80% and 70% at 6 and 12 months of follow-up, respectively (Figure 1). Thirteen of the 15 patients reported significant reduction in symptoms and AF burden associated with improvement in quality of life following catheter ablation. Anticoagulation following catheter ablation was continued in all the patients at 3 months follow-up visit except in one patient who developed occult gastrointestinal bleeding secondary to gastritis. Table 3 provides patient specific safety and efficacy outcome data for all patients included in this report.

The success rate was 70% at 1 year of follow-up, and there were no complications. Our results serve to extend and confirm those of a number of prior publications that have reported the outcomes of cryoballoon ablation in elderly patients with AF.7–16 The definition of ‘elderly’ in these series included patients aged as young as 70 years, and the reported success rates range from 62 to 87%. In the aggregate, these studies have investigated safety and efficacy rates at 1 year in a total of 2,235 patients. In all the studies, no significant differences were seen in either efficacy or safety rates when comparing outcomes with non-elderly patients. The most commonly reported complication was transient phrenic nerve palsy. The reported incidence of phrenic nerve palsy with cryoballoon ablation ranges from 4 to 14%. Phrenic nerve palsy is described to occur more commonly with right superior PV (RSPV) ablation because of the proximity of the right phrenic nerve to the RSPV. Several risk factors for phrenic nerve palsy during cryoballoon ablation have been identified, including shorter distance between the RSPV and right phrenic nerve, larger ostial vein size, circular shape of pulmonary vein ostium and greater obtuse angle between the RSPV and LA.17

Our series differs from prior studies in that ours included patients of more advanced age than in most of the previously published investigations. Only one prior study, by Kanda et al., examined the outcomes of cryoballoon ablation in octogenarians.13 Their study included patients with PAF and compared cryoballoon ablation outcomes in patient cohorts of age ≥80 years versus those <80 years. Among the 49 patients aged >80 years who underwent cryoballoon ablation, the success rate was 87%. None of the patients suffered any major complication, with transient phrenic nerve palsy being the most common complication.

Compared to the previous study of cryoballoon ablation in patients over the age of 80,13 the lower success rate in our report could possibly result from the inclusion of the patients with long-standing PsAF, higher CHA2DS2-VASc score, and greater LA diameter. Previous studies have reported that these factors are associated with a poor success rate of ablation procedure.18–20 In terms of safety, our findings are in line with the study by Kanda et al., with no reported major complications.13 Additionally, we also did not observe any transient phrenic nerve palsy. This could possibly be because of effective phrenic nerve monitoring during the ablation of right PVs, with immediate cessation of ablation in the case of diminished diaphragmatic motion. Moreover, the limited sample size in our report could also underestimate the complication rate. Although limited in size, the results of our series confirm and extend the results of prior studies, which have examined the outcomes of cryoballoon ablation of AF in the elderly and demonstrate an acceptable efficacy rate with minimal complications.

The findings of our report should be interpreted with attention to the associated limitations. These include the single-centre, retrospective and observational nature of the study and lack of a comparator group, the small sample and the lack of continuous ECG monitoring.

Based on our study with a limited sample size, cryoballoon AF ablation appears to be a safe and effective strategy for treating octogenarians with symptomatic AF refractory to AAD therapy. Our findings require validation by prospective randomised studies with larger sample sizes.