In 1845, a fibre bundle was discovered by Purkinje.3 In 1906, Tawara described the details of the Purkinje fibres as a conduction system.4 In 1972, Cohen et al. first reported that ILVT originated in the left posterior fascicular region.5 It was characterised by relatively narrow QRS complexes with right bundle branch block (RBBB) morphology and left axis deviation.

In 1979, Zipes described three characteristics of a specific form of ILVT: atrial pacing induction; RBBB with left axis deviation; and absence of structural heart disease.6 Two years later, Belhassen et al. proposed the fourth characteristic of this type of ILVT.7 They found that this type of ILVT could be terminated by verapamil and named it verapamil-sensitive ventricular tachycardia. Ohe et al. reported another form of ILVT with RBBB and right-axis deviation in 1988.8 In 1993, Nakagawa et al. found that presystolic Purkinje potentials could be recorded in the left posterior fascicular region and catheter ablation targeting the earliest Purkinje potential successfully eliminated the tachycardia.9

Anatomy of the Purkinje System

In the normal human heart, the atrioventricular node is located in the triangle of Koch. It gives rise to the penetrating His bundle, which is situated at the fibrous commissure formed by the right coronary cusp, the non-coronary cusp and the anterior and septal leaflets of tricuspid valve. It branches into the left and right bundles.10 The left bundle branch (LBB) is wider than the right bundle branch (RBB). In theory, the LBB divides into the left anterior and posterior fascicles, with or without the left septal branch. However, histopathological studies have demonstrated marked anatomic variation of LBB (Figure 1).11 Unlike the penetrating His bundle, which is encased in an insulating fibrous sheath, the LBB system consists of a complex network of conducting fibres.11 The density of distal Purkinje fibres depends on their anatomical distribution, with the highest density near the base of papillary muscles and the middle of the left ventricle. The distal Purkinje fibres can penetrate the endocardium and reach one third the thickness of myocardium.12 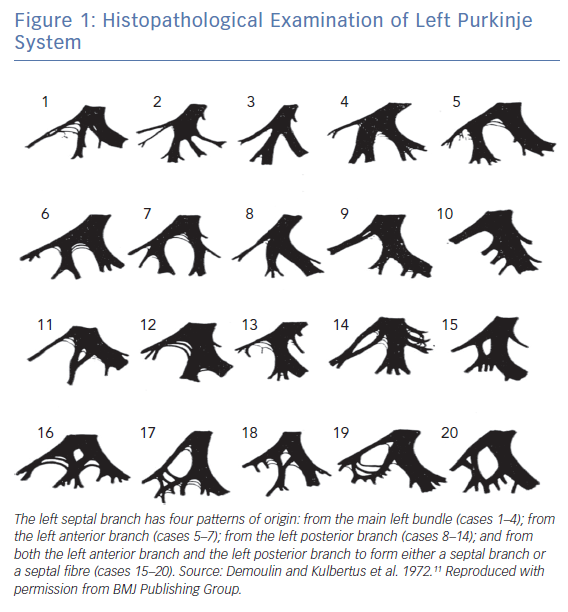 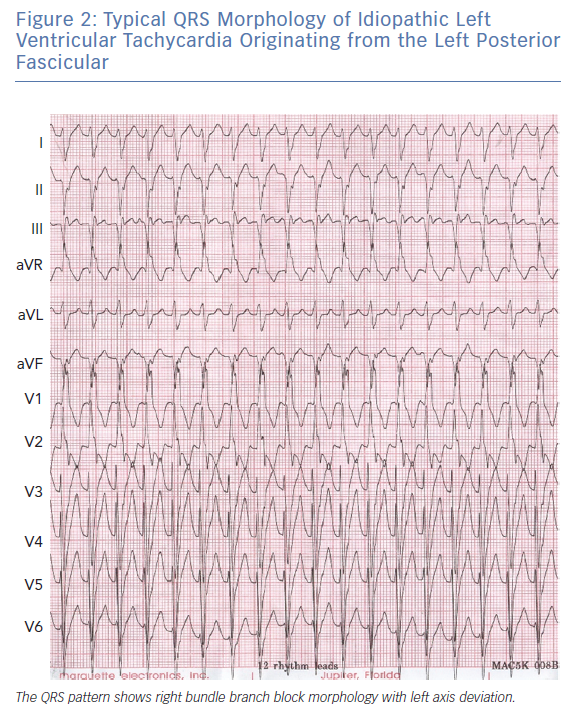 Purkinje-related VT is the most common type of ILVT; 60–70% of those with Purkinje-related VT are identified in young Asian men.1,2 Common symptoms include palpitations, fatigue, dyspnoea and dizziness. Syncope and sudden death are rare.15 While it can be triggered by exercise, it can also occur at rest.9,16 This type of VT is usually verapamil sensitive and can be classified into three subtypes according to the QRS morphology: left posterior fascicular VT, with RBBB morphology and left axis deviation (due to myocardial exit from the left posterior fascicle) (Figure 2); left anterior fascicular VT, with RBBB morphology and right axis deviation; and left upper fascicular VT, with narrow QRS complexes and normal electrical axis or right axis deviation.17,18 ILVT originating from the left posterior fascicle is the most common form, accounting for more than 90% of all cases.

Studies have shown that the mechanism of Purkinje-related ILVT is re-entry, as atrial or ventricular stimulation can induce, entrain and terminate the tachycardia. Echocardiography studies have demonstrated a higher prevalence of false tendons or fibromuscular band extension to the basal septum in patients with Purkinje-related ILVT.19–21 This suggests that the false tendons and fibromuscular bands may be involved in a reentrant mechanism in ILVT.13,14 Zhan et al. performed high-density, three-dimensional electro-anatomical mapping of the left ventricular septum in patients with Purkinje-related ILVT.22 In that study, the prevalence of fragmented potentials preceding the local ventricular activation in the left ventricular septum was higher than it was in the control group, which supports the hypothesis of re-entry.

Nogami et al. performed a study to demonstrate the mechanism of posterior fascicle-related ILVT (LPF-ILVT) by entrainment and resetting, using multipolar electrode catheters in the left ventricle.23 In 15 of the 20 patients, two distinct potentials (P1 and P2) were recorded at the left mid-septum of left ventricle. During VT, there was orthodromic activation of the P1 and retrograde activation of P2. During VT, P1 and P2 were activated in the reverse direction and converged at the distal recording site near the LV apex (Figure 3). Entrainment pacing at the apex of the left ventricle captured P1 orthodromically and produced QRS configurations similar to that of the clinical VT. The post-pacing intervals were similar to the tachycardia cycle length (Figure 4). Intravenous verapamil prolonged the tachycardia cycle length as well as the P1–P2 and P2–P1 intervals, with no effect on the P2–QRS interval. During sinus rhythm, only P2 was recorded at the same site, while the retrograde P1 was obscured by the larger ventricular potentials (Figure 3). Ablation at the site of the earliest retrograde Purkinje potential eliminated the conduction between P1 and P2. After successful ablation, P1 could be recorded after each QRS in sinus rhythm, with a base-to-apex activation pattern. The investigators demonstrated a macro-re-entry circuit with the antegrade limb involving specialised verapamil-sensitive Purkinje tissue (P1) with decremental conduction property, and the retrograde limb involving the left posterior fascicle (P2).

Ouyang et al. speculated that the reentrant circuit of LPF-ILVT may consist of antegrade and retrograde Purkinje potentials, bridged by ventricular myocardium.24 Recently, further investigation of the mechanism of LPF-ILVT was reported by Liu et al.25 In that study, multipolar electrode catheters were used to continuously record the P1 and P2 potentials. Both the P1 and P2 potentials could be recorded in 64% of patients, which is consistent with the findings of Nogami’s study.23 Using the entrainment and resetting responses, they proved that the slowly conducting myocardial tissue between P2 and P1 makes up the slow conduction zone of the tachycardia circuit (Figure 5). Moreover, they demonstrated that the site of the P1–P2 connection can be predicted by the HV interval during VT. A more negative HV interval predicted a more distal left posterior fascicular connection between the P1 and P2 potentials. 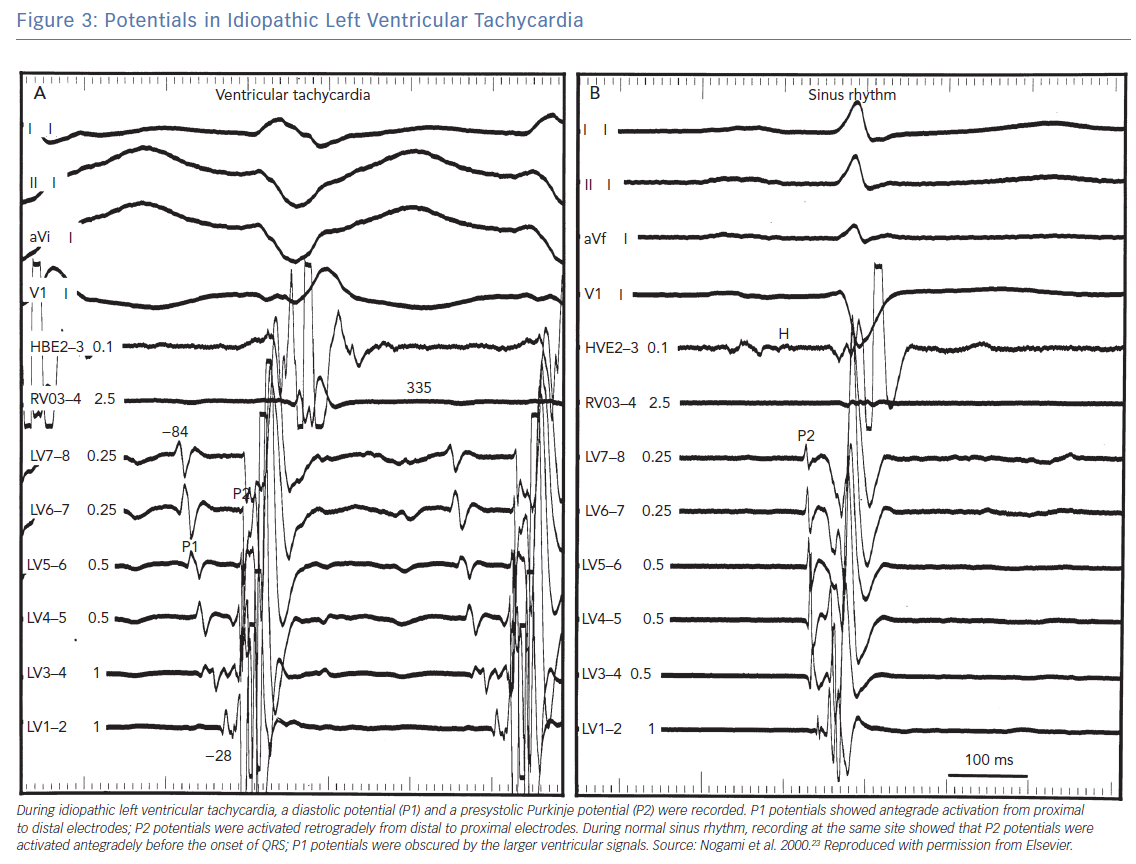 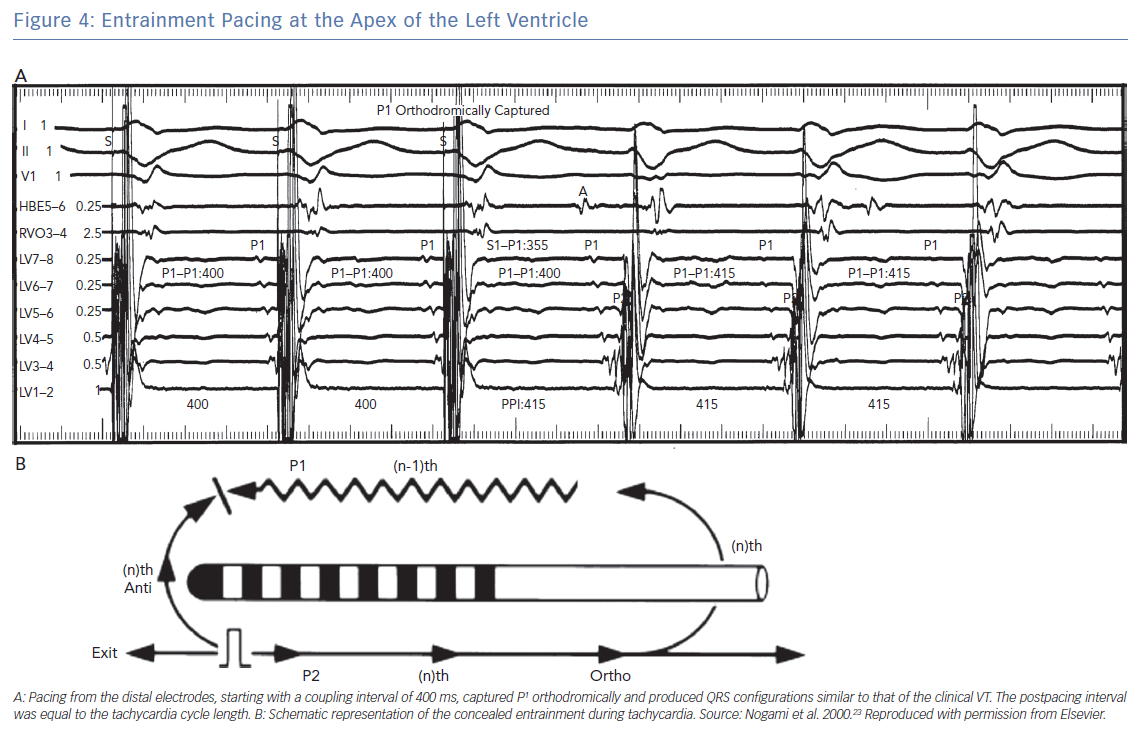 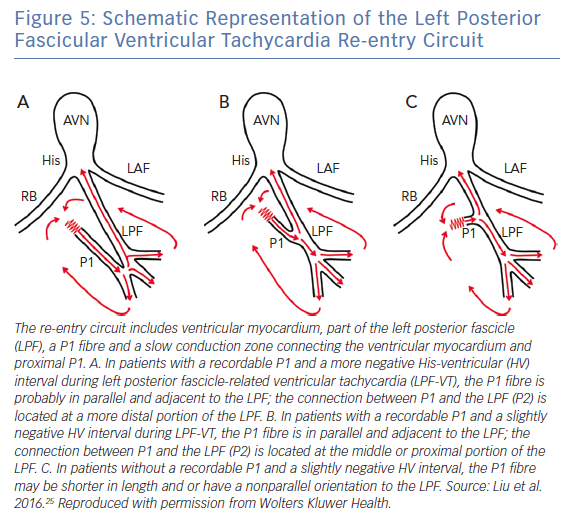 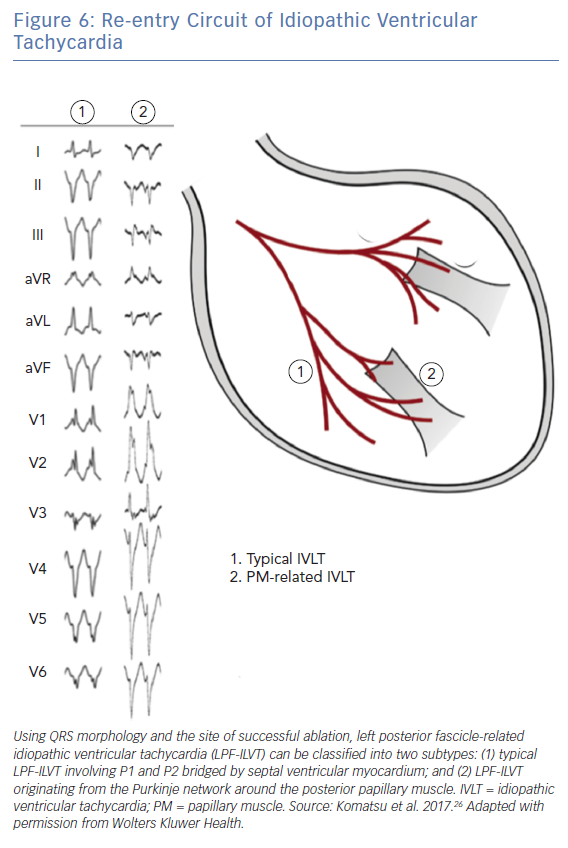 Komatsu et al. also demonstrated that the reentrant circuit of LPF-ILVT may involve the Purkinje system as well as neighboring papillary muscles; this was characterised by distinctive electrocardiographic features (Figure 6).26 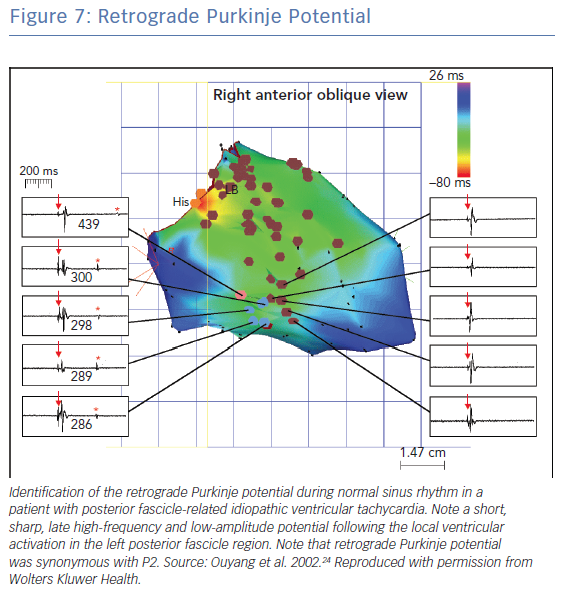 In patients with recordable P1 and P2 signals, the ablation target should be the P1 diastolic potential because it is a critical component of the tachycardia circuit. It should be ablated at the apical third of the septum, with a shift toward a basal site until successful ablation is achieved to avoid inadvertent injury to the LBB or the His bundle.23,27 In patients without a recordable P1 potential, the earliest retrograde Purkinje potential (P1) during tachycardia is the target of ablation.

Ouyang et al.. found that the sharp retrograde Purkinje potential (PP) following the local ventricular ECG could be recorded at the left posterior fascicular region during normal sinus rhythm in patients with LPF-ILVT.25 They also demonstrated that the retrograde PP during normal sinus rhythm correlated with the diastolic PP during tachycardia. Ablation at the retrograde PP sites rendered tachycardia non-inducible (Figure 7).

In contrast, Zhan et al.22 discovered a short, fragmented and high-frequency potential preceding the local ventricular activation in the LPF region in patients with ILVT (Figure 8). These fragmented signals could not be recorded in control patients. They speculated that the fragmented antegrade PP may represent an arrhythmogenic substrate in LPF-ILVT and may guide successful ablation.

Chen et al.. demonstrated that the earliest retrograde Purkinje potential (P2) site can be calculated by measuring the HV interval during tachycardia and the normal sinus rhythm.29 The successful ablation site was half of the HV interval between the normal sinus rhythm (A+B) and tachycardia (B-A) (Figure 9). They also found that the target site of P-V interval (B) during tachycardia was identical to that of during NSR (B). This method is especially useful in cases of LPF-ILVT that can be induced in the baseline and become non-inducible during mapping and ablation.

When the tachycardia cannot be induced during the procedure but the operator is certain that LPF-VT is the correct diagnosis, empirical linear ablation transecting the LPF can be an effective strategy, as reported by Chen et al.30

According to those studies, radiofrequency energy could be delivered during normal sinus rhythm or during tachycardia; both of these ablation strategies might make the tachycardia non-inducible. Recently, Creta et al.. reported a meta-analysis to assess the efficacy of the two ablation strategies.31 They found that ablation performed in tachycardia had a similar success rate after multiple procedures to with ablation in sinus rhythm only (95.1%, 95% CI [92.2–97%]; I2=0% versus 94.8%, 95% CI [87.6–97.9%], I2 = 0% respectively).

Most cases of LPF-ILVT recurrence are the reappearance of the tachycardia that was treated in the index ablation procedure. Recurrence secondary to new onset left upper septal VT is rare.32–34 The mechanism of upper septal VT remains controversial. One study demonstrated that the mechanism may be macro-re-entry since reversed diastolic potential (P1) and pre-systolic potential (P2) could be recorded. During LPF-ILVT, the P1 potentials recorded at multipolar electrodes showed antegrade activation from the proximal to distal, while P2 potentials showed retrograde conduction. During upper septal VT in the second procedure, the P1 and P2 activation sequences were reversed.32 In contrast, Guo et al. did not reliably record diastolic potential using three-dimensional mapping system.33 They argued for a mechanism of macro-re-entry or micro-re-entry in the upper septum where the circuit was unmappable. Regardless of the mechanism involved, the tachycardia can be ablated successfully by focal ablation in the proximal LV septum with titrated power from 10W to 25W to avoid injuring the His bundle. 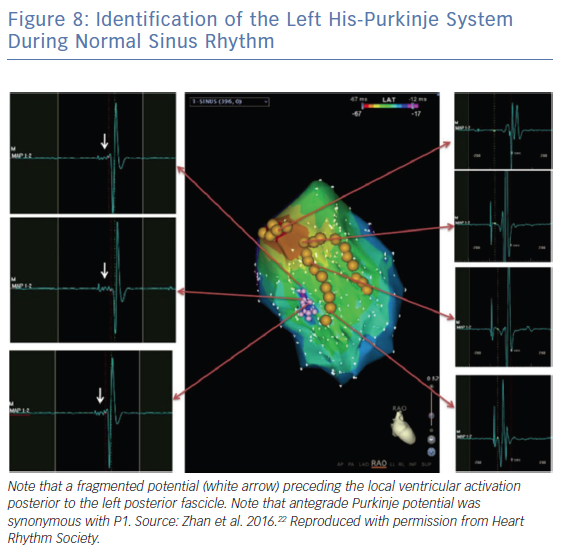 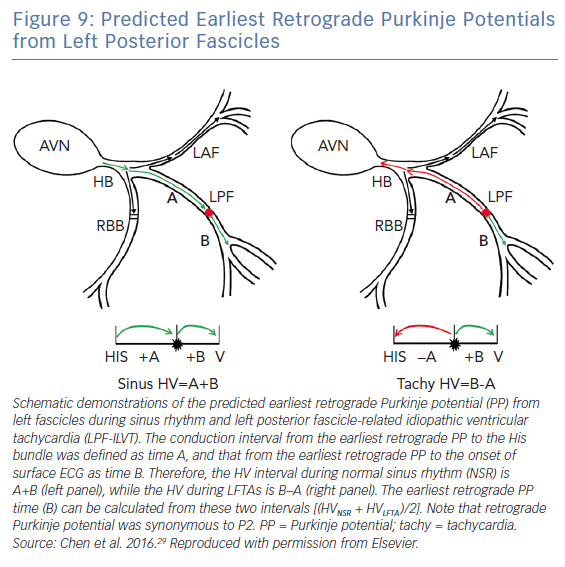