Vernakalant is an antiarrhythmic drug licensed for the pharmacological cardioversion of recent onset AF. Randomised clinical trials, backed up by real-world experience, have confirmed its efficacy at restoring sinus rhythm. Vernakalant can be administered simply with a short time to action, facilitating early discharge from hospital in selected patients in place of electrical cardioversion. The authors explore the data behind vernakalant and discuss how it can be introduced into clinical practice.

Disclosure:The authors have no conflicts of interest to declare.

AF is the most common clinical arrhythmia, affecting at least 1–2% of the population.1,2 Its prevalence increases with age, with 5% of people aged over 65 years developing AF, climbing to 8% in those aged over 75 years.3 AF is associated with increased morbidity and mortality and has significant public health implications.4 Patients presenting with new onset AF to emergency departments can be managed in a number of different ways, depending on the clinical scenario. In general, either a rate control or rhythm control strategy is chosen. When an early rate control strategy is selected, the options are either electrical cardioversion under sedation or to use a pharmacological agent to facilitate chemical cardioversion. The European Society of Cardiology 2016 guidelines recommend the use of flecainide, amiodarone, propafenone, ibutilide or vernakalant for pharmacological cardioversion, with the choice of agent guided by the presence of any underlying heart disease (Figure 1).5

Vernakalant is an atrial-selective compound that rapidly blocks potassium and sodium ion channels in all phases of the atrial action potential.6 Potassium currents that are expressed specifically in the atria and involved in atrial repolarisation are blocked before the secondary effect of sodium channels inhibition. Vernakalant is unique among antiarrhythmic drugs because its affinity for the activated sodium channel becomes greater as heart rate increases.7 The pharmacological profile of vernakalant addresses many problems of other antifibrillatory drugs by selectively targeting ion channels that are expressed primarily in atrial cardiomyocytes. Blocking the rapidly activating potassium current accounts for only mild QT prolongation and this rapidly returns to baseline after cessation of the infusion.8

The pharmacokinetic profile of vernakalant demonstrates rapid distribution with a short half-life, so therefore it is less likely to cause drug–drug interactions.7 Vernakalant is metabolised by the liver with a half-life of about 3 hours and up to 8 hours in poor metabolisers.9 Peak plasma concentrations are evident at the end of the 10-minute infusion butfall rapidly at the end of infusion. Vernakalant is contraindicated when:

Vernakalant should also be avoided when intravenous Class I and III antiarrhythmic drugs have been administered within the previous 4 hours. Prior to its administration, patients should be adequately hydrated with a normal potassium level.

Vernakalant is not recommended in patients with:

There is insufficient data relating to the administration of vernakalant if Class I or III intravenous antiarrhythmic drugs have been given between 4 and 24 hours prior to use. Furthermore, vernakalant should be used with caution in patients with NYHA Class I and II heart failure due to the increased risk of hypotension and non-sustained ventricular arrhythmias.

The Atrial arrhythmia Conversion Trial (ACT V; NCT00989001) Phase IIIb study of vernakalant in patients with recent onset symptomatic AF was stopped 2010 after a single serious case of cardiogenic shock following infusion of vernakalant, although it was not certain that the drug was involved. This was unpublished, and the ACT V study was discontinued. As a result, the European Medicines Agency updated the listed contraindications.10 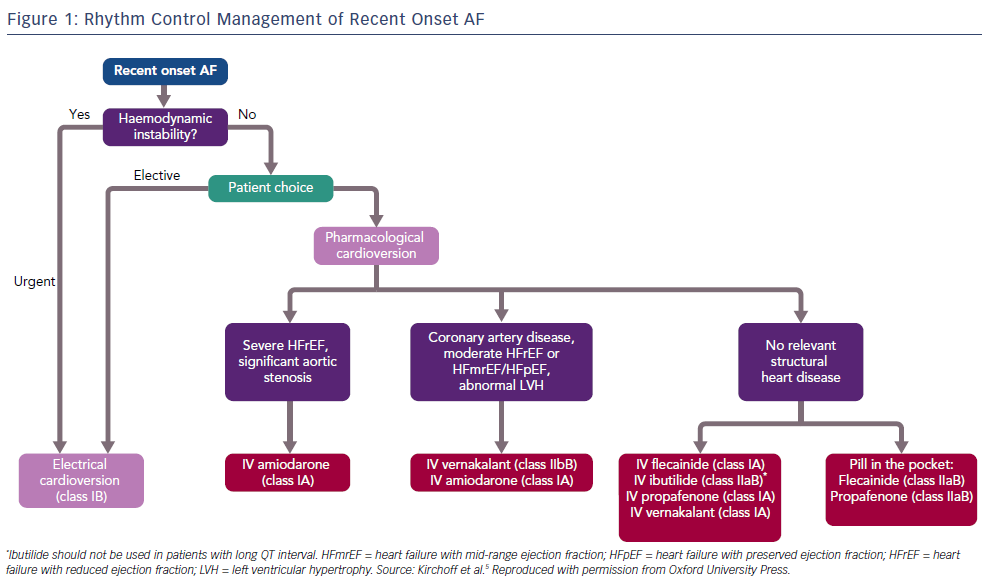 In a pooled analysis of safety data, 773 patients who received vernakalant and 335 who had placebo in the ACT I–IV, Conversion of Rapid AF Trial (CRAFT) and Phase II/III Tolerance and Efficacy Study of RSD1235 in Patients With Atrial Flutter (Scene 2) studies, demonstrated vernakalant to be well tolerated without clinically relevant adverse events compared with placebo or amiodarone.7,11 Serious adverse events related to medication administration was reported in 2.1% of people receiving vernakalant, compared to 0.3% of those receiving placebo.11 Hypotension as a serious event was reported in 1.2% versus 0.3% in the placebo group and when this occurred in the first 2 hours it was most common in patients with heart failure.11 Bradycardia was slightly more common in the vernakalant group, but rarely led to discontinuation of the drug. There was no significant effect on the ventricular rate during AF while receiving vernakalant and neither was there no excess in ventricular arrhythmias compared to placebo. Non-sustained ventricular arrhythmias were, however, more prevalent in the presence of heart failure and hence the cautionary use in this group (7.3% versus 1.6% in placebo at 2 hours).11

Vernakalant is administered intravenously as a weight-calculated dose and infused over 10 minutes. The patient requires continuous cardiac monitoring throughout with close observation of vital signs. If AF continues after a 15-minute observation time, the infusion can be repeated at a slightly lower dose.

Vernakalant should be given in a suitable environment, that is, one with emergency and defibrillation equipment available. Ideally, an echocardiogram should be performed prior to administration, or information from a recent scan available, to ensure that there are no structural contraindications for the use of vernakalant. An electrocardiogram in AF and another after cardioversion has taken place is also advisable.

One vial of vernakalant is sufficient for both infusions if needed, and if the infusion is well tolerated and can be given peripherally. A condensed version of the protocol for administration is shown in Figure 2.

The efficacy of vernakalant was researched in a single dose finding trial, three randomised placebo-controlled phase III trials, one randomised active-controlled trial with amiodarone, and a phase IV open-label study (Table 2).12–18 The ACT I and III trials showed vernakalant was significantly more effective than the placebo in converting AF of short duration (>3 hours to ≥7 days; 51.7% versus 4%; p<0.001; and 51.2% versus 3.6%; p<0.0001).14,15 When compared to amiodarone, vernakalant was more effective in achieving cardioversion of short duration AF (3–48 hours) within 90 minutes of drug infusion.12 The median time to conversion was 11 and 8 minutes, respectively, in the ACT I and III studies and rates of conversion was highest when the AF was of a duration ≤48 hours (62.1% versus 4.9%; p<0.001). The ACT IV study complemented this data and demonstrated restoration of sinus rhythm with vernakalant in 50.9% within 14 minutes.16

The ACT II study focused on post-cardiac surgery patients – coronary artery bypass or valvular surgery – who developed AF for between 24 hours and 7 days.13 Sinus rhythm was achieved in 47% versus 14% in the placebo group within 90 minutes (p<0.001) with a median conversion time of 12 minutes. 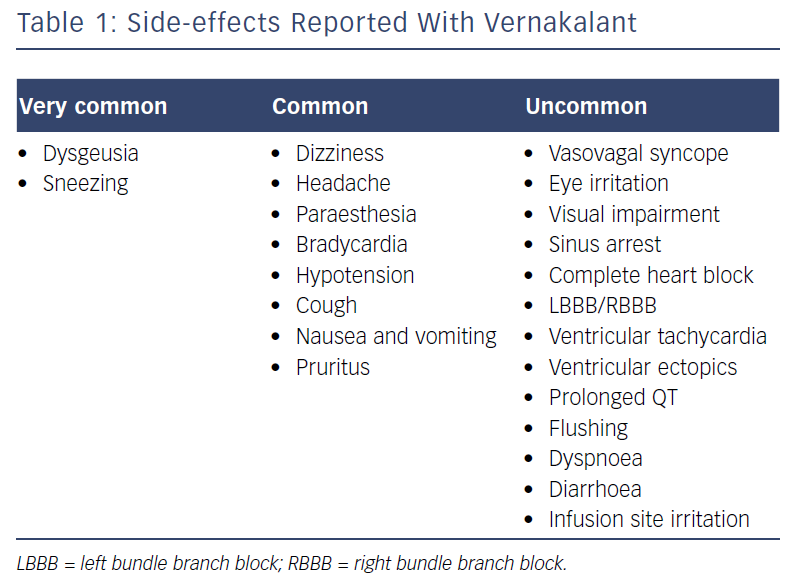 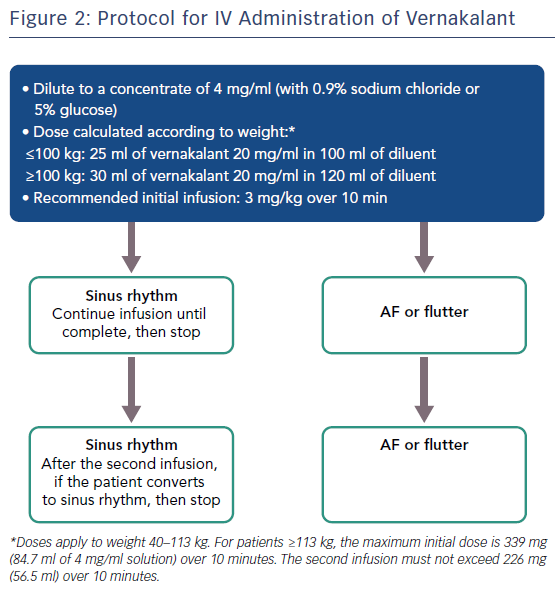 Post-marketing studies have identified high cardioversion success rates. A real-world study included patients of AF onset ≤48 hours demonstrated 84.5% conversion to sinus rhythm with mean time to conversion 9 minutes and total hospital stay averaging 165 minutes.21 The retrospective Malmö registry evaluated the median conversion time to be 11 minutes and 76% of patients converted to sinus rhythm when the AF duration was <10 hours compared to 66% when the AF was >10 hours.22 A retrospective single-centre, single-arm study, reported 86% successful cardioversions with vernakalant and a median time of 8 minutes.23

Vernakalant was compared to ibutilide in a recent trial, demonstrating similar conversion rates (52.78% versus 52.38% respectively), but more rapid average conversion time (11.8±4.3 minutes versus 33.9±20.25 minutes; p<0.0001).25 A greater number of patients in the vernakalant group were ready for discharge at 2 hours, compared to the ibutilide group (38.89% versus 11.9%, respectively).25 This further demonstrates the benefits of rapid conversion, including negating the need for electrical cardioversion, reduction in length of hospital stay, not needing concomitant treatments or longer-term antiarrhythmics, and a reduced risk of AF relapse.

A contemporary real-world study in Belgium evaluated 97 patients in the emergency department during 2017 and 2018 and concluded that 85.4% of patients avoided hospitalisation (95% CI [76.1–94.8]). The majority of treated patients (84.1%) did not need electrical cardioversion.28

The Efficacy of Vernakalant for Conversion of AF to Sinus Rhythm

Vernakalant is more expensive than other antiarrhythmic medicines, e.g. amiodarone and flecainide.25 A costing analysis was undertaken by Vogiatzis et al. in their trial comparing vernakalant with ibutilide.25 The ibutilide group were less likely to leave hospital at 2 hours and therefore incurred higher costs in terms of subsequent management and hospitalisation. While vernakalant is five to six times more expensive than ibutilide, the overall treatment costs were lower in the vernakalant group due to fewer adverse effects and shorter hospital stays. This is supported by the studies mentioned above, where more rapid discharge occurs due to successful early cardioversion with vernakalant, and it can be further supported by local audit data.

Local Use and Audit

In the British Isles, vernakalant was introduced in the Channel Island of Jersey in 2016, following approval from the local drugs and therapeutics committee. This involved production of robust protocols and policy. Review of the evidence and real-world data was necessary in order to inform our colleagues in relation to medicines governance and the practical aspects of implementation. Education and communication were central to this and has enabled a safe and effective process.

An on-going audit demonstrates an 87% success rate in the conversion from recent onset AF to sinus rhythm. There have been no serious untoward events, although a small number of patients have experienced sneezing as a side-effect. Vernakalant has mostly been used in the emergency department, although two patients were treated in the high dependency unit and later discharged home. Of the 87% who reverted to sinus rhythm, all were discharged home at 2 hours. The remaining patients were either discharged home in rate-controlled AF, with one patient admitted for overnight observation due to a slightly elevated heart rate in AF. All patients were seen at 4 weeks in the local arrhythmia clinic and at follow-up, 87% of patients remained in sinus rhythm with no AF recurrence.

Protocols and algorithms produced for the implementation of vernakalant have been shared with 10 centres in the UK, whom are making their own applications to obtain this novel antiarrhythmic.

Vernakalant offers a novel approach to pharmacological cardioversion. Ease of administration and success rates for the conversion of recent onset AF encourage utilisation, particularly in the emergency department and acute care settings. The safety profile is reassuring as long as patients are selected appropriately. Post-marketing studies continue to be conducted with systematic reviews and meta-analysis published, demonstrating continued efficacy and overall effectiveness.