Mark Josephson is without a doubt the most fascinating person I have ever met. I am proud to have had a close friendship with him and I miss him immensely. I have written in the past about his amazing academic contributions, but in a way I am relieved that this is not my topic today. I will instead talk about the unique aspects of his personality that allowed him to be a great leader in the field of electrophysiology and a powerful influence on the personal development of those of us who had the great good fortune of interacting with him closely. 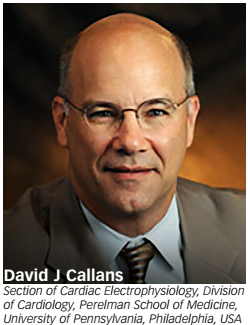 Mark’s intellect seems to have been the driving force of much of his behaviour. His gifts were substantial. He apparently had a total recall memory on all sorts of topics, not only cardiac electrophysiology and electrocardiography, but details of individual patients, Patriots football, fine wine and much more internal medicine than I have ever mastered. He was in the habit of pretending that this was all completely natural, and that he “never read anything”. I knew that his depth and breadth of knowledge was acquired the old fashioned way, however, by intense study. In addition to recall, he had blazing analytical skills, which he applied, again, to any number of topics from complex intracardiac tracings to interpersonal relationships. We occasionally differed on the topic of whether or not someone was to be trusted, either intellectually or personally. I would come to my conclusions after much consideration, he after a millisecond. I would try to change his opinion on people, thinking that he must have overlooked a key element, but he never faltered. Without exception, when more information became available I would end up realising he had been right all along.

So, what would one set out to accomplish, equipped with such formidable skills? I often wonder what it must have felt like from Mark’s perspective – thinking so very quickly must have made the efforts of 'neurotypicals' seem agonisingly slow. It must have been clear to him that genius has the responsibility of encouraging revolution, and that is what he did. His overriding creative principles were to never accept the limitations of the present and to always question everything, even one’s own work. These forceful principles often made others uncomfortable – it was a very exacting, difficult way to think, requiring discipline and an intact ego structure. Some found his constant challenging and superior intellect difficult to bear. Nonetheless, these are the qualities that drove him to fundamentally change the practice of electrophysiology.

Mark’s time in the Public Health Service at Staten Island exposed him to intracardiac recording techniques, which at that time were used primarily for understanding abnormalities in the conduction system. It was revolutionary when Mark used these techniques to study ventricular tachycardia (VT), including stimulating and recording from the left ventricle during ongoing tachycardia. In a (distant) analogy, I remember being told by my young son’s hockey coach that we adults do everything we can to avoid ice, even when wearing study shoes. They were teaching our children how to do acrobatics on ice, despite wearing thin skates. In the same way, although almost everyone else in the world was deathly afraid of VT, Mark realised that the only way to understand this enemy well enough to devise therapy was to spend some time with it. From rigorous physiological investigation (anatomic and electrical substrate of VT, electrical stimulation during VT to determine the nature of the circuit) arose important therapeutic concepts: subendocardial resection, followed by catheter ablation of VT. This progression of physiology to therapeutic concept could only have been conceived by a quite limited number of investigators, but also required a great deal of work to bring to fruition. Mark and the all-star team he constructed, first at the University of Pennsylvania, then at Beth Israel Deaconess, provided the required mixture of creative spark and sweat equity. 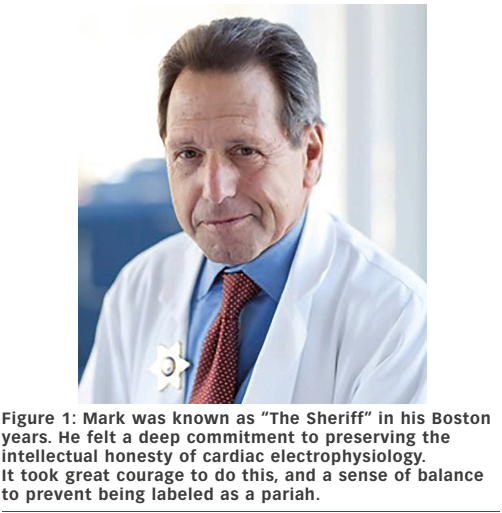 Mark was always questioning, even some of the very concepts he had brought to life. He seemed to have taken responsibility for the intellectual dignity of our field (see Figure 1). He cautioned against blind acceptance of guideline-based patient care, particularly in the setting of primary prevention implantable defibrillator (ICD) therapy. This was not because he did not believe in this powerful technology, but because he wanted it to be better. He abhorred the loss of physiological basis for much of the current practice of interventional electrophysiology, particularly as applied to ablation of atrial fibrillation. He constantly strove to remind us that physiological understanding must precede therapy. He was righteously indignant about the casual relationship to truth that too many clinical research manuscripts appear to have. To the very end of his life, he was always questioning our fundamental concepts and improving on available techniques. In 2016 he wrote important manuscripts exposing some of our misconceptions about recording of intracardiac electrograms, particularly as this applies to VT substrate mapping and the nature of the VT circuit.

How did this all get translated on a personal level? You might expect that Mark’s fierce expectations would overwhelm all possibility for close relationships. That is in fact what I expected, as a beginning student of electrophysiology. At a time when his lectures were completely undecipherable to me, he was deeply interested in trying to bring me into his life and work. I remember hours in his Gladwyne house, sitting around a table with him drawing figures of the VT circuit (How is VT initiated? How do we understand the response to stimulation? Are the VT circuit barriers fixed or functional?) which certainly inspired an enthusiasm for learning, but was far above my ability to grasp. It reminds me of a quote from a famous long-distance runner, who was being interviewed about the arduous hours of training involved. At the end of the discussion, the interviewer asked with reverent appreciation for the human struggle of running “Is there anything I can do for you?” The runner answered “Run with me.” Mark did not need my meager input to understand the intricacies of mind experiments about the nature of the VT circuit, but it was lonely to think about it by himself (see Figure 2). 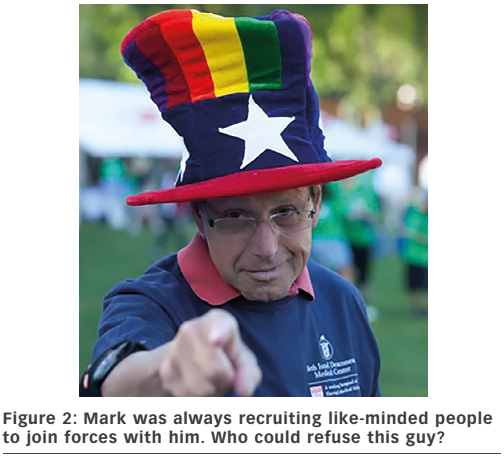 And so, I and many others benefitted greatly from his attempts. What were the rules of engagement? Never be anything less than completely honest. Always try your very hardest. It was nonsense to think that we could keep up with Mark and it would have been ridiculous for him to expect this. He was passionate about each of us becoming the best possible version of ourselves, both professionally and personally. What were the rewards? In addition to learning physiology in real time as it was being made from an expert teacher, the rewards for me included one of the most meaningful friendships of my adult life. I would have walked through fire for Mark, and I knew he would have done the same and even more for me. He was fiercely loyal, incredibly honest and always seemed to make me feel like I was so much stronger/smarter/ better than I really was (see Figure 3). I ache for the loss of his counsel and support. 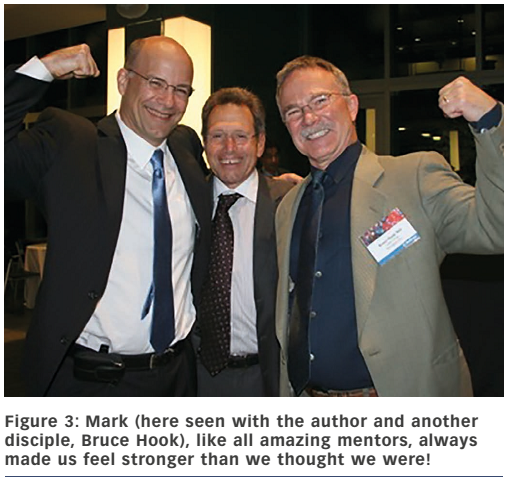 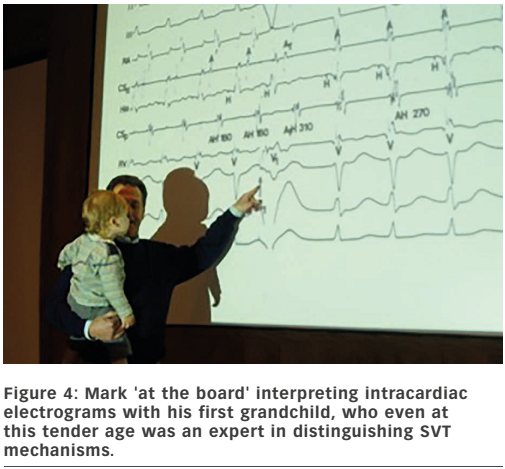 I was fortunate to have been close to him, but Mark was not about closing ranks to an inner sanctum. He was always reaching out, teaching, recruiting, encouraging. One of the enduring monuments to his love for teaching was the legacy of electrocardiography and intracardiac recording courses that he taught with his dear friend and kindred spirit Hein Wellens. Over 7,000 students participated in the rite of passage of interpreting tracings at the board over 35 years of courses throughout the world (see Figure 4). A remarkable number of these students admitted that they finally felt like a real cardiologist only after passing this milestone.

On 11 January 2017 we lost a transformative leader and a great friend. We have inherited what seems a tragically large responsibility to represent what Mark Josephson stood for, but we bear it with joy in dedication to his memory.