Anticoagulation is a mainstay of the treatment of AF, particularly in the context of an ablation procedure. NOACs are used in the majority of patients today, and the presentations in this session discussed effective integration of anticoagulants into everyday practice, including catheter ablation. The recent availability of antidotes to these increasingly popular drugs has provided reassurance to providers, and attendees learned from expert opinion on when and how to use them.

Uninterrupted NOAC: What Does It Mean?

Dr Luigi Di Biase from New York, US, summarised primary studies on NOACs to date. He stressed that, either where uninterrupted warfarin or NOACs are used, heparin is still needed during the procedure. In the heart of his presentation, Dr Di Biase presented his anticoagulation protocol.57 First, all patients are on warfarin before the procedures to achieve 4–6 weeks of therapeutic international normalised ratio (INR) before ablation is performed. Patients undergo ablation procedure on warfarin with INR ranges from 2–3.

In a multicentre, randomised study, use of this protocol showed that therapeutic INR protects against peri-procedural thromboembolic events in higher-risk patients.58 The risk of these complications during AF ablation is predominantly confined to patients with non-paroxysmal AF and, in particular, long-standing persistent AF. Therefore, Dr Di Biase said that future studies assessing the protecting value of newer anticoagulants should be performed in comparison with warfarin treatment, and should enrol patients with non-paroxysmal AF, as these events are relatively rare in paroxysmal AF patients. Recent data seem to suggest that, in patients undergoing AF ablation, uninterrupted rivaroxaban and apixaban provide similar stroke protection to warfarin. The results of another recent study showed fewer bleeding complications with uninterrupted dabigatran than uninterrupted warfarin and similar thromboembolic events.59

“With the use of uninterrupted NOACs, a higher amount of heparin is necessary to maintain ACT above 350 seconds during the procedure,” concluded Dr Di Biase. “However, more data are needed with the newer anticoagulants to understand the safety in the presence of major bleeding complications and the role of other upcoming drugs.” 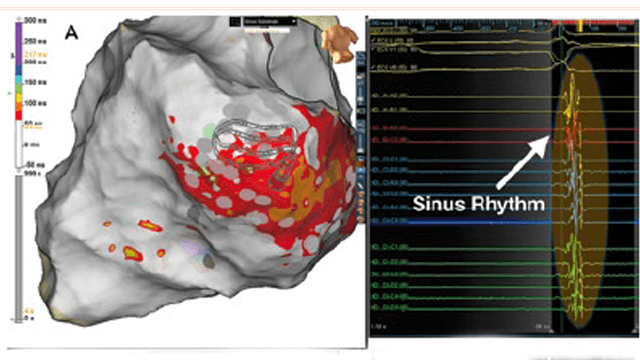