Techniques to ablate persistent atrial fibrillation (AF) continue to evolve. Recent technological and strategic innovations have included a focus on mapping and ablating AF sources. These attempts have not yet yielded a consistent improvement in clinical outcomes following AF ablation. Advancements in these techniques in the next few years, however, may enhance our ability to map and ablate AF as well as further our understanding of the mechanisms behind AF initiation, perpetuation, and recurrence.

Catheter ablation of AF has shown steady growth over the past two decades with a nearly 15 % annual increase in the US.1 This growth can be attributed in large part to four factors: an increase in operators and institutions performing the procedure;2 a steady rise in AF prevalence, which is predicted to reach 12 million in the US by 2030;3 a larger spectrum of AF patients with more complex atrial substrates being offered ablation;4 and the development of technologies such as the cryoballoon catheter, that have facilitated the ablation process. The increase in patients with persistent and long-term persistent AF undergoing ablation has highlighted the complexities and heterogeneity of AF mechanisms and challenged operators to optimise ablation strategies. While pulmonary vein isolation (PVI) alone has yielded favourable results for ablation of paroxysmal AF, success rates with PVI alone for patients with persistent AF have been significantly lower.5 Bolstered by advances in mapping technology, recent searches for alternative or adjunctive ablation strategies have included real-time mapping and ablation of potential AF sources. While some initial studies have described promising results utilising this strategy, randomised controlled trials evaluating its effectiveness are lacking. Appreciating the potential advantages and limitations of this strategy requires a fundamental knowledge of the mechanisms behind the initiation and perpetuation of AF. In this review, we will begin with a description of the current understanding of mechanisms driving AF, then discuss the challenges behind real-time AF mapping and signal analysis, and conclude with an evaluation of existing systems and strategies to target AF sources during ablation.

The proposed mechanisms of AF dating to the early 1900s include focal automaticity, organised re-entry or multiple re-entrant wavelets.6–9 Technological advances since then have allowed us to better conceptualise these principles. Focal triggers and drivers within the pulmonary vein muscle sleeves and in the antral regions of the pulmonary veins have been found to be the predominant mechanism of paroxysmal AF and wide-area PVI has yielded favourable results in patients with paroxysmal AF.10 In addition to the pulmonary veins, other areas identified to harbour focal drivers include the superior vena cava and the coronary sinus.11 While focal triggers may be the dominant mechanism in paroxysmal AF, multiple mechanisms often coexist in patients with persistent AF, with variable mechanisms accounting for the initiation and perpetuation of AF.

While focal sites of automaticity may be responsible for initiating episodes of AF, the explanations for maintenance of AF are largely divided into two general theories: ‘spatially distributed disorganisation’ versus ‘localised sources’. In the former, AF episodes are maintained by wavelets that continuously collide and generate other wavelets in a random and disorganised manner. This is in contrast to the ‘localised sources’ theory in which one or more discrete drivers are responsible for the perpetuation of AF.12 While settling this debate is beyond the scope of this review, enough evidence supports the presence of sustained rotors or organised atrial activity during most cases of AF to validate an investigation into the effects of their ablation.13

Among the challenges to distinctly visualise AF mechanisms are the limitations of traditional electrogram activation mapping using conventional catheters. This technology suffers from limited spatial and temporal resolution, the small region of atrial tissue able to be simultaneously recorded, and vulnerability to corruption from far-field signals.12 After signal acquisition, further analysis is necessary to identify potential ablation targets. Alternative mapping techniques can overcome some of these limitations to better understand AF mechanisms, although some of these technologies are not practical to utilise in vivo during ablation.

Utilising optical mapping with high spatial resolution in sheep hearts in which AF was induced, Jalife et al. characterised discrete high frequency re-entrant circuits during AF.14,15 These rotors consisted of circulating areas of conduction that spawned spiralling wavefronts of activation at their periphery (Figure 1). Although the concept of rotors and their contribution to sustained episodes of AF have now been well described, their properties and viability as effective ablation targets remain controversial. Initially, the spatiotemporal stability of these rotors was challenged. However, their reproducibility in experimental and clinical studies suggests their relative stability when appropriate mapping techniques are utilised.16 Whether these sources can be accurately and reproducibly identified during ablation and whether they represent practical and effective ablation targets to reduce long-term AF recurrences remains to be seen. 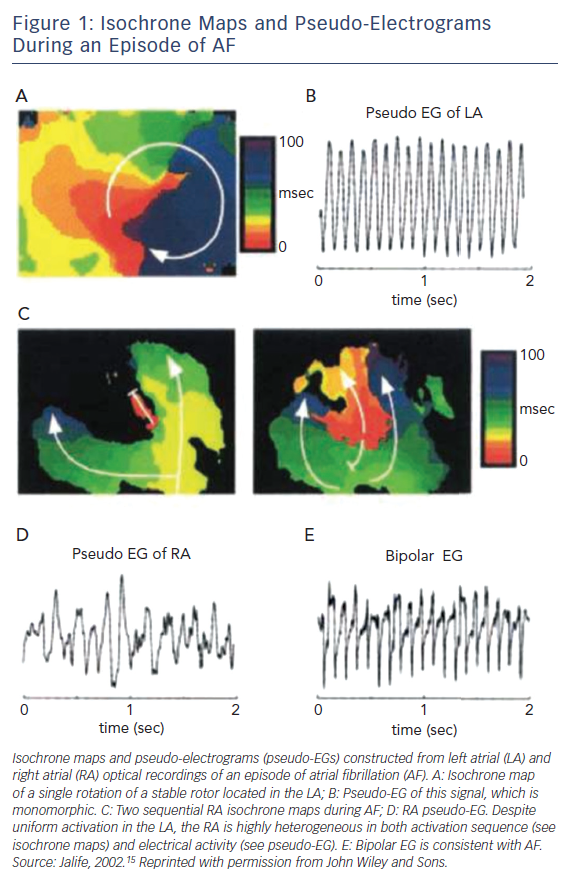 Early attempts to target AF sources were based on complex fractionated atrial electrograms (CFAEs) or dominant frequency (DF). Targeting of CFAEs was introduced by Nademanee et al. in 2004.17 The explanation for the effectiveness of targeting CFAEs is that rapidly conducting rotors give rise to adjacent areas of fibrillatory conduction that manifest as fractionated or continuous electrograms (Figure 2).18 Ablation at areas of CFAEs could therefore have the ability to eliminate local drivers of AF, and this was supported by the observation of AF termination with ablation at some CFAE sites. However, AF termination could also result simply from debulking of the atria or by ablation at sites modifying atrial autonomic innervation. A major limitation of CFAE ablation is its non-specificity in localising AF rotors. Furthermore, with the often extensive ablation that elimination of CFAEs may require, there is a risk of proarrhythmia in the form of atrial flutter/tachycardia. While still employed by some as an adjunctive strategy to PVI in ablation of persistent AF, data supporting this strategy are equivocal.19,20 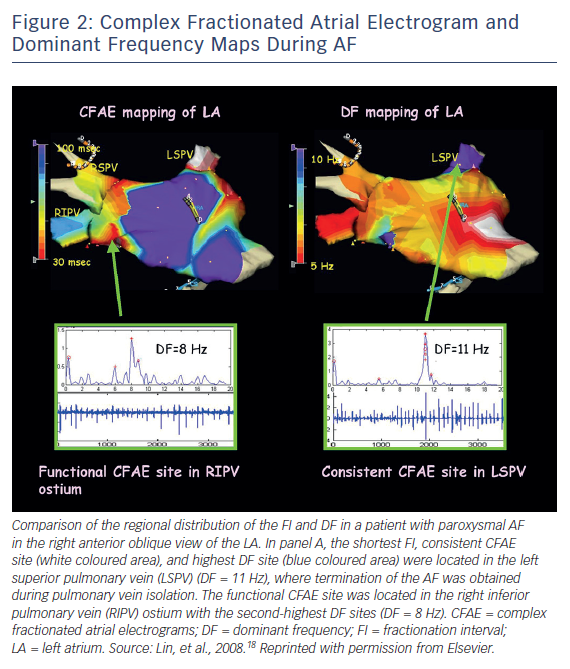 Another attempt to identify drivers during AF used spectral analysis of intracardiac electrograms to identify sites with high dominant frequency (Figure 2). Atrial locations with the highest DF values were believed to represent sites of high frequency rotors. Propagation from these locations led to a surrounding gradient of decreasing DFs. Clinical trials subsequently evaluated attempts at either directly targeting high DF sites or ablating with an endpoint of reducing global DF values. The results of these studies did not reveal an overall clinical benefit of ablation targeting high DF locations.21

Since then, technological advances have facilitated attempts to directly map wavefront propagation during AF instead of using secondary markers to localise AF sources. One such tool, called electrocardiographic imaging (ECGI), is a non-invasive system integrating a high-resolution surface ECG with up to 250 electrodes to a real-time computed tomography image of the heart. Body surface obtained electrograms are mapped to the epicardial surface of the heart to provide real-time activation mapping.22 Other strategies utilising intracardiac mapping technologies to directly map AF sources during catheter ablation are described below.

A recent technology for mapping and ablation of AF sources called the focal impulse and rotor modulation (FIRM) system was introduced by Narayan et al. The details of the signal processing utilised with this system remain proprietary, but important features include real-time electrogram acquisition with high spatial resolution, multi-electrode basket catheters placed simultaneously in both atria, use of a monophasic action potential catheter to define the dynamics of atrial repolarisation and use of local atrial conduction properties to reduce erroneous or far-field electrogram components.23 Sources of AF using this system were defined as either rotors (stable circular activation patterns around a centre with outward propagation), or focal impulses (centrifugal activation from a focal site of origin). To improve the specificity of the targets, sources were required to show stability with limited precession over a period of 10 minutes before they were targeted with ablation (Figure 3).24 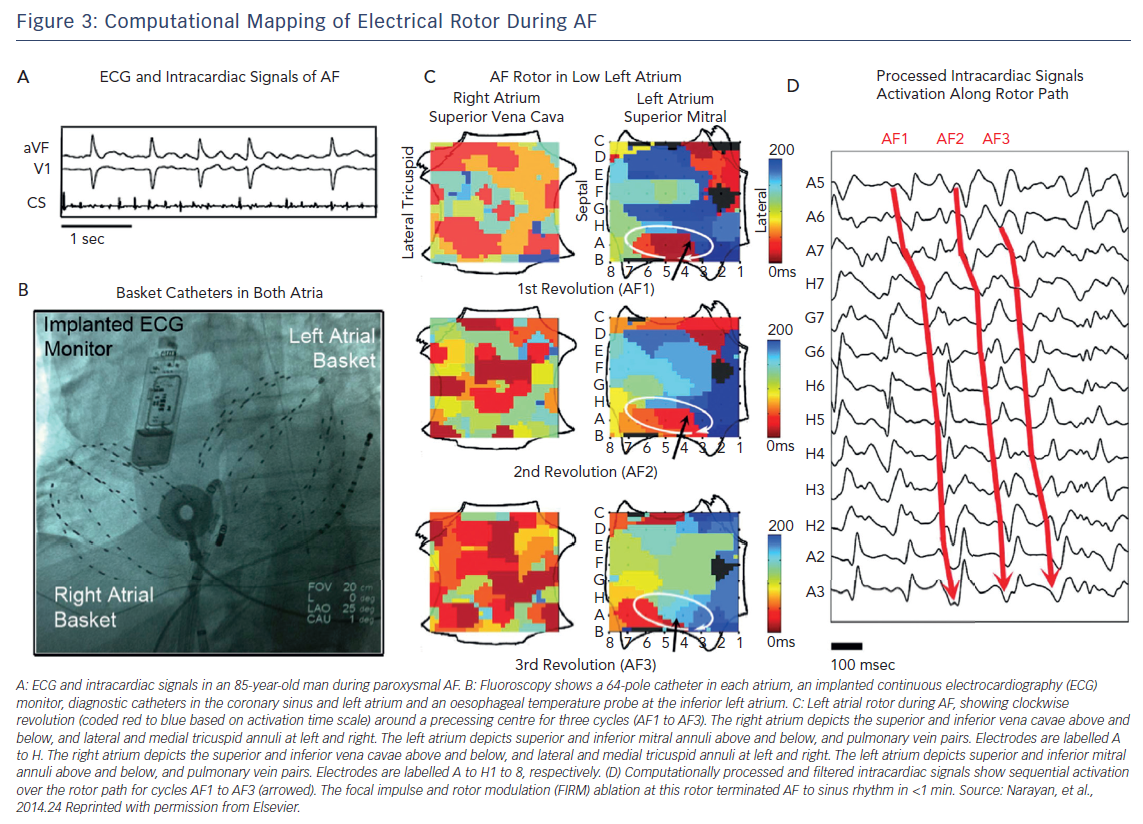 Early results utilising this method during 107 ablations performed at two centres showed AF termination in 56 % of cases (and AF slowing in an additional 30 %) after targeting a mean of 2.1 sources per patient. In this study, FIRM-guided ablation plus conventional ablation showed higher freedom from AF after a median of 273 days of follow-up (82.4 % versus 44.9 %; p<0.001) compared to conventional ablation alone after a single procedure.24 A recent single-centre registry of 170 patients undergoing FIRM-guided ablation showed termination of AF with ablation to sinus rhythm or atrial tachycardia in 59 % of patients with paroxysmal AF, 37 % of patients with persistent AF and 19 % of patients with long-standing persistent AF.25 Right atrial ablation terminated AF in 22 % of cases. Freedom from atrial arrhythmias at 1 year was 77 % for paroxysmal AF, 75 % for persistent AF and 57 % for long-term persistent AF.

Further publications from other centres have had mixed results.26,27 A recent meta-analysis comparing 511 patients undergoing AF ablation utilising a strategy of PVI plus FIRM to 295 patients undergoing PVI alone suggested similar 1-year success rates off antiarrhythmic medications between the PVI plus FIRM versus PVI alone groups (50 % versus 58 %, p=0.21).28 Another meta-analysis comparing ablation targeting drivers for AF to conventional strategies across 30 studies showed a higher rate of freedom from atrial arrhythmias at one year (RR 1.34, 95 % CI [1.05–1.70]; p=0.02) when targeting AF sources.29 The majority of the studies in this analysis, however, were not randomised and the strategies employed in both the study and control arm were varied. These analyses highlight the necessity for a large-scale randomised controlled trial directly comparing ablation targeting AF sources to conventional strategies.

While FIRM-guided ablation likely represents the most rigorous attempt to directly map and ablate AF sources, other studies have evaluated alternative techniques. One recent study looked at a much simpler electrogram activation map-guided approach.30 In this study, a 20-pole high-density mapping catheter was used to visually identify sites of centrifugal activity presumed to be AF sources. These sites were ablated along with sites where there was defragmentation. Only a minority of patients (9 %) experienced AF termination after ablating the presumed sources and the improvement in freedom from AF at 1 year (57 % versus 38 %, p=0.009) compared with a traditional step-wise approach was driven by a reduction in recurrences of atrial tachycardia. Another panoramic mapping system using a 64-pole basket catheter (CARTOFINDER, Biosense Webster) was recently introduced for mapping and ablation of AF sources. An initial study reported identifying AF sources in 19 of 20 patients, with AF termination during ablation at 12 of 26 identified drivers and AF slowing at an additional 10 locations.31 Long-term clinical results utilising this system are pending.

Ablation targeting AF sources presents an exciting new technology that warrants further investigation as a potential adjunctive ablation strategy. However, clinical studies to date have not yielded sufficient evidence to substantiate superiority to conventional ablation strategies. Several explanations may account for this. Existing mapping technology may identify some but not all AF sources responsible for maintaining AF. The ability to effectively ablate identified sources may also be limited, either in terms of the precise localisation of ablation lesions or the ability to provide durable, transmural lesions. The most significant reason, however, may be that even durable ablation of current AF sources may not sufficiently alter the atrial substrate to prevent the emergence of other drivers. This problem is compounded by the fact that the atrial substrate itself often changes over time, promoting recurrences of AF despite effective ablation of previous drivers.

The mechanisms driving the initiation and perpetuation of AF remain complex and incompletely understood. Experimental and clinical mapping technologies have demonstrated the ability to identify local and stable sources that may contribute to the perpetuation of AF. Ablation of these sources has not yet consistently and reproducibly translated to improved clinical outcomes. This is probably due to multiple reasons, including limitations in the currently available mapping and ablation technologies and our incomplete understanding of the most reliable strategy for the long-term elimination of AF. These issues are being addressed by many investigators and it seems likely that improvements in our ability to identify and ablate current and future AF sources will improve over the next few years.