Catecholaminergic polymorphic ventricular tachycardia (CPVT) is a rare but severe genetic cardiac arrhythmia disorder, with symptoms including syncope and sudden cardiac death due to polymorphic VT or ventricular fibrillation typically triggered by exercise or emotions in the absence of structural heart disease. The cornerstone of medical therapy for CPVT is β-blockers. However, recently flecainide has been added to the therapeutic arsenal for CPVT. In this review we summarise current data on the efficacy and role of flecainide in the treatment of CPVT.

Disclosure:The authors have no conflicts of interest to declare

Mutations in the RYR2 gene, which encodes the cardiac ryanodine receptor calcium release channel (RyR2), can be identified in the vast majority of the CPVT cases and follow an autosomal dominant inheritance pattern,2 whereas a small percentage of cases are due to homozygous or compound heterozygous mutations in the gene encoding cardiac calsequestrin (CASQ2).3 Both RyR2 and CASQ2 are involved in intracellular calcium homeostasis in the cardiomyocyte. Mutations in these genes mainly cause diastolic calcium leakage from the sarcoplasmatic reticulum through the RyR2 receptor, eventually resulting in delayed afterdepolarisations and triggered activity, which is most pronounced during states of sympathetic activation.4 Other genes that have been discovered and only represent a small percentage of CPVT cases are TRDN (encoding triadin) and CALM1 (encoding calmodulin).5,6 Mutations in the CALM2 gene have been associated with overlapping features of the congenital long-QT syndrome and CPVT.7 A yet-to-be-identified gene on chromosome 7p14–p22 has been linked to a highly malignant autosomal recessive form of CPVT. This phenotype is characterised by exercise-induced ventricular arrhythmia, and patients have a minor QT prolongation.8 Approximately 40 % of the CPVT cases remain mutation negative.9,10

Untreated, CPVT has a high mortality rate of up to 30 % among individuals with the classic phenotype who are aged <40 years.9,11 Since CPVT was first described,12 β-blockers have been acknowledged for their efficacy in its treatment, and they have remained the cornerstone of therapy to date.13 However, a significant percentage of CPVT cases remain symptomatic despite receiving adequate β-blocker therapy or suffer from severe side-effects such as fatigue due to β-blocker therapy.2,9,14 Up until a few years ago, patients who remained symptomatic despite receiving β-blocker therapy could only be additionally protected by an implantable cardioverter defibrillator (ICD).

Flecainide, a class 1c antiarrhythmic drug, was synthesised in 1972 and approved by the US Food and Drug Administration in 1984 for the suppression of VT. Orally administered flecainide is rapidly absorbed and has a 90 % bioavailability after ingestion. Flecainide is metabolised by cytochrome P450 (CYP)2D6 and CYP1A2 before it is renally excreted. In healthy subjects, peak plasma levels are reached after 2–3 hours and steady-state levels are achieved within 3–5 days. The elimination half-life of flecainide is 12–27 hours.16,17 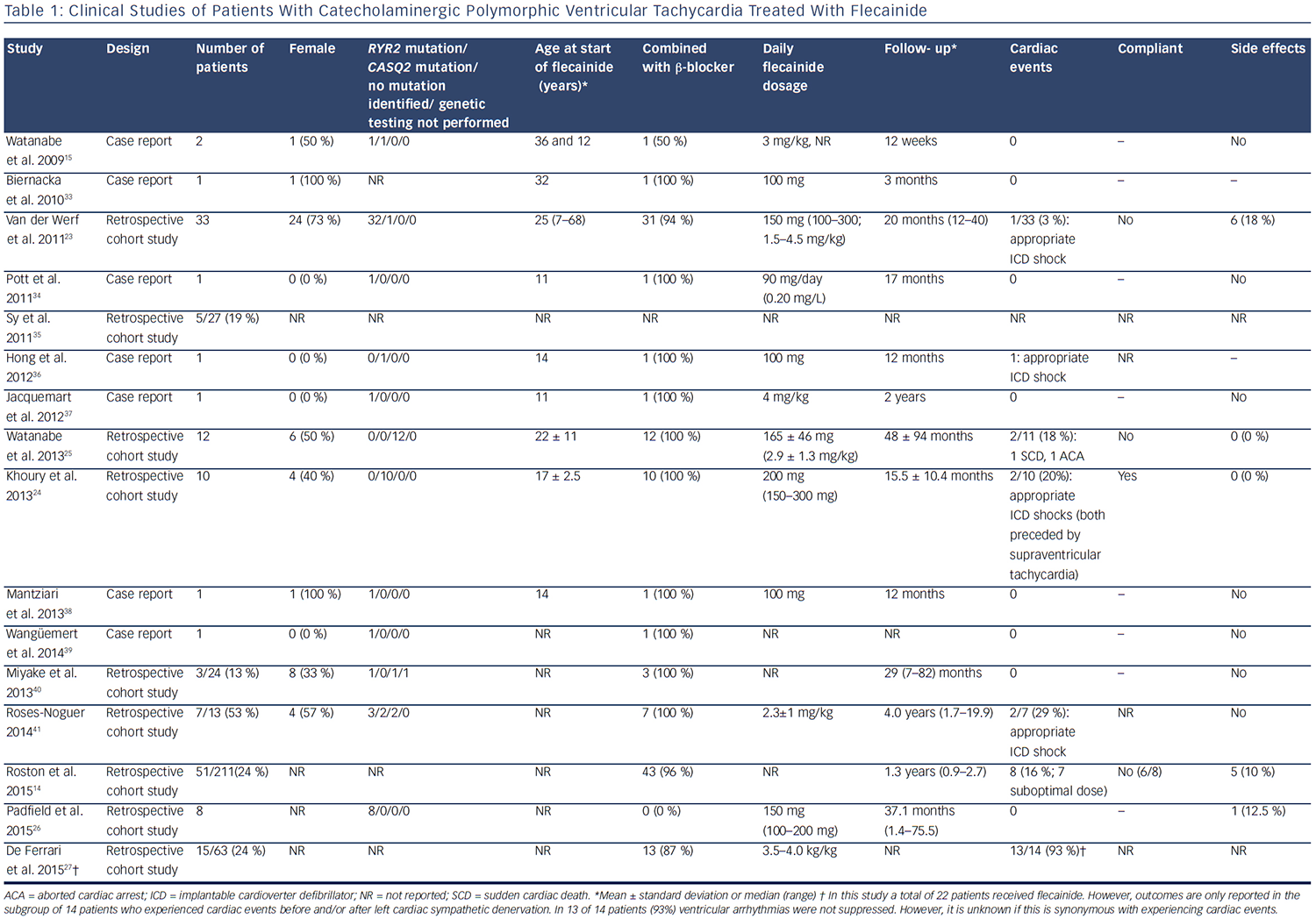 In 2009, the first study on the efficacy of flecainide in patients with CPVT showed that flecainide dramatically reduced rates of calcium sparks in vitro and ventricular arrhythmias in vivo in a CASQ2-knockout mouse model.15 In in vitro studies in isolated cardiomyocytes flecainide reduced the duration of RyR2 channel opening. This effect was most pronounced in the setting of RyR2 activation by high luminal calcium with flecainide. This situation mimics spontaneous calcium release through the sarcoplasmatic reticulum, which triggers ventricular arrhythmias in patients with CPVT. Flecainide reduced spontaneous calcium spark frequency in isolated cardiomyocytes. In vivo flecainide completely suppressed VT in all mice. This discovery led to the successful treatment of two severely affected patients.15 The proposed mechanism of action is that, apart from the known sodium channel-blocking effect, flecainide has an additional direct-blocking effect on the RyR2 channel, through which it inhibits triggered activity.15 However, two other groups have independently opposed this mechanism and proposed an alternative mechanism by an effect that could solely be attributed to the sodium channel-blocking properties of the drug.18–20 It has also been suggested that a potential action of flecainide is by an indirect effect on RyR2 through binding to calmodulin or other modulators of RyR2.21

Apart from flecainide, the only other class 1c antiarrhythmic drug available in the US that has been shown to block RyR2 channels is propafenone.22 Propafenone was effective in suppressing calcium waves in vitro and reduced the rate of ventricular arrhythmias in CASQ2-knockout mice.22 Propafenone was also tested in a 22-year-old patient with CPVT carrying the p.L4105F RYR2 mutation who suffered from frequent appropriate ICD discharges and who was refractory to conventional therapy (excluding flecainide). Propafenone was prescribed because flecainide is not available in Turkey. The use of propafenone led to a significant decrease in the frequency of ICD discharges and complete ventricular arrhythmia suppression on exercise testing at 12 months of follow-up.22

Since 2009, there have been 15 published clinical studies on flecainide treatment in patients with CPVT (see Table 1). The first relatively large cohort included 33 genotype-positive patients (1 CASQ2 and 32 RYR2 mutation carriers) and evaluated the efficacy of flecainide in difficultto- treat patients who were either symptomatic on maximally tolerated therapy or had persistent severe ventricular arrhythmias despite maximally tolerated therapy.23 The vast majority of these patients used flecainide in combination with a β-blocker (94 %), whereas two patients used flecainide as monotherapy due to significant side effects of β-blockers. Partial or complete suppression of the ventricular arrhythmias was achieved in 76 % of patients. During a mean follow-up of 20 months, one patient suffered from an episode of several appropriate ICD shocks due to confirmed non-compliance.23 Subsequently, the efficacy of flecainide was confirmed in a relatively large cohort of homozygous CASQ2 D307H mutation carriers.24 In this study, all patients used flecainide in combination with β-blockers. After the initiation of flecainide, the ventricular arrhythmia burden decreased in all patients and during a mean follow-up of 15.5 ± 10.4 months, and two patients suffered from appropriate ICD shocks, which in both cases were preceded by supraventricular tachyarrhythmias.

Figure 1: ECGs at Maximum Heart Rate During Exercise Testing Before and After Drug Treatments in a Female Patient with Catecholaminergic Polymorphic Ventricular Tachycardia 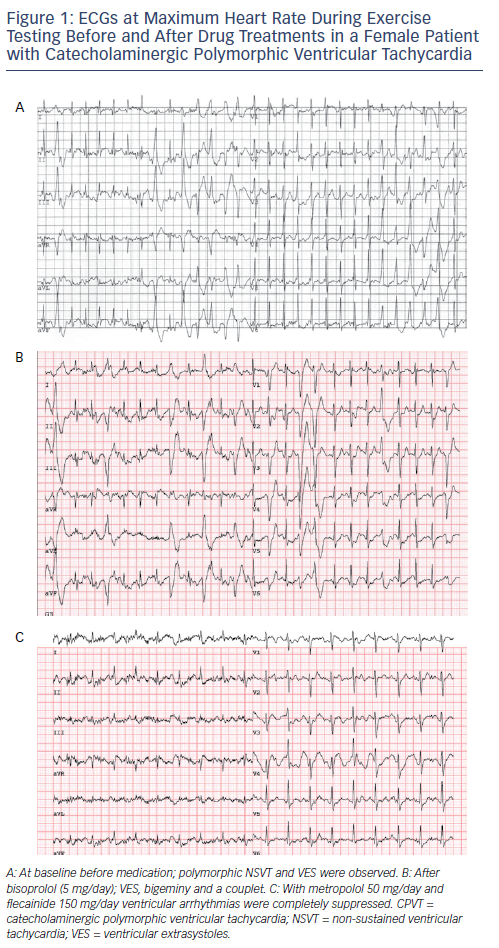 Flecainide also suppressed ventricular arrhythmias in patients without a proven pathogenic mutation in the RYR2, CASQ2 or KCNJ2 genes.25

This study consisted of 12 patients, all of whom showed ventricular arrhythmias despite maximal tolerated therapy. During a mean followup of 48 months, two patients experienced a cardiac event due to non-compliance. To the best of our knowledge, only sporadic cases have been treated with flecainide monotherapy, most often due to the significant side-effects of β-blockers. In a small retrospective cohort consisting of nine patients carrying RYR2 mutations, all intolerant to β-blockers, no patient suffered from treatment failure during a median follow-up of 37.1 months.26 Therefore, flecainide monotherapy may potentially be considered an option for patients that are intolerant to β-blockers.

A placebo-controlled, randomised crossover trial of flecainide in patients with CPVT assessing the efficacy of flecainide in reducing cardiac events in CPVT is ongoing (ClinicalTrials.gov ID NCT01117454). One study that focused on left cardiac sympathetic denervation (LCSD) reported a high number of patients without ventricular arrhythmia suppression despite treatment with flecainide and β-blockers and/or LCSD.27 However, it is unknown whether these patients also experienced cardiac events. In addition, this is a highly symptomatic cohort of whom 19 % experienced cardiac events within 2 years after LCSD. Overall, the studies published so far have reported treatment failure to be most frequently associated with non-compliance or suboptimal flecainide dosing (see Table 1).

At present, exercise restriction and β-blocker treatment are the cornerstone of therapies in patients with CPVT.13 The current consensus is to treat each patient with a clinical or genetic diagnosis of CPVT with the highest tolerable dose of β-blockers. A robust comparison between different types of β-blockers has not been performed, but there is growing evidence that nadolol, a long-acting drug, is the most effective β-blocker in terms of ventricular arrhythmia suppression and cardiac event rates.9,28 Other nonselective β-blockers such as propanolol might be an alternative in those countries where nadolol is not available.13

LSCD and/or ICD implantation may be considered in patients who remain symptomatic or continue to have persistent arrhythmias despite treatment with β-blockers and flecainide. Although the beneficial effects of flecainide in patients with CPVT patients seem overt, one must exercise caution with regard to the pro-arrhythmic effects of flecainide. The Cardiac Arrhythmia Suppression Trial (CAST) has shown that class I antiarrhythmic drugs are associated with an increased rate of sudden cardiac death in post-infarct patients when compared with placebo.31 Therefore, a contraindication has been issued for patients with a structural heart disease and a history or suspicion of coronary artery disease. It is thought that flecainide can become pro-arrhythmic due to myocardial conduction velocity slowing, which may consequently trigger re-entry and may be particular relevant in the setting of myocardial ischaemia. It is recommended that heart rate-related QRS prolongation is closely monitored on the exercise test; if the QRS interval is prolonged by >25 %, flecainide dosing should be decreased or discontinued. It is, however, reassuring that in the published reports a proarrhythmic effect of flecainide has not been observed in patients with CPVT. Furthermore, data accumulated over the past 27 years indicate that flecainide is safe to use in carefully selected patients without structural heart disease.32 Additionally, long-term (27–29 years) follow-up data have been reported for two patients with CPVT patients on flecainide.23,25

Preliminary results with flecainide in patients with CPVT are encouraging. However, a larger study with long-term follow-up is needed to fully elucidate the efficacy of flecainide, in particular its ability to prevent cardiac events in the long term. 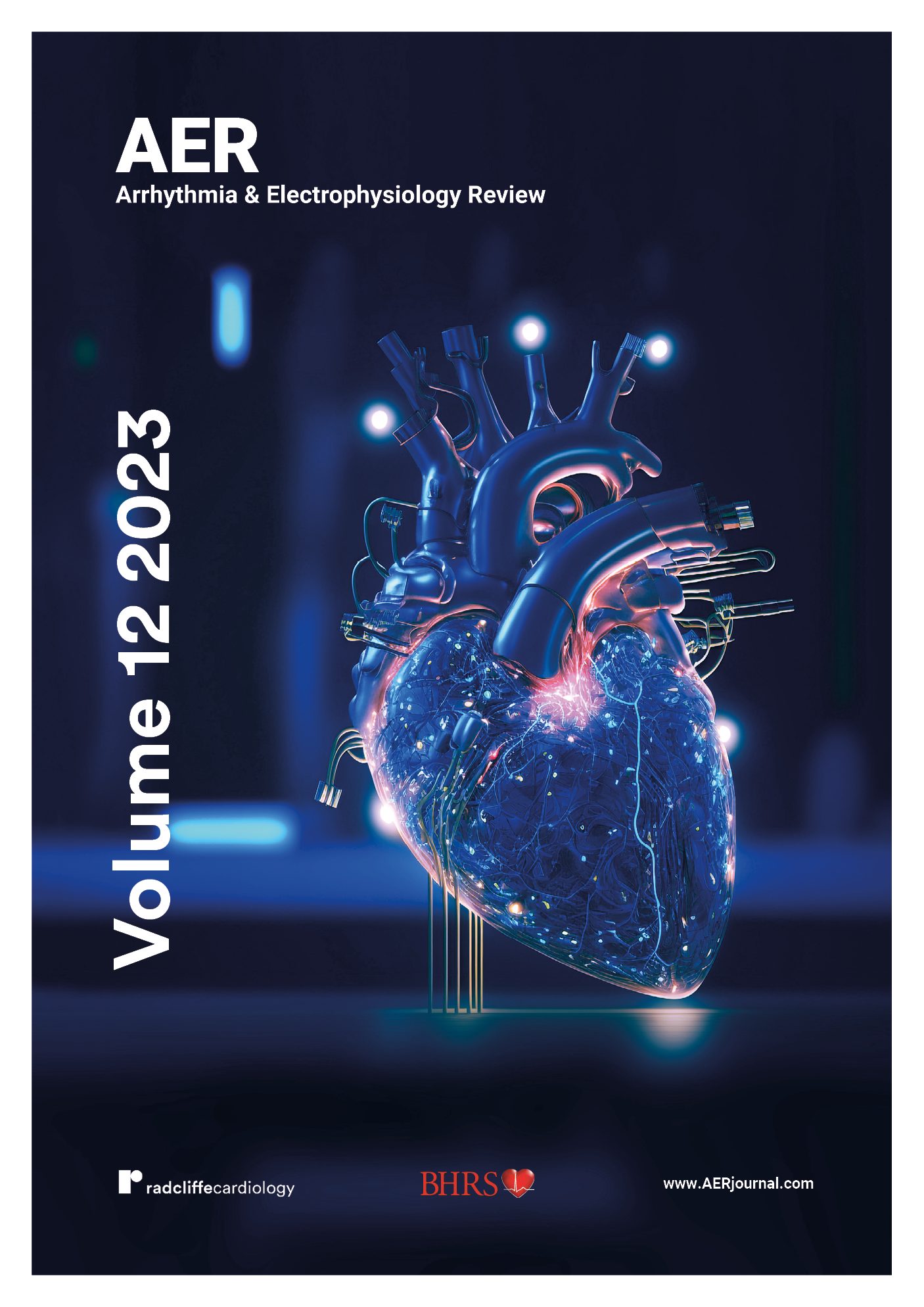 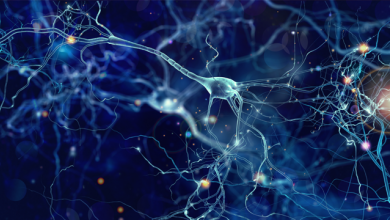